film festivals nomadland searchlight TORONTO by Caroline Russo | on July 27, 2020 | 0 comments | in Film News | Like it

Searchlight Pictures Chairmen Nancy Utley and Steve Gilula announced today a series of global screenings to commemorate Chloé Zhao’s upcoming feature film NOMADLAND’s invitations to Venice, Toronto, Telluride, and New York Film Festivals. Zhao’s third film, an exploration of modern-day van dwelling life on the road, will World Premiere with simultaneous screenings on September 11th at the 77th Venice International Film Festival and the 45th Toronto International Film Festival, both of which will feature virtual introductions by producer, writer, editor, and director Zhao, and producer and actor Frances McDormand. Telluride, which canceled its 47th edition due to the global pandemic, will host a special “Telluride from Los Angeles” drive-in screening in Southern California later in the evening, featuring in-person appearances by Zhao and McDormand. Additionally, the New York Film Festival announced NOMADLAND as the Centerpiece Selection of the 58th edition of the festival, leading into a domestic theatrical release this fall, subsequently rolling out internationally.

NOMADLAND marks the first project between Zhao and Searchlight and the fifth between McDormand and Searchlight. McDormand won an Oscar for her performance in Martin McDonagh’s film Three Billboards Outside Ebbing, Missouri, which Searchlight released globally in 2017. Zhao adapted NOMADLAND from journalist Jessica Bruder’s 2017 non-fiction book Nomadland: Surviving America in the Twenty-First Century following McDormand and producer Peter Spears’ acquisition of the literary adaptation rights shortly after publication. The film follows Fern (McDormand), a woman who, after the economic collapse of a company town in rural Nevada, packs her van and sets off on the road exploring a life outside of conventional society as a modern-day nomad. The film features real nomads Linda May, Swankie, and Bob Wells as Fern’s mentors and comrades in her exploration through the vast landscape of the American West.

“The American road fascinates me. It’s heartbreakingly beautiful and deeply complicated. I’ve traveled it for many years and always hoped to capture a glimpse of it. I’m thankful to be able to make NOMADLAND and excited for audiences to join Fern on her adventure,” said Zhao.
“NOMADLAND is a true cinematic discovery,” said Utley and Gilula. “We are grateful to Chloé and the entire NOMADLAND filmmaking team and to the festival community that is essential to the success of independent films, and we thank Alberto and Giulia, Julie and Tom, Cameron and Joana, and Eugene and Dennis for the opportunity to be a part of this unique time in our industry’s changing landscape. Chloé reminds us that film has the power to connect us no matter how far apart we might seem. We hope this special film can move audiences across the world and further support global cinema.”

“It is both a great pleasure and honor to be part of Chloé Zhao’s new film’s unveiling to the world,” said Venice International Film Festival Director Alberto Barbera. “NOMADLAND is a brave and touching journey into a world that exists under the radar of mainstream social consciousness. It is a film that acquires particular meaning in a moment of pandemic induced seclusion, proving that values like mutual support and a strong sense of community can save us from solitude, failure, and despair. I am also happy to share the opportunity to support this beautiful film with our fellow festivals of Telluride, Toronto, and New York: a concrete sign of solidarity and collaboration in this unprecedented and difficult time.”

“We can’t wait for Toronto audiences to fall in love with NOMADLAND as we did,” said TIFF Co-Heads Joana Vicente and Cameron Bailey. “Frances McDormand’s heartbreaking performance and Chloé Zhao’s wise embrace of American outcasts make this a film everyone should see. We’re proud to join our colleagues in Venice, Telluride, and New York in presenting this terrific new film from Searchlight.”

“Chloe’s understanding and depiction of the layered beauty of the human experience achieves new heights in NOMADLAND,” said Telluride Film Festival executive director Julie Huntsinger. “Tom Luddy and I believe in her vision and are grateful to unite with our colleagues in Toronto, Venice, and New York to highlight this sensitive and stunning achievement.”

“We knew that Chloé Zhao’s masterful film, NOMADLAND, deserved a central spot at the New York Film Festival as soon as we saw it,” said Eugene Hernandez, Director of the New York Film Festival, “It was hardly surprising to learn that the film had also resonated with our friends in Venice, Telluride, and Toronto. We’re elated to share Chloé and Fran’s remarkable achievement with New York audiences this fall, in solidarity with our festival colleagues.”

“We are honored to have Chloé back at the festival with her most ambitious and moving work to date,” said New York Film Festival director of programming Dennis Lim, who chaired the festival’s Main Slate selection committee. “Anchored by Frances McDormand’s indelible performance, NOMADLAND is a road movie for our precarious times, and it establishes Chloé as one of the most clear-eyed and humane observers of life on the American margins.”

NOMADLAND is produced by Frances McDormand (HBO’s Olive Kitteridge) Peter Spears (Call Me by Your Name), Mollye Asher (The Rider), Dan Janvey (Beasts of the Southern Wild), and Chloé Zhao (The Rider). In addition to McDormand, the film features David Strathairn (Good Night, and Good Luck.). Zhao reunites with her cinematographer on The Rider, Joshua James Richards (God’s Own Country). The film features compositions by Italian composer Ludovico Maria Enrico Einaudi and film editing by Zhao. At Searchlight, the film was overseen by Presidents of Production Matthew Greenfield and David Greenbaum and Vice President of Production Taylor Friedman. Zhao is a film director, screenwriter, editor, and producer known for her work on her debut feature film, Songs My Brothers Taught Me (2015), which premiered at the Sundance Film Festival. Her second feature film, The Rider (2017), received several accolades including nominations for Independent Spirit Award for Best Film and Best Director. Zhao directed the upcoming Marvel Studios release Eternals, set for release in 2021 by Walt Disney Studios.

ABOUT THE 77TH VENICE INTERNATIONAL FILM FESTIVAL
The 77th Venice International Film Festival is organized by La Biennale di Venezia and directed by Alberto Barbera. It will take place at Venice Lido from September 2 to 12, 2020. The Festival is officially recognized by the FIAPF (International Federation of Film Producers Association). The aim of the Festival is to raise awareness and promote international cinema in all its forms as art, entertainment and as an industry, in a spirit of freedom and dialogue. The Festival also organizes retrospectives and tributes to major figures as a contribution towards a better understanding of the history of cinema.

ABOUT THE 45TH TORONTO INTERNATIONAL FILM FESTIVAL
The 45th edition of the Toronto International Film Festival, taking place September 10 to 19, 2020, is tailored to fit the moment, with physical screenings and drive-ins, digital screenings, virtual red carpets, and industry talks. This year’s selection comprises a lineup of 50 new feature films, five programs of short films, as well as interactive talks, film cast reunions, and Q&As with cast and filmmakers. TIFF is a not-for-profit cultural organization whose mission is to transform the way people see the world through film. An international leader in film culture, TIFF projects include the annual Toronto International Film Festival in September; TIFF Bell Lightbox, which features five cinemas, major exhibitions, and learning and entertainment facilities; and innovative national distribution program Film Circuit. The organization generates an annual economic impact of $189 million CAD. TIFF Bell Lightbox is generously supported by contributors including Founding Sponsor Bell, the Province of Ontario, the Government of Canada, the City of Toronto, the Reitman family (Ivan Reitman, Agi Mandel and Susan Michaels), The Daniels Corporation and RBC. For more information, visit tiff.net.

ABOUT THE 47TH TELLURIDE FILM FESTIVAL
The prestigious Telluride Film Festival ranks among the world’s best film festivals and is an annual gathering for film industry insiders, cinema enthusiasts, filmmakers and critics. TFF is considered a major launching ground for the fall season’s most talked-about films. Founded in 1974, Telluride Film Festival, presented in the beautiful mountain town of Telluride, Colorado, is a four-day international educational event celebrating the art of film. Telluride Film Festival’s long-standing commitment is to join filmmakers and film connoisseurs together to experience great cinema. The exciting schedule, kept secret until just before Opening Day, consists of over three dozen filmmakers presenting their newest works, special Guest Director programs, major Tributes to guest artists, special events and remarkable treasures from the past. Telluride Film Festival is a 501 (c)(3) non-profit educational program. Festival headquarters are in Berkeley, CA.

ABOUT THE 58TH NEW YORK FILM FESTIVAL
Presented by Film at Lincoln Center, the 17-day New York Film Festival highlights the best in world cinema and continues a more than 50-year tradition of introducing audiences to bold and remarkable works from celebrated filmmakers as well as fresh new talent. The New York Film Festival has been a centerpiece of New York film culture since 1963, introducing US audiences to the most essential new cinematic works from around the world. Support for the New York Film Festival is generously provided by Official Partners HBO and Campari, Benefactor Partner Netflix, Supporting Partners Radeberger Pilsner and Bloomberg Philanthropies, Contributing Partners Harken Wine and Hudson New York-an SBE Hotel, and Media Partner WNET New York Public Media. American Airlines is the Official Airline of Film at Lincoln Center. Film at Lincoln Center receives generous, year-round support from the National Endowment for the Arts and the New York State Council on the Arts with the support of Governor Andrew M. Cuomo and the New York State Legislature. For more information, visit www.filmlinc.org and follow @TheNYFF on Twitter and Instagram. 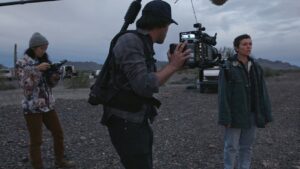