2020 ALAE HitMeWhereItHurts MusicTours2020 NZArtists SummerThing by Caroline Russo | on March 6, 2020 | 0 comments | in Concerts | Like it 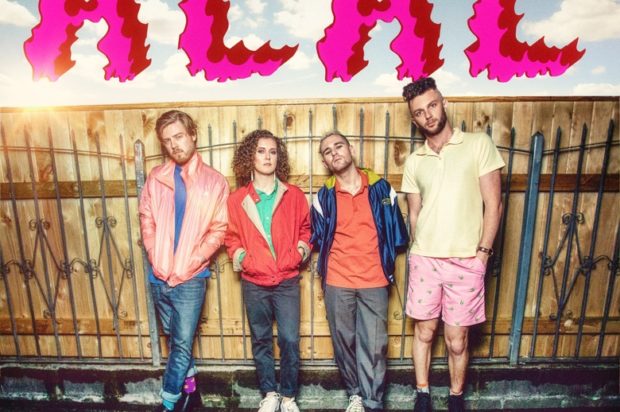 Alae are set to heat up the Aussie Summer with a slice of pop perfection via their new single: ‘Summer Thing.’ The second release is from their forthcoming five-track EP coming out in June. Bottling sunshine into 3 minutes of top-down, head-nodding, sun-kissed euphoria, ‘Summer Thing’ continues the Band’s journey into Chart territory, which began with the radio smash, ‘Hit Me Where it Hurts.’

‘Summer Thing’ plays with the idea of a love match so perfect, it feels as good as Summer. Taking that thought and running in a different direction is award-winning directing-duo ‘Vision Thing’ who again partner with Alae to create the single’s accompanying video: “This song is so catchy we’re pretty sure it’s going make even Goths want to dance on the beach. So that’s the idea we pitched to the band: a male goth trying to win over a female goth with a sick song and some slick moves. We’re really proud of this video. These guys are amazing to work with. They’re as chill and trusting as they are talented. Pretty sure they’re going to be kings of the world in the not too distant future.”

The year has only just begun, but it’s already been a big year for Alae. After seeing in 2020 with a repeat performance at ‘Rhythm & Vines’ in Gisborne, NZ the band have also collaborated with local hip-hop hero Kings, to release a second remix of ‘Hit Me Where It Hurts.’ A headline set at Auckland’s Pride celebration ‘Big Gay Out’ bought the noise to a 10,000-strong crowd early February. More live dates are on the cards, with a tour across New Zealand and Australia in the works for May 2020.

Alae’s hit single ‘Hit Me Where it Hurts’ was used for a TV 3 Summer campaign on NZ TV, has hit 400k streams & has a ground breaking music video with 5 different directors (watch The Project NZ interview below for more info)! Was Top 5 Shazam song in NZ and was the Number 1 Radio Airplay song for 4 weeks running IMNZ Radio Charts. Alae were also featured in Billboard