Nickelodeon Australia sea world SLIME CUP by Caroline Russo | on March 28, 2017 | 0 comments | in Entertainment | Like it 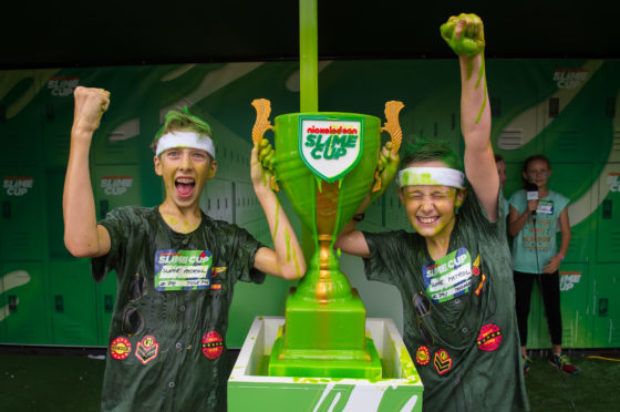 Following a hugely successful first season, Nickelodeon Australia is bringing back the slime with family-favourite adventure series SLIME CUP! With crazier challenges, bigger spills, and even more ways for kids to get covered head-to-toe in slime, the six-episode series, hosted by Kristy Best, will premiere on Nickelodeon on Friday, 30th June at 5.30pm.

Kids across Australia and New Zealand need to partner up with their sibling or best friend and audition to be one of the 15 teams selected to take part in the Slime Arena and battle it out for the ultimate title.

SLIME CUP is open to all kids aged 9 – 13 in Australia and New Zealand. To enter, kids can either submit their audition videos online or pre-register to complete a series of challenges at on-ground events. For the first time ever, Nickelodeon is bringing SLIME CUP live tryouts to Queensland (Sunday, 9 April from 9am – 4pm at Sea World on the Gold Coast) and returning to NSW (Sunday, 23 April from 9am – 4pm at Westfield Mt Druitt).

From the live tryouts and online auditions, 15 teams of superstar besties will be selected to compete in the Slime Arena and take on a series of larger-than-life inflatable challenges that will test their stamina, strength and stomachs to determine the final four teams. The Finale episode will see these four teams compete on an all-new inflatable obstacle extravaganza to win the ultimate prize, the 2017 Nickelodeon SLIME CUP trophy.

One of the family highlights of SLIME CUP 2016 was the parents or teachers involvement, where adults were put in the drop zone and covered in ‘stank’ if their team received one of the two slowest times. In 2017 Nickelodeon is bringing back the parents for a whole new messy challenge.

SLIME CUP will be hosted by Kristy Best and a U.S. based Nickelodeon star yet to be announced. Sydney-based Kristy will be front and centre on the sidelines reporting on the slime, the wipe-outs and the wacky challenges kids will face throughout the series.

Kids who think they have got what it takes to be Nickelodeon’s next Slime Superstars can go to www.slimecup.com.au to register for the Gold Coast and Sydney live tryout days or submit their best audition video up until Tuesday, 25th April 2017.

SLIME CUP will premiere on Nickelodeon at 5.30pm on Friday, 30th June 2017. Kids can check out www.slimecup.com.au to create their own SLIME CUP courses, watch short-form clips, play games and see all the behind-the-scenes action.