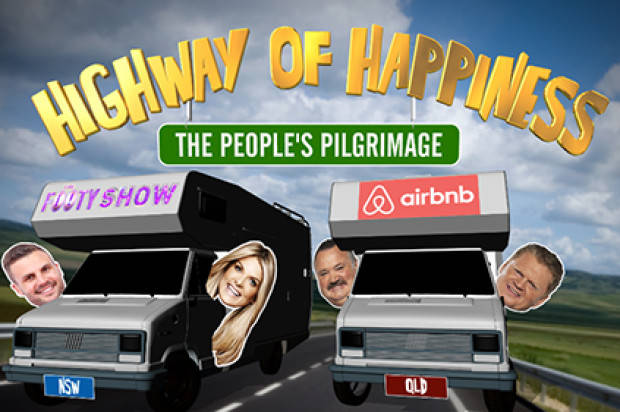 The NRL Footy Show will present one of the biggest events in its 22-year history, the huge Highway of Happiness tour, all the way from Brisbane to Sydney – starting Thursday, July 23, at 8.30pm on Channel Nine.

Over three weeks The Footy Show panellists, travelling in crazy pairs, did the trip along two separate routes. Erin Molan and Beau Ryan made their way through Ipswich, the Gold Coast, Mullumbimby, Woolgoolga, Armidale and Tamworth, while Paul “Fatty” Vautin and Darryl “The Big Marn” Brohman journeyed through Toowoomba, Goondiwindi, Warialda, Gunnedah, Quirindi and Newcastle.

Partnering with worldwide accommodation leader, Airbnb, who rescued them at various times throughout the trip, never have the gang been in such close proximity to each other for such a long time:

Big Marn said: “I really enjoyed spending a few days with Fat. Even though we have been mates for 35 years, I had never been able to spend quality time like we did on our Highway of Happiness tour. The fans were amazing as well. It’s nice to know that people really like what we do. Loved it!”

Fatty said: “Darryl was an excellent companion. Full of mirth and merriment. He confirmed one thing to me that I had thought was true of him – he loves food. Helloooooo! Burgers, fries, ice cream, chips and lollies, nothing was barred. We bonded over the four days and have an unbreakable friendship that will last forever. Our conversation covered a lot of topics – punting, women, punting, food and punting.

“There was only one ‘incident’ between us. At 2am one morning Darryl needed to go to the tiny toilet but couldn’t fit through the door. He attempted to hit the porcelain from where he stood. It’s fair to say he came up a bit short. A bucket and mop were required that morning.

“The people we met along the way were fantastic and so kind to us. And it proved to the Big Marn and myself that Australia is the greatest country in the world.”

Erin said: “Beau was a wonderful travelling companion. So much fun and great company, but very easily distracted. He loves his phone and he kept thinking cows were sheep and horses were rams. He almost convinced me yetis were real. He handled difficult situations maturely, except the drama with Nate Myles’ bulldogs and our pet, Stuffy, which you’ll see on the show.

“Everyone we met welcomed us so warmly into their communities and homes. The home-cooked meals were to die for. I also loved meeting the next generation of rugby league players and the wonderful people who work so hard to make country rugby league successful. Also loved crossing the border into NSW and seeing a sign for where Greg Inglis was born.”

Beau said: “I really enjoyed the trip and couldn’t think of anyone at Channel Nine I’d rather do it with than Erin – not including Karl Stefanovic of course. We worked well together, and apart from not checking her blind spots she’s an excellent driver. She’s also very smart, but I can’t believe she didn’t know yetis weren’t real. I loved meeting all The Footy Show fans along the way, especially from the smaller country towns.”

Glenn Pallister, NRL Footy Show’s Senior Executive Producer, said: “This is easily the one of the biggest things The Footy Show has ever embarked on in 22 years. Logistically we have shot an entire reality show in four days. What shines through is the camaraderie that already existed between the hosts, and watching that go to another level as they lived side by side for four days and three nights – and we capture it warts and all.

“Among the highlights, apart from the hosts’ antics and the magnificent country characters they meet, are the many rugby league fans they encounter along the journey. Nearly everywhere you drive through there is a footy field with kids playing on it. How good is that?”