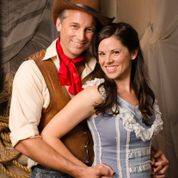 OH WHAT A BEAUTIFUL MORNING

Harvest Rain Theatre Company will present the classic Rodgers and Hammerstein musical OKLAHOMA! at QPAC for a strictly limited season from 18th April.  Tickets are on sale NOW from www.qpac.com.au

Complete with a 25-piece orchestra, breathtaking sets and costumes and an all-singing all-dancing cast tackling Rodgers and Hammerstein’s timeless score, OKLAHOMA! celebrates the vigor of the pioneering spirit with athletic dance and boot-stomping energy.   Filled with classic tunes like “Oh, What a Beautiful Mornin’,” “I Cain’t Say No” and “People will Say We’re in Love,” this enthralling new production will delight audiences young and old.

This anniversary production of the Rodgers and Hammerstein Classic Musical OKLAHOMA will celebrate 70 years since the musical was first produced on Broadway. “It was the musical that started them all,” says Director Tim O’Connor.

“It was the first Broadway musical where the songs followed the story, rather than the story being devised as a means of stringing a series of songs together.

“When it was first produced it was absolutely groundbreaking, and it paved the way for every musical that has been written since.

“It’s a remarkable piece of theatre and I’m so excited to be able to bring it to the QPAC stage for a whole new generation of theatre-goers to enjoy”.