ON CENTE STAGE :Bonnie & Clyde: Love on the Run

bonnie and clyde gangsters gold coast live theatre by Caroline Russo | on May 19, 2016 | 0 comments | in On Centre Stage | Like it 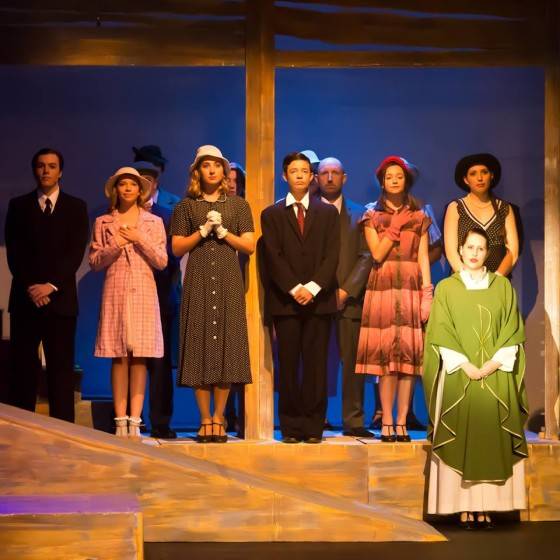 Bonnie & Clyde: Love on the Run.
By Douglas Kennedy.

The American musical Bonnie & Clyde, based on the story of the 1930s outlaws, known as Romeo and Juliet in a Get Away Car, is playing on the Gold Coast until June 4.

The Gold Coast’s Spotlight Theatre Company’s production has good production values, a large cast and a very live orchestra.
Wildhorn (he penned the musicals Jekyll & Hyde and Dracula, as well as the Whitney Houston hit Where Do Broken Hearts Go) received a formidable international reception with this retelling of the bullet-riddled lovers’ story.

The show opened in California and has been seen in Germany, Korea, the UK, Ireland, and North America as well as winning several awards and two nomination for 2012 Tony Awards. 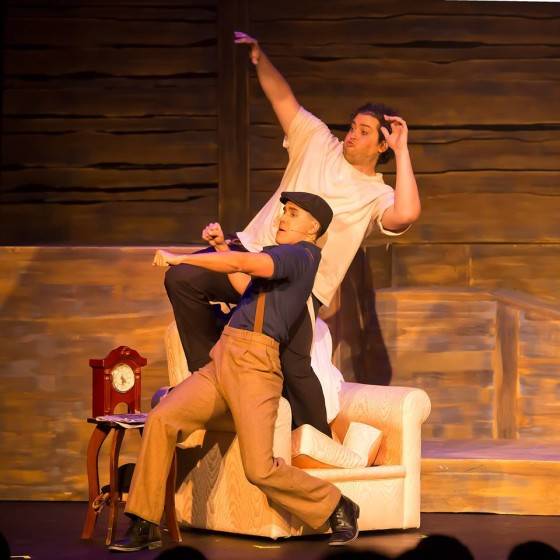 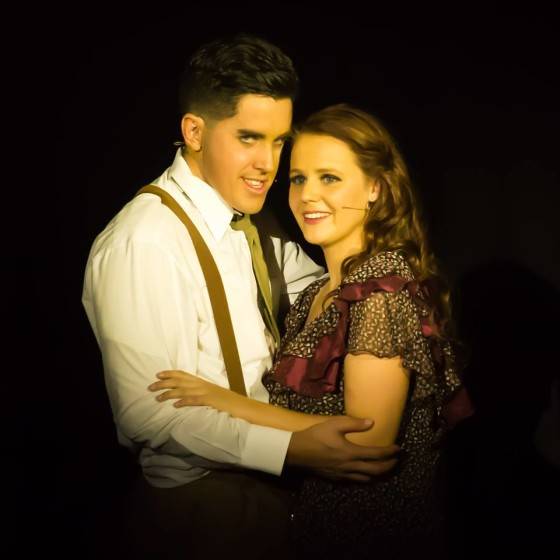 However, to balance the books, the Broadway production only lasted four weeks due to poor notices, despite good audience reaction in the previews.
This version of the B& C story is a fascinating insight into the relationship between fact and fiction in American gangster mythology and the cancerous relationship between fans and celebrities, when adulation spins out of control.
The modern perception of Bonnie & Clyde is based largely on the 1967 Arthur Penn movie (of the same name) featuring Warren Beatty and Faye Dunaway as the two gun-toting road runners cutting a criminal swath across the US.
This highly entertaining and romantic image of the two dishy starry-eyed bank robbing lovers, charming the pants of everyone before going down in a body-shaking slowmo hail of bullets, is one of cinema’s most enduring images.
The hail of bullets analogy hits the nail on the head as the car (a Ford V-8) and the couple copped somewhere in the region of 187 bullets in less than 20 seconds.
While the statistics on how many bullets were fired in how many seconds vary, we do know former Texas ranger, Captain Frank Hamer, and his buddies, gave them no quarter at that encounter outside Gibsland, Louisiana, on May 23, 1934.
The high bullet count and the bloody demise – Clyde was killed immediately and a screaming Bonnie was then executed – is one of the few aspects of the idolised version of the story that’s more or less true.
The real B&C – and this does come out in the musical’s words and music – were fantasists. A would-be musician (Clyde) and a besotted film fan (Bonnie) who fed on fame like starving dogs on a week old bone.
The lovers – and their devotees – appeared to have an unnatural idolatrous relationship, which continued after their death and even, to some extent, to this day. 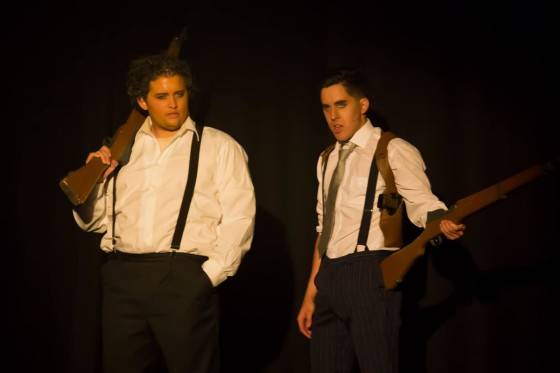 B& C (well Clyde actually) killed nine police officers and several civilians in a five year crime spree which focused on a few banks and many more small stores run by depression-hit small businesses.
The Depression Robin Hood allergy, adopted by some, hardly stands-up, although the romantic aura accredited to late 19th outlaws and early 20th gangsters, as well as the love interest, do contribute to the celebrity status.
Bonnie wrote poetry and Clyde played sax in the bath and, as seen in the musical, luxuriated in the platitudes and attention streamed from their fan base through the media.
When they died sightseers flocked to the scene to clip souvenir samples from Bonnie’s hair, and blood stained dress, while one man tried to cut off Clyde’s finger and another his ear.
The contents of their stolen car – which included film magazines, Clyde’s sax and guns and bullets, were taken by the troopers and later sold as souvenirs.
One of the troopers tried to keep the stolen car for himself but the owner – Mrs Ruth Warren – hired a lawyer, got it back, and eventually rented it to a travelling huckster for $100 a week.
Both reportedly made their own kind of killing.
Even today the community of Gibsland, Louisiana –where the couple had their last breakfast – boasts an ‘ambush museum’ and an annual B&C festival around May 23, which features look alike competitions and re-enactments.
The couple were buried separately with the epitaph on Bonnie’s grave stone predicting Gone but Not Forgotten.
The B&C celebrity bandwagons certainly does rolls on.