On Centre Stage：One Flew Over the Birdman Nest 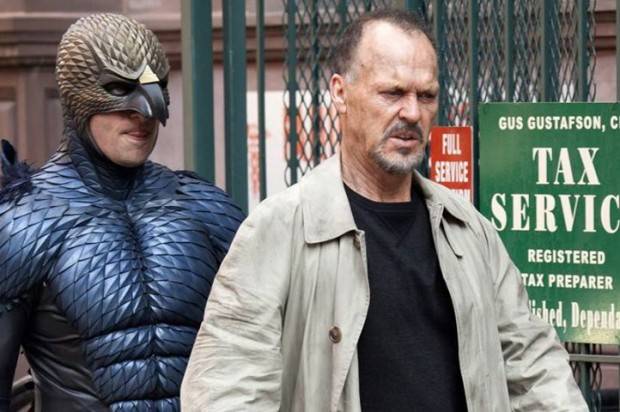 On Centre Stage
By Douglas Kennedy.

One Flew Over the Birdman Nest

‘Are you thinking of going to see the movie Birdman? Well, I accepted the critics’ recommendations but was very disappointed. I found it self-absorbed and going nowhere. It is far too long, the sound track is a mindless din, there are far too many scenes of the backs of actors walking down never ending corridors and staircases, and endless shouting scenes. There is also a lot of (sic) and throwing & wrecking things. There is a little bit of humour, but I have no idea why Michael Keaton is nominated for best actor as he is only required to be angry and shout a lot. I would only give it about 2 out of 5.’
A disillusioned movie fan on Facebook.

This anonymous movie goer was lucky because she only reached a relatively small group of friends and relatives who either thanked her, for warning them off Birdman, or didn’t bother to respond.
If she had a higher profile she might have coped the sort of playground banter newsman Piers Morgan and actor Alec Baldwin dished out to each other on twitter the other day.
The outspoken Morgan got the ball rolling with a scathing attack on the movie on Twitter calling it, ‘the worst movie I’ve seen all year,’ and branding the academy, ‘complete halfwits,’ for voting for the film.
That prompted Baldwin to respond with, ‘the acting in Birdman is the best this year,’ and citing the media celebrity as once again, ‘exposing ur (your) ignorance of what goes into a film.’
And so it went on.
When it comes to social media it doesn’t take long for the conversation to spiral down to a slanging match, while others shy away from expressing their views.
Morgan later said that Baldwin had told him in a private chat, ‘if you have a positive thing to say, you say it publicly, if you have a negative review you keep it to yourself.’
Of course, we don’t know if Baldwin actually said that, but we do know that these characters are almost professional media tarts and part of their job description is to be out there and over-the-top (OTT).
The fact is that Birdman – starring Michael Keaton, Edward Norton and Australia’s Naomi Watts – has garnered almost universal praise.
Critics – by and large – have been crazy about the film, giving it their maximum scores. Critics including Hush Hush Biz’s Peter Gray who marked it 5/5.
So should those of us standing on the sidelines, who possibly don’t think it’s the greatest thing since sliced bread, keep our own counsel?
After all the dissenters do have some representation – albeit in the minority – such as Nathan Reese, news editor at Complex, who wrote a scathing piece and had no problems peppering it with plot spoilers.
So what’s my take on the film which tells the story of a one-time superhero movie star – he played the Birdman of the title – trying to stage a serious Broadway play?
I agree that Birdman wouldn’t be everyone’s cup of claret – and there’s some I would actively discourage from going to see it – but I can’t endorse the assertion that it doesn’t have any redeeming features.
It’s a quirky movie with a rather disjointed clumsy narrative, but it’s also very funny at times (depending on your taste). I liked Michael Keaton’s performance and thought the drumming ‘din’ enhanced the chaos. I also liked the tracking style of the film.
I liked the feel it had for Broadway theatre and the exploration of the totally self-absorbed, self-indulgent theatrical characters. I don’t believe all theatre types are like that – certainly not more than 92 percent (joking) – but it is a creative factor to take into account. Lots of people live in their own strange little world (more than you might think) and these characters are buried more deeply in their own imaginations than most.
The result is that – possibly apart from a recovering addict (Birdman’s daughter) – most are sort-of entertaining but basically unattractive. When going to the movies I think it is a good idea to dig deeper than the critical superlatives and ask yourself do I really want to see this film?
In a cultural democracy not everything is for everyone but everyone has the right to their own opinion and the opportunity to enjoy – or otherwise – whatever they like. When I write reviews, I never assume that everyone is designed with me in mind.
Since I wrote that, I have read other interpretations of the chaotic narrative which suggest that Keaton’s character might well be schizophrenic and that would explain a lot. In fact it puts a completely different complexion on the film.
If it’s true I don’t think it’s a plot spoiler because the knowledge definitely helps to enhance our understanding of the movie.
As for the bigger question, concerning the individual’s right to dissent, I would advocate that we all have a right to express ourselves without looking down the gun of ridicule and humiliation.
Say what you like in social media, but play the ball rather than the man or woman and we can have a debate without disgust.
One of the saddest conversations I ever had with someone in a theatre foyer, a young assistant, who said she never really cared for Cats, but she didn’t want that to be generally known?
Why not?
There’s a lot of talk about pride nowadays so people should take pride in their own convictions while at the same time respecting others.
It is called good manners and, while it might sound trite, it does make the world a better place.