bottoms up Douglas Kennedy farting funnies old tales by Caroline Russo | on April 20, 2013 | 0 comments | in On Centre Stage | Like it

On Centre Stage with Douglas Kennedy 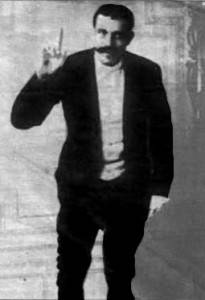 I’ve seen it on the internet, both in the public domain and personally, where people masked in anonymity feel free to talk in vulgarities as it pleases them.

Of course, they would never speak to their wives, girlfriends, and children like that, but someone they don’t know on the internet is fair game.

That turned my attention to a really talented farter Le Petomane (Joseph Pujol) who was born in Marseville in 1857.

It appears a swimming accident as a young man gave him some great farting gift, which allowed him to set off wind at will and even make it musical.

A lot has been written – and I’ll give you a link at the end – about the technical reasons for his success.And I am talking about success; Le Petomene was earning around 20,000 francs a show at the height of his career and playing to the European elite.

What interests me, however, is that at the end of the Great War (1918) he gave it all away to run a small bakery and live a modest life. He said the ‘inhumanity’ of the war had influence him. He died aged 88 in 1945.

He put his backside into mouth balls or maybe mothballs in his backside. I wish some on the cyber message base would show that kind of common sense.