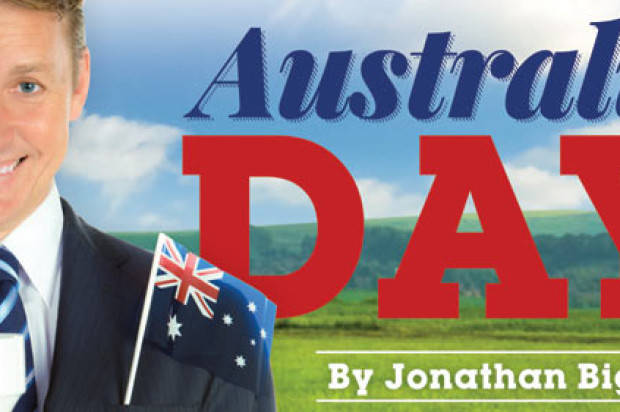 On Centre Stage.
Storms in Our Tea Cup.
By Douglas Kennedy.

Australia Day by Jonathan Biggins. Queensland Theatre Company. Features Paul Bishop, Chris Betts, Louise Brehmer, Barbara Lowing, Lap Phan, Bryan Probets. Directed by Andrea Moor. Playhouse Theatre. Continues until February 16.
There seems to be two ways of looking at the debate over ‘that’ comic line in Jonathan Biggins’ satirical celebration of Australia’s national day.
We can either dismiss it as simple a ‘storm in a tea cup’, as was put to On Centre Stage over the weekend, or see as yet another bid to aid and abet south-of-the-border cynics who revel in dismissing us as hicks.
It seems to OCS that we’re spending an awful lot of time demonstrating that we’re a sophisticated grown-up world class city, but when push comes to shove we’re like little nervy creatures caught in the bright lights of our betters.
Australia Day is an excellent satirical entertainment – albeit more skittish than dramatic – but since Friday night’s opening all the discussion has been about a benign self-censored joke at the expense of Premier Campbell Newman.
For those who spent the weekend abroad – or maybe on another planet – the line was one of several referencing high profile politicians, including Christine Milne and John Howard.
It involved one character asking, ‘why don’t you merge the Conservatives like they did in Queensland,’ (as in the LNP to defeat Labor and the Greens) and another quipping, ‘I can tell you in two words – Campbell Newman.’
The story in early reports suggested that someone, allegedly linked to the Liberal National Party (LNP), heard it at a preview, and protested, and that resulted in it being cut.
Playwright Biggins is reported to have described it as a ‘dangerous precedent’ and there’s been rumour and counter rumour about who did what.
For the record, the Queensland Theatre Company said it was a management decision as part of the natural creative process – after all who in Queensland would want to hurt Can Do’s feelings – and the QTC’s board deny any interference.
It certainly will all blow over, but in the meantime OCS thought it a good opportunity to take a close look at Queensland’s famous storms in our popular performance teacup.
When I talk about our censorious past on my Brisbane Greeter walks, I generally start around the mid-1950s with the then fears for our first teenagers following the rock ‘n’ roll boom.
However, it is worth noting that Brisbane’s first theatrical entrepreneur – a Mr George Croft – originally self-censored himself by skipping the colony.
He decided to shoot through after presenting, an acrobatic song and dance show, which historians have described as, ‘of rather questionable taste ‘and, probably more importantly, ‘a financial flop.’
That dubious premiere took place at a venue known as the Amphitheatre in Russell Street, South Brisbane, around 1847.
My little bundle of yarns starts at City Hall where I remind folk – or let them know – that the late great Johnny O’Keefe was only allowed to play his first gig there in the mid-50s on the understanding that he billed himself as The Gentleman of Jazz.
JO’K was so furious about cutting his, ‘Wild One’ moniker that he dubbed Brisbane, ‘the squarest city in Australia’. 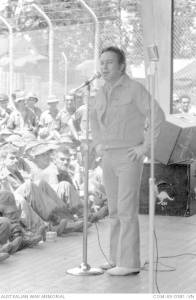 Oh that hurt but – as it was a storm in a tea cup – he returned with his seemingly more dangerous tag intact the following year.
The next hiccup was more a storm in a D cup during the 1960s, when the Guinean dance company, Les Ballets Africains, came to Brisbane with a program of traditional dance.
They were told in no uncertain terms that women – even African women in traditional costume – could not dance here bare breasted.
That just didn’t happen in Brisbane!
Or did it?
Back in the 1950s George Wallace junior’s shows girls – known as the Nudie Cuties – at the Theatre Royal would give the audience a still flash at the end of the show, and it was deemed good, clean, fun.
The chief Cutie, Carmelita, was on all accounts a real showstopper.
The African dancers, however, wore white bras and everyone had a bit of a giggle.
The next storm in a tea cup came in the form of a naughty word around the end of the 1960s, when the Twelfth Night Theatre presented Alex Buzo’s controversial one-act play, Norm and Ahmed.
When the detectives came on Friday night they didn’t have a problem with red neck Norm calling the Pakistani student Ahmed a Bong and then decking him in the play’s conclusion, but they thought the use of the F. word was going just a bit too far.
They warned management to cut the line – which they refused – and returned the next night and arrested the whole cast.
The show, about prejudice and racial tolerance at the time, was a two-hander, but the prosecution came to naught because it needed someone to complain and no one bothered.
The OCS’s last little storm was whipped up a couple of years ago when the QTC removed a poster for Romeo and Juliet after someone complained that the girl playing Juliet – then 27-year-old Melanie Zanetti – looked far too young on the poster in an obviously intimate embrace with Romeo (Tom Larkin).
It appears that one compliant went to the Advertising Standards Board protesting the promotion of underage sex and the QTC withdrew the poster from mainstream circulation.
The storm in a tea cup, however, did generate a fair amount of publicity and social media chatter (just like the Australia Day issue today).
While the QTC happily removed the poster it remained on the side of the Bille Brown Studio for the rest of the season (where I pointed it out to BG guests on our tours and told them the yarn).
(Note: According to her Capulet dad Juliet is not yet 14 in R&J, but then the age of constant then was much lower than is acceptable today. Henry VII, for instance, was born January 28, 1457, to 13-year-old Margaret Beaufort. It was, understandably, an extremely different and dangerous birth and Margret never had another child).
So the great Brisbane performance tradition of storms in the little tea cup continues unabated into the 21st century.
I sense they will continue to come and go, but I guess at least they are our storms in our tea cups. The irony of all is that I wonder if Can Do really gives a hoot.
They say that in public life it doesn’t matter if they love or hate you as long as they don’t ignore you. And really isn’t a comic or witty dig from time to time all part and parcel of life in a health democracy?
In the meantime catch Australia Day – it’s a lot of fun even without the Can Do quip.

On Centre Stage.
A Fine Australia Day.
By Douglas Kennedy.

I guess having had a bit of fun with my Storm in a Tea Cup story, it is only fair that I write a few lines about the play Australia Day.
The playwright Jonathan Biggins is probably best known for the politically driven Wharf Revues, which sadly I have never seen. However, I have seen Biggins on stage in cabaret and TV – and always enjoyed his work – along with regular partners such as pianist and funny man Phil Scott.
While Australia Day is a jolly rump that bounces along with plenty of wit and intelligence, I think it works better as an entertainment than a dramatic piece.
The various political debates – most of the best of in the first half – really made Australia Day shine, while the more dramatic storyline seems forced.
The show really cuts through the usual political hype and creates some great exchanges of dialogues, while the story line about children with disabilities didn’t work as well.
I also thought the structure in the second half was a little awkward as the action was set in the main tent so the characters had to keep rushing on to explain the farcical mayhem taking place off stage.
I believes farce works best when the audience can see it unfolding, get caught up in the tension, and identify with the character’s comic suffering. In the circumstances, something was lost in translation.
One of the show’s real pluses were the characters and the character development with everyone spot on. There was Mayor Brian (Paul Bishop) angling for preselection for a federal spot with the liberals, the grump old redneck Wally (Chris Betts) and the tree hugging Greens representative, Helen (Louise Brehmer), among others.
The cast was rounded out by natural 2IC Robert (Bryan Probets), the CWA woman Marie (Barbara Lowing) and the school ring-in and token Vietnamese Born Australian (VBA) Chester (Lap Phan) all trying to work together to create a memorable Australia Day.
The cast had some great lines and really shone throughout.
Despite my reservations about some aspects of the show, Australia Day is overall an entertaining and intelligent start to the QTC’s 2014 season.