acting horses Cavalia Douglas Kennedy Horses performance horses by Caroline Russo | on March 21, 2013 | 0 comments | in On Centre Stage | Like it 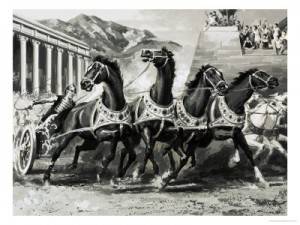 ON CENTRE STAGE  with Douglas Kennedy.

The Brisbane premiere of the spectacular Cavalia, featured in the previous OCS posting We’ll be Riding with the Horses Yea,Yea, has stimulated interest in show business connections to the equine world.

Most  know horses as part of the sporting world as well as movies, TV, novels, circuses and the visual arts rather than on-stage.

However, for a few short years in the late 18th century, and early 19th century, horses had their own stage shows and some achieved star status.

They were the ‘matinee idols’ of a singular mix of melodrama, horsemanship and circus known as hippodrama.

Hippodrama – a combination of the Greek word hippos for horse and drama – had its origins in a London theatre entrepreneur’s original idea to circumnavigate tiresome licensing laws.

The licensing act of 1737 only allowed three London theatres to    present drama, Covent Garden, Drury Lane and the summer  theatre at the Haymarket.

This frustrated theatre owner Philip Astley, whose Ampitheatre and Royal Circus, was only licensed to stage  ‘public dancing and music and horses.’

Astley decided that if he recruited his horses as ‘actors’ and have them  play  ‘ horse characters’ he would be able to present dramatic stories.

The ploy worked and hippodrama was born.

The horses were written into the story and helped drive the narrative as well as inspire a new kind of stronger, larger stage in purpose- built theatres known as hippodromes.

There were two hippodromes built in Sydney and Melbourne in the 1850s.

The custom-penned plays had titles such as The Wild Horse of Tartary, Marlborough’s Heroic Deeds and Timour The Tartar.

However, the most dazzling use of horses in the theatre would come later – long after hippodrama had fallen from fashion –  when Ben- Hur  hit the New York stage.

When Lew Wallace wrote his best seller Ben-Hur:  A Tale of the Christ, in 1880, he was inundated with requests to adapt for the stage.

Wallace resisted for nearly two decades because of concerns about having an actor portray Christ, and the logistical complexities of staging the novel’s central action piece the chariot race.

Then playwright William Y. Young had the idea of  depicting Christ on stage as a beam of light and using the newly invented treadmill for the race.

The play opened on November 29, 1899,  with eight horses and two chariots featured.

The scene involved four giant cradles, which moved backwards and  forwards as the horses galloped towards the stunned audience on electric rubber rollers which spun the chariot wheels.

The animals were held back by invisible steel cables, but the illusion of speed and movement was created by a cyclorama backdrop as fans whipped up clouds of dust.

One critic described it as a ‘marvel of stage illusion’ and another said it was ‘memorable beyond all else.’

The show went for 6000  performances in the US and other   countries, including Australia,  before closing in 1921.

A contemporary one-off equestrian version of the Ben-Hur story, featuring 100 animals, including 32 horses, and 400 performers,  took place in London’s 02 arena on September 15, 2009.

Finally there’s Buffalo Bill’s contribution to circus and hippodarma, which has surely inspired some of Cavalia’s  most daring scenes.

His Rough Riders show opened with a parade of Turks, Gauchos, Arabs, Mongols and Georgians on horseback as well as stars such as Calamity Jane and Sitting Bull.

When Sitting Bull left the show Buffalo Bill gave him his favourite white trick horse and in 1890, when Sitting Bull was killed in a gun fight with police at Standing Rock Indian Reservation, the horse, thinking it was show time, began to dance, prance and rear up as the old man lay dying.

The role of horses on stage and in the theatre of life has a significant role in performance and is now being re-invented for a new age.