acting on stage jasper Jasper jones theatre Queensland Theatre reveiws for brisbane arts by Caroline Russo | on August 10, 2018 | 0 comments | in On Centre Stage | Like it 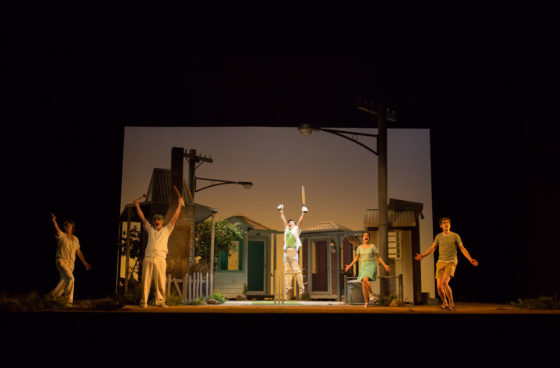 The half-cast rebel, with a touch of Huck Finn, Jasper Jones, is hardly the star of his own eponymous story, but rather the elephant in the room in 14-year-old bookish nerd Charlie Bucktin’s coming-of-age memoir.

In Kate Mulvany’s stage adaptation of Craig Silvey’s instant class, recently directed for the screen by Rachel Perkins, the audiences focuses on Charlie’s world, which has Jasper at its epicenter.

In short we see a lot of Charlie (played to awkward perfection by Nicholas Denton), while hearing a lot about Jasper (Shaka Cook), whose legend hangs over the action like a gathering storm.

The result is oodles of hilarious bubbling teenage angst – thanks’ Nicholas – with streaks of almost melodramatic whodunit as Jasper weaves in and out of the action.

There’s plenty of literary ghosts in the play as Charlie’s story – set in the mythical Australian country town of Corrigan in the mid-sixties – draws on works from J. D. Salinger’s Catcher in the Rye to Kill a Mockingbird by Harper Lee.

The claustrophobic world of small town life in the American south, and Charlie’s Christmas seasonal boredom, could easily be in a parallel universe, but ultimately Corrigan with its emphasis on summer preoccupations such as cricket is purely homegrown.

The story opens on designer Anna Cordingley’s beautifully realised set as Jasper – who is known to but has never spoken to Charlie – whisks the lad away to a whodunit type of adventure.

Jasper takes Charlie to his hide-away by the dam where it looks as if someone has violently attacked town sweetheart Eliza Wishart (Melanie Zanetti plays Eliza and her sister Laura) and left her hanging for Jasper to get the blame.

Jasper – and very quickly Charlie – believe the culprit is Mad Jack Lionel (Hayden Spencer), but it’s clear that Jasper is going to cop it sour and this time it’s more than just tomfoolery.

Much of the play’s first half leaves Eliza’s melodramatic story on the backburner as we focus on Charlie’s smalltime problems, such as dealing with cricketing bully Warwick Trent (Ian Bliss), expressing his feelings for Laura and dodging his bridge-obsessed mum (Rachel Gordon) and reclusive school teacher dad (Ian Bliss doubling up in roles).

His only constant friend is cricket mad Vietnamese refugee Jeffrey Lu (Hoa Xuande) while, apart from a couple of cops in the background, all the other key characters remain off-stage.

The action returns to the Kill a Mockingbird type narrative in the second half as the action eclipses the juvenile humor and the story moves to its sensational end complete with twists and turns.
Jasper Jones, with its haunting whodunit wrapped in nostalgic and funny small town humor from another era, represents a terrific visit to the theatre.

This will surely be one of the Queensland Theatre’s most memorable productions of the year.