On Centre Stage : Let’s Do the Time Warp Again

Fish nets Richard O’Brien Rock Horror transvestite by Caroline Russo | on January 13, 2014 | 0 comments | in On Centre Stage | Like it 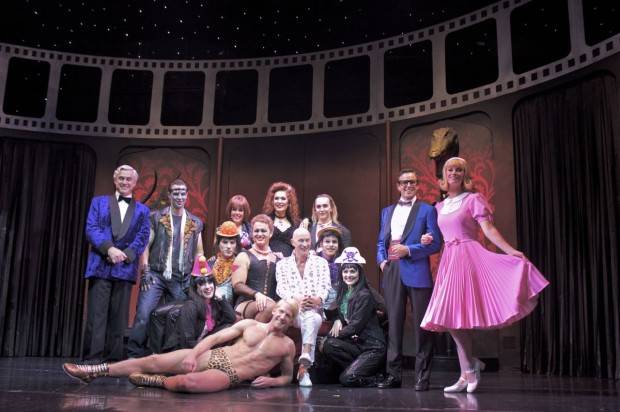 Let’s Do the Time Warp Again

There’s something about The Rocky Horror Picture Show which gives audiences a sense of ownership, unlike any other musical show.

The mood was there at Brisbane’s Lyric Theatre on opening night, when the audience took to its feet as one, and applauded like adoring parents cheering their own.

This was no ordinary standing ovation, but rather the special connection between two thousands devoted souls and their baby.

OCS didn’t particularly think this was the best Rocky seen on the Brisbane stage – although Craig McLachlan at 47 grabbed the nettle and gave us a loveable Frank ‘n’ Furter – but that didn’t matter because the essential elements were intact.

In addition to the Sweet Transvestite, we had a passable Brad and Janet, a toe tapping four piece band and an assortment of eccentric ‘B’ movie characters, singing familiar songs that many of us have lived with for 40 years. Indeed, this was as much about the Time Warp as anything else and I am sure that, along with the 1975 movie, helped heighten our sense of kinship.

Richard O’Brien was an out-of-work English born and New Zealand raised actor and singer-songwriter living in London when he penned Rocky. 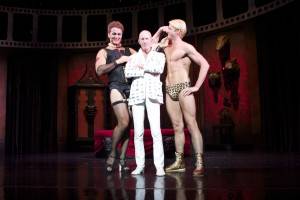 His biggest claim to fame was working as a stunt rider on Carry on Cowboy before he had the opportunity to join the cast of Jesus Christ Superstar.

O’Brien was the understudy to Herod and wanted to play the comic cameo as Elvis, while director Jim Sharman was hoping he could tap dance his way through the part.

The actor managed to play Herod once before he left the show and dedicated himself to writing a spoof on the sci-fi flicks he had adored as a youngster growing up in New Zealand.

He must have left the door partially open because Sharman was intrigued with The Rocky Horror Show concept and along with the first Frank `n’ Furter, Tim Curry, was there at the beginning.

The beginning – and the end – was supposed to be a three week stint at London’s Royal Court’s Theatre Upstairs, but the production was too hot to drop and played at various theatres for 2960 performances, finally ending its first run in 1980.

In the meantime Rocky had its first outing in New York – where the critics panned it and it closed after 45 performances – and in Australia in 1973 with Reg Livermore in the fishnet stockings.

OSC’s introduction to Rocky came in the 1980s when Wilton Morley – Robert Morley’s youngest – decided to stage an Australian revival first in 1981 with Daniel Abineri and then a 10th anniversary tour in 1984 with Livermore back in the saddle.

Yours truly caught up with the Rocky Horror circus in 1987, when it toured New Zealand and Australia with Abineri and also O‘Brien in tow to promote the production.

O’Brien had played Riff Raff in the 1975 film – a cult favourite and the longest running movies of all time – and even The Narrator in several stage shows.

This time, however, O’Brien was simply along for the ride when I caught up with him at Sydney’s famous celebrity hotel The Sebel.

The diminutive and extremely skinny – O’Brien doesn’t seem to changed much now he’s 71 – showman was charm on a stick spelling out how Rocky had given him entre to a who’s who of rock royalty.

“It means I can ring an Elton John or a Pete Townshend and they will listen,” says O’Brien.

Later I bumped into O’Brien in the Sebel cocktail bar having a drink with what was then one of the world’s leading heavy metal bands and we all had a drink together.

My son was mortified.

“Why would – and I really can’t remember the name of the band – want to drink with you?” he exclaimed.

“Because they are nice friendly heavy metalists,” I replied.

Then O’Brien and the band left to continue the party upstairs and I – a journalist – was decidedly not invited.

Anyway I doubt I would have been into their party treats.

There’s a final story from the tour when I discovered that the former New Zealand PM Robert – Piggy – Muldoon had a small stint in the Narrator’s role at Auckland’s Her Majesty’s Theatre.

In those days I had an arts column in a regional daily newspaper and so I called Morley and asked how he would feel about our premiere Joh Bjelke-Petersen doing the Narrator?

Morley was all for it and said – like Muldoon – he would donate part of the profits to any charity Bjelke-Petersen cared to nominate.

I called the premier’s office and was told where to go – it certainly was not Transylvania – which is exactly what I suspected, but I had the last giggle.

I wrote a small piece telling the story and explaining that Joh wouldn’t be satisfied with the supporting Narrator’s role. He’d want the starring role.

We ran a picture of Frank `n’ Furter with Joh’s head atop and never heard from either his department or the producers again.

(The only person who called was the publicist who asked where I had got the idea from. I guess she didn’t think of journos having imaginations)

Oh, and incidentally, a 24-year-old Russell Crow was in that production, which played the Lyric Theatre towards the end of the year and in early 1988.

He got to be Eddy and Dr Scott – playing the wheel bound teacher in dark glasses like a later day Dr Strangelove – and it’s there on You Tube for all to see.

Let’s do the Time Warp Again!