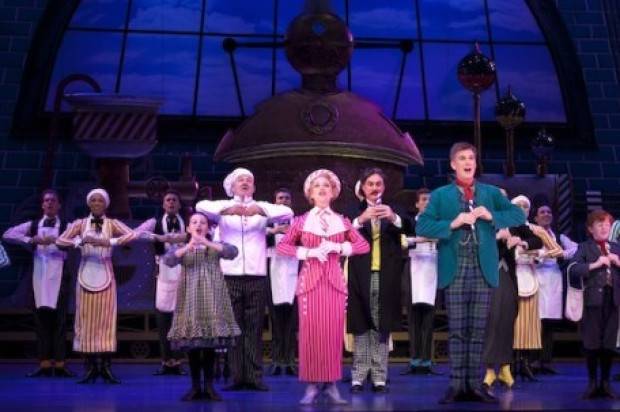 Prop power has come to Brisbane with two shows starring larger than real-life creations from the magical world of theatrical spectacle.

Chitty Chitty Bang Bang the Musical features a stage car with a place in the Guinness Book of Records, while Little Shop of Horrors boasts multiple-sized pot plants morphing from a blood sucker into a flesh eater.

On Centre Stage (OCS) was at the opening of both productions, and discovered the shows had background stories as fascinating as their memerising artifacts.

So let’s take a park at Brisbane’s Queensland Performing Arts Centre and pop into the Lyric Theatre for a peak at the wonder vehicle Guinness reckons is British theatre’s most expensive property. Chitty Chitty Bang Bang comes with four background stories, which have taken the super car from the heady trackside world of the jazzy 1920s to the high-tech stage of the early 21st century.

The original Chitty was the creation of the eccentric Polish aristocrat, count and once world famous amateur racing car driver, Louis Zborowski, who built monster cars in the 1920s.

Zborowski, along with engineer Captain Clive Gallop, built four aero-driven motors to race in Europe and America and called three of them Chitty Bang Bang. In the family musical audiences are reliable informed that the name Chitty is derived from the noise the car makes, but the moniker actually comes from a bawdy First World War soldier’s song.

It’s a reference to the officer’s custom of securing a weekend pass, which cleared them for a trip to Paris and a night of illicit pleasure in the local knockin’ shops.

Chitty 1, which boasted a 23 litre six-cylinder Maybach Gotha Bomber engine squeezed into a Mercedes chassis, made its debut at England’s Brooklands race track in 1921, and earned the reputation of a, ‘brutal car put together by a madman.’

The Chitty Chitty Bang Bang producers reckon the fun-loving Zborowski, who liked to dress up and don checkered golfing caps, could well have inspired writer Ian Fleming’s 1964 children’s story of the same name.

They reckon Fleming’s human hero, Caractacus Potts (David Hobson), is a chip of the old block and the show does start with the inventor rescuing the once proud Grand prix champ from the scrap heap.

Fleming, who is best known for the James Bond books which morphed into one of the world’s most famous movie franchises, wrote his yarn about a flying racing car for son Caspar.

Sadly, Fleming died of a massive heart attack on the boy’s 12th birthday only months before the book was to be published.

The story is packed with Flemings trademark passions for incredible mechanical objects, spies and, of course, cars, although Chitty Chitty and the other props in the show are comically Edwardian.

The next big installment in the Chitty Chitty saga came when Bond film producer, Albert R ‘Cubby’ Broccoli, brought the story to the big screen.

There were hopes that the movie would be natural follow-up to the 1964 smash hit children’s fantasy, Mary Poppins, which brought together Dick Van Dyke and Julie Andrews as well as an Oscar winning score from the Sherman brothers, Richard M. and Robert B.

The composers, and Van Dyke, were recruited for the Chitty movie, but Andrews declined citing it’s similarity to Poppins.

This is a land of spies and toymakers – making toys for the baron – while the evil Child Catcher (Tyler Coppin) catches the kids and turns them into sausage meat.

The final installment in this layered narrative came in 2002, when the producers decided theatreland had the technology to create a flying prop, which could carry the actors into the air.

The result was a $1.2 million Chitty, which has captivated audiences since its premiere at the 2286-seat London Palladium in 2002.

The new Chitty, which is as shiny as any slick contemporary racing car, boasts the soul of a saint and the spirit of an adventurer as ‘she’ sores emotionally above her human co-stars.

The show, mostly drawn from the film and featuring six new Sherman songs, opened April 16, 2002, and ran for three and a half years taking more than $70 million and moving to Broadway in 2005.

Chitty had its Australian premiere in Sydney in 2012 and is how winning over Brisbane audiences with a mix of family fun, chocolate box sets, simple slapstick humor, a great orchestra and breathtaking effects.

Oh What an Appetite! However, the story of Audrey II, who grows from a blood-sucking pest into a fully-grown person-eating psychopath, does have a cinematic and theatrical pedigree and a scene stealing prop.

Naming her after his adored Audrey – although the voice of the plant is provided by Josh Daveta – Seymour begins to feed her with drops of his own blood.

But as Audrey grows, the carnivorous creature’s greed is stimulated and demands for something more substantial become more insistent. The plant earns Seymour fame, the affections of the human Audrey (Lauren Ware), and plenty of chances to sing (the show boasts a first-class eight piece band), success has its downside.

The show is peppered with stock characters from a three-piece girl singing group – Alex Feifers, Aurelie Roque and Bronte Devine – to a kinky dentist (Kieran Davey) who is in for the high jump.

The Little Shop story was first brought to the big screen by king of the B-movies, Roger Corman, who is 1960 shot the film in two days and one night at a cost of $30,000.

The story – which was thought to be inspired by John Collier’s 1932 yarn about a man-eating plant – was filmed using sets feature in another low grade movie Bucket of Blood.

The musical, which ran for more than 2000 performances, is the third highest grossing off-Broadway musical of all time. In 1986, director Frank Oz (from the Jim Henson stable and creator of characters such as Fozzie bear, Miss Piggy and the Cookie Monster) turned the musical into a movie featuring among others Steve Martin and Rick Moranis.

Now, The Little Shop of Horrors is back at BAT and looking good with a top shelf musical ensemble and an Audrey II worthy of the name star (thanks in part to puppeteer Tom Yaxley).

However, I doubt whether many of her fans would want to bed her even in their back gardens!