On Centre Stage On Spanking and Barking

On Centre Stage :with Douglas Kennedy. 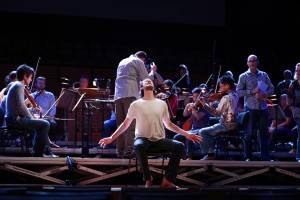 On Spanking and Barking

OCS can reveal that it’s been a spanking good week for Bach, while Spank’s bark is funnier than its bite despite all the exotic promise.

Let’s start with the saucy stuff as Spank,  the American parody on the titanic best seller Fifty Shades of Grey, had its Australian premiere in Brisbane last week at Gail Wiltshire’s unsinkable Brisbane theatre.

It’s not really OCS’s bag but Sunday’s almost capacity crowd was having a ball as comedian Rebecca De Unamuno as the author tried to create characters wading into the shallow end of the sex pool.

The guy, played by Stephen Mahy of Jersey Boys fame, was fairly compliant, but the girl, Caitlin Berry, kept demanding something deeper.

OCS reckons the Twelfth Night is looking for another Menopause the Musical in Spank as that show broke box office records, running for nine months (the time it takes to have a babe) back in the mid-1990s.

(For the record the previous record holder was My Fair Lady at the beginning of the 1960s).

There’s no season end in sight for the show, but you’ll have to be quick if you want to catch Bach St Matthew Passion at the Queensland Performing Art Centre’s Concert Hall.

Opera Queensland’s artistic director, Lindy Hume, has reprised the success she had with this spiritual masterpiece at the 2005 Perth International Arts Festival for three performances only.

The Oratorio finishes on Saturday (March 23)

This spiritual Easter offering – it was first performed in 1727 and draws on the Gospel of St Matthew (Chapters 26 and 27) – takes us through the seasonal re-telling of Christ’s story from the Passover to the Resurrection.

There are nearly 60 musicians and singers on stage – in casual wear such as jeans and T shirt – to re-create this masterpiece.

The Opera Queensland Chamber Ensemble and the feature voices as well as the chorus were captivating on opening night in front of a full house which included OQ’s Patron Queensland Governor Penelope Wensley.

In one of the most eloquent speeches you’ll ever hear at an after party the Governor explained that the original 1727 production would have included an hour-long sermon.

The OQ production runs for more than three hours (with an interval).

That news encouraged almost everyone to grab another and raise a toast to progress.

Here are a couple of priceless observations taken from the program.

A quote from English poet W. H. Auden: ‘Christmas and Easter can be subjects for poetry, but Good Friday, like Auschwitz, cannot. The reality is so horrible.”

And finally a definition of Passion: From the Latin ‘passio’, passus (to suffer); traditionally used to describe the final hours of Jesus’ earthly life, from the Last Supper to the Crucifixion.