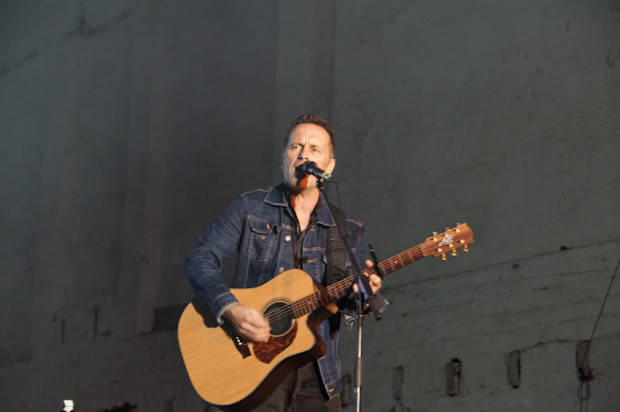 On Centre Stage
Renovation Roulette Gets Musical Airing with Douglas Kennedy
If you’re a soldier there’s a chance- hopefully a slim one – that you could be killed in conflict.
If you’re a worker there’s a possibility – once again maybe slight – that an industrial accident might claim your life.
If you’re working at home pottering around with a few renovations, or maybe dabbling in some DIY, you should be perfectly safe?
Wrong!
Now there’s a silent, secret, killer on the domestic front stalking everybody with no regard for gender, age, religion or status or, indeed, any other feature which singles us out from the pack.
Asbestos is a shadow hanging over us all and, as with any other enemy, one of the natural safe guards is awareness.
This insidious killer needs to be put in the spot light so we all have a chance to tackle the threat, which is tipped to reach its peak somewhere around
2020.
We’ve seen what happens to factory workers such as the courageous social justice campaigner Bernie Banton who led a crusade on behalf of James
Hardie workers to gain compensation for their exposure to the deadly disease, right up to his untimely death in 2007.
We all saw Bernie on the TV, with his oxygen nearby, bravely battling asbestos pleural mesothelioma and Asbestos-Related Pleural Disease (ARPD) while creating an awareness for all those workers on the front line.
Maybe some of us know people – friends, family acquaintances – who have gone through the same terrible ordeal?
I can think of one family member and one wonderful work colleague who had to battle the disease and eventually succumbed before their time.
So awareness is one weapon on this ongoing campaign and there’s no better way of shining a spotlight on something as rotten as asbestos and, in effect spitting in the eye of the storm, than creating a rollicking good show fronted by a rock ’n’ roll veteran Mark Seymour (Hunters and Collectors) and featuring the 50 –strong Brisbane Combined Union Choir and Flipside Circus.

Dust comes to Brisbane’s Powerhouse on Friday (November 22), for four performances, with a swag of rave reviews and a promise that this multi-media theatre production will take its audience on an uplifting journey. It claims to do this by creating a meld, which brings together the sometimes harrowing stories of individual’s experiences with asbestos and a celebration of the sometimes larrikin spirit, which has become synonymous with the Australian character.

This is a rock’n’roll show, which has travelled the country gathering local stories and shining a light into the ordinary Australian home where asbestos can be found in everyday products such as toothpaste, play dough, high dryers and cigarette filters. The big story is that by the 1950s a quarter of all houses were clad with asbestos cement sheets and it was also used by DIY men and women – and we are a nation of DIY lovers – to knock up anything from a share room or family room to a shed at the bottom of the garden.

Then there was the overalls – more often than not washed by the women – and the kids playing in the asbestos dust with innocent indifference.

However, the Dust team, which recruits community members wherever it goes, insists that the show is joyous one as it taps into the enduring Australian spirit which has learnt to confront its demons and fight its battles with an uplifting musical beat and sense of purpose, which takes the human condition to another level.

For more information check out………. https://www.facebook.com/Dust.Asbestos