ON CENTRE STAGE REVIEW OF BLACK IS THE NEW WHITE

black and while BLACK IS THE NEW WHITE BRISBANE THEATRE NOW COMEDY STAGE SHOWS by Caroline Russo | on February 4, 2018 | 0 comments | in On Centre Stage | Like it On Centre Stage.
Black is the New White.
Review by Douglas Kennedy.

On reflection there’s reminders of Guess Who’s Coming to Dinner and Meet the Frockers through to a myriad of table top Christmas domestics and a star-crossed Romeo and Juliet tale at its heart. The play may well be black and white in nature, but there’s also shades of grey as Lui takes an indigenous family out of the hell hole of familiar bleak scenarios and pitches them into a middle class setting worthy of David Williamson.
The indigenous Gibsons are anything but down on their material luck as dad and mum, ex-radical pollie Roy and long suffering wife Joan Gibson (Tony Briggs and Melodie Reynolds-Diarra) live in affluent retirement.

Vain but charming Roy, who sees himself as the indigenous Martin Luther King, spends his days in his holiday retreat engaging in the cut and trust of trivia debate on the virtues of various lettuce brands with long-time conservative political foe Dennison Smith (Geoff Morrell).

The Gibsons are preparing for Christmas with their two high achieving daughters lawyer Charlotte (Shari Sebbens) and fashion businesswoman Rose Jones (Miranda Tapsell) who is married to footy legend turn banker Sonny (Anthony Taufa).
In theory everything in the Gibson household should be rosy in the festive season with the promise of comfortable conversations, good food and fine wines.

But there’s a bombshell coming their way in the shape of younger daughter Charlotte’s new beau poor white boy Francis Smith (Tom Stokes) struggling to make a dollar composing advent-garde classical music.
The couple, who met in the UK, are happily frolicking in the family home when Narrator (Luke Carroll) introduces them and the time bomb starts ticking.

Apart from the racial divide, which is particularly challenging for older sister Rose, Francis’ father happens to be the despised Dennison Smith.
The manure – as they say – hits the proverbially fan when father, Dennison, and mum Marie (Vanessa Downing) turn up for dinner. 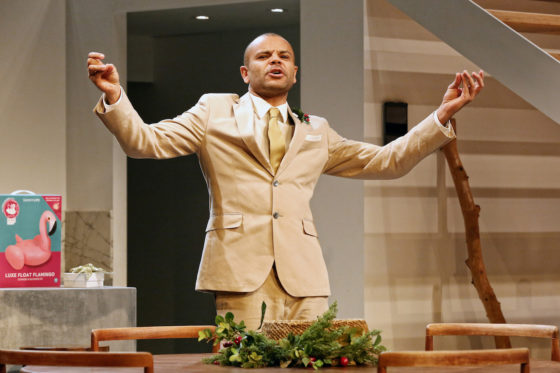 In the course of the visit – with help from the Narrator – we learn about the individual’s hopes, fears and frustrations as the warring family’s lives disintegrate in one of those classic theatrical holiday season dust ups.

While Charlotte and Francis struggle to establish themselves as a couple the mums and dads and in-laws allow their deepest emotions to bubble to the surface.
Roy and Dennison are totally self-absorbed in themselves, while Joan Gibson feels underappreciated, Marie under loved and Sonny decides he just wants to be a missionary (much to Rose’s chagrin).

There’s soul searching, verbal stoushes, dancing, and even a food fight as everyone attempts to make sense of it all under the watchful gaze of the Narrator.
There’s so many laughs there sometimes the next witty line gets lost in the previous one and some conversations so softly spoken away from the audience they get somewhat lost in the ether (or is it just the reviewer’s aged hearing showing?)

Generally speaking the performances are charming and engaging as are the characters in this rather fanciful world of satirical unreality.
Some of the conversations could have been pared back without losing too much of the play’s best moments and there’s an occasional air of the soap box.

However, overall Black is the New White is a thoroughly entertaining new work which had the first night audience on its feet and will undoubtedly win over audiences during its run.