On Centre Stage. The King and I will Never Whistle a Happy Tune in Thailand.

Douglas Kennedy QPAC Rodgers and Hammerstein the king and I by Caroline Russo | on April 25, 2014 | 0 comments | in On Centre Stage | Like it On Centre Stage.
The King and I will Never Whistle a Happy Tune in Thailand.
By Douglas Kennedy.

Rodgers and Hammerstein’s The King and I is back in Brisbane, in all its chocolate box glory, with Lisa McCune and Teddy Tahu Rhodes cutting a swath through a musical theatre hit list.
John Frost’s Tony award-winning production ticks all the boxes with sumptuous costumes, classic eye-catching sets, cute kids and frontline performances from McCune and Rhodes as Anna and the King of Siam.

The opening night crowd couldn’t help but rise to its collective feet after a night of classic Broadway peppered with unforgettable classics such as I Whistle A Happy Tune, Getting to Know You, Shall We Dance?, I Have Dreamed, Something Wonderful and Hello, Young Lovers.
The King and I is a perennial favourite in the Broadway loving State capital – who can forget Disney darling Hayley Mills (Pollyanna) in the role of Anna back in 1996 – but not everyone is as enamoured.
If you have caught The King and I, at QPAC’s Lyric Theatre, and you’re thinking of popping over to Thailand perhaps it would be as well not to mention the show.
It’s one of those `don’t mention the war’ situations as Thailand – the modern name for Siam – has never really come to terms with the way the west has depicted this little slice of its history.

Thanks to books penned by the original Anna – Anna Leonowens – in the 19th century, Margaret Landon’s 1944 novel, Anna and the King of Siam, and finally Rodgers and Hammerstein’s 1951 hit show the Thai nation has nothing but distain for western takes on the story.
Down the centuries they have revered their kings – say something negative about the royals in Thailand and you can end up in the slammer – and they reckon the various western accounts are full of, ‘historical and cultural distortions.’
It’s not just because the storyline implies that there was a repressed physical attraction between Anna and the King, but because of the way they perceive their much loved monarch to be belittled, lacking in sophistication and generally inferior to his Anglo betters.
The problem began with the original Anna’s accounts of life in the royal court, 1862 to 1867, which researchers and scholars have discovered were choc-a-bloc with errors.
The falsehoods start at the beginning of Anna’s story with her own biological lifelines
For instance, she claimed she was of Welsh origins and her father, an army captain, was killed on the northwest frontier and her husband was also an officer romantically dispatched in a tiger hunt
There were simple self-serving deceptions as Anna was born of mixed race in India in 1831, and her father was a cabinet maker who died even before she was born.
At the age of 18 she married a clerk named Leon Owners, not the Captain Leonowens conjured up in the stories and the musical.
Owens died ordinarily of apoplexy in Malaya after the birth of their two children, Louis and Avis.
Anna, who sent Avis to school in England, was recruited from Singapore to teach King Mongkut’s 82 children and 39 wives English (not as a governess) and it was what she wrote later, about the one-time Buddhist, that really kicked off the misconceptions.
It was said that her jottings started the round of, ‘wilfully maligning a great man’ who was known as a gentle and forward looking monarch, widely hailed as the national ‘father of technology and science’ in his country.
The academic, who unmasked the real Anna 60 years after her death, in 1915, was Dr W. S. Bristowe.
He revealed in his 1976 book that her stories about underground dungeons, where discredited wives were tortured, were not only false, but technically could not have happened in swampy Bangkok.
There’s also a story about a tryst between a monk and one of the king’s consorts, which Anna claimed resulted in them being tortured and burnt, that was said to be a fiction.
Bristowe reckoned Anna embellished her stories for the sake of a good read, and it’s on the record that Rodgers and Hammerstein adapted the supporting love affair for their own narrative purposes.
However, let’s be fair to Anna Leonowens.
She was born into a mixed-race family, and lived in a time when life was hard for a widow travelling the world, so it should come as no surprise that she strived to cover-up aspects of her story to protect herself and the children.
She lived in several countries, including Aden, Australia (WA), Singapore, America and Canada, and among her achievements was co-founder of the Nova Scotia College of Art and Design.
Despite the flaws in her story she was, by any standards, a remarkable woman.
She also had a good relationship with the king’s eldest son, Prince Chulalongkorn, who continued to correspond happily with her when he was king and she was living in Canada.
She claimed in her writings that she would talk to him about humanitarian themes and introduced him to the book Uncle Tom’s Cabin, which morphed into the Small House of Uncle Thomas in the King and I.
Slavery was still apart of Siamese life at that time, although historians maintain Siamese slaves were treated better than British servants, but King Chulalongkorn started the process, which saw it abolished at the beginning of the 20th century.
Louis eventually had his own Thai trading company and Anna’s great-nephew, her sister’s grandson William Pratt, would become Boris Karloff, who created Frankenstein’s Monster for the 1930s cinema. 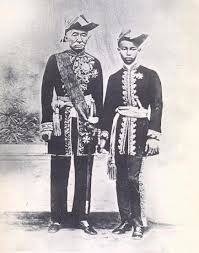 In 1948 two brother scholars, Seni and Kukrit Pramoj, wrote a more considered and balanced account of Mongkut’s reign, The King of Siam Speaks, and a copy was placed in the American Library of Congress in 1965.
However, King Mongkut, as far as the west is concerned, will always be someone akin to the brash and proud Yul Brynner character, who starred opposite Gertrude Lawrence in the stage production, and later Deborah Kerr in the 1956 Oscar- winning movie.
The Broadway version, which opened on March 29, 1951, ran for 1,246 performances and has been revised many times. It’s the fourth longest running show on Broadway.
The new production, which also features Marty Rhone as the King’s Prime Minister coming full circle having played the young lover 35 years ago in Brynner’s show in London, is faithful to the original.
As for the show itself, I rather like this description from Rodgers’ biographer, Meryle Secrest:
‘ The King and I is really a celebration of love in all its guises, from the love of Anna for her dead husband; the love of the King’s official wife, Lady Thiang, for a man she knows is flawed and also unfaithful; the desperation of forbidden love; and a love that is barely recognized and can never be acted upon.’
The King and I will be in Brisbane until June when it first moves to the Princess Theatre, Melbourne, and later to the Sydney Opera House’s Joan Sutherland Theatre.