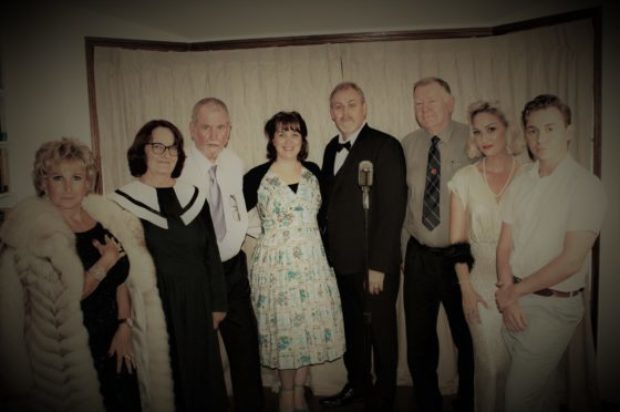 On Centre Stage.
By Douglas Kennedy

Gold Coast theatre director Nathan Schulz is making waves – radio waves that is – with a back to the future style show that celebrates one of our grandparent’s favourite entertainments.

Schulz, who is a familiar talent on the Coast’s community theatrical scene, is whisking audiences back to the golden age of radio drama with a series of six productions in the 2018 season.

The self-confessed Drama Merchant has created The Radioplay Hour, featuring classics which filled American homes in the 1930s, ’40 and ‘50s.

He describes the Radio Playhouse Hour as a ‘retro audio experience’ which aims to transport audiences to an age when radio was the heart of family life. The season kicks-off with the radio adaptation of the 1938 Daphne du Maurier classic Rebecca which was first broadcast in December 9, 1938, with Orson Welles and Ida Lupino taking the leads.

The Olivier, Anderson and Fontaine trio were the stars of the 1940 Alfred Hitchcock movie Rebecca– Hitchcock’s first in the US – which is the source of the radio script now used by Schulz.

Rebecca – which opens with the iconic line Last night I dreamt I went to Manderley again – tells the story of a young women who marries a mysterious charming man and finds she has to live in the shadow of his first wife Rebecca.

The man, Max de Winter, takes his bride to his luxurious Cornish mansion where she has to live with the constant reminder of Rebecca courtesy of the sinister Mrs Danvers.

The film, which won two Oscars including Best Picture, was adapted for radio with its stars as were many others of the best loved pictures of the era.

Schulz, who first began presenting this style of entertainment with the infamous radio broadcast of War of the Worlds and A Christmas Carol in 2016, says audience can savour the radio plays in two ways.

“They can sit in front of our radio, which is on stage in front of the players, imagining they are in their living rooms back in the 1930s or ‘40s or watch the director, performers and sound effects team buzzing around in the studio,” says Schulz.

“Basically it is an audio book performed live. The audience at the Burleigh Common room will be sitting in a cabaret setting with the option of supper from the Portuguese street grill van, Barraca, and/or BYO nibbles and drinks.”

Other radio plays planned for the season include Treasure Island (April), Phantom of the Opera (June), My Favourite Wife (August), Frankenstein and Dracula (October) and A Christmas Carol (December).

Rebecca will be performed at the Burleigh Common at 39 West Burleigh Road on Wednesday, Thursday and Saturday (February 14, 16 and 17) at 7.30pm. Dinner will be available from the Barraca food truck between 6.30pm and 7.30pm.
To book tickets go to www.thedramamerchant.com.au and click on The Radioplay Hour or go to what’s on at https://theburleighcommon.com.au/