On Centre Stage with Strassman– Schumousman: 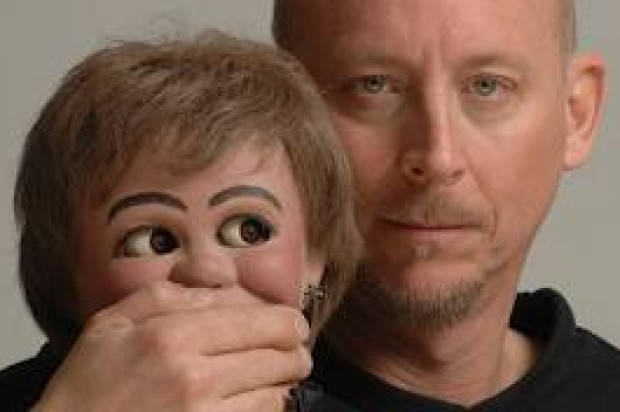 On Centre Stage.
Strassman – Schumousman: What Does it matter as Long as You Love Your Puppets
By Douglas Kennedy.

There’s lots of things to admire in David ‘Dave’ Strassman’s show Careful What You Wish For now playing the Twelfth Night Theatre.
There’s the artist’s use of robotics, which allows the ‘dolls’ to work independently of Strassman, the quips which raise the occasional chuckle and the characterisation of individuals such as the faul-mouthed Chuck Wood and innocent abroad Ted E Bear.
But what resonates with me is the genuine affection that Strassman has for the dolls, which must now be nudging the one dozen mark.
The show opens with a dinosaur and a clam doing a routine, continues with re-introductions to evergreens such as Chuck and Ted E. as well as Grandpa Fred and the poor man’s stand-up Sid Beaverman.

Some, of course, work better than others such as Chuck who is allowed to say anything and does it outlandishly.
We are not offended?
Why?
Because somehow, despite his foul mouth, Chuck is innocent and we know at the end of the day it is all Strassman’s fault.
The show has a so-so story line about Strassman wanting to retire – I wonder if that’s real life? – and being whizzed into another dimension.
It’s hardly worth talking about because the gimmick is in the robotics, but the heart is in the relationships.
I came away from the show believing that Mr. Strassman really does love his puppets, although he tries to throw us off by reminding us constantly that they are just puppets and he’s doing all the talking.
At the end of the day I had to ask myself: ‘Who’s kidding who?’
Strassman was the second of four children born in September, 1957, and has been coming to Australia and Brisbane since the mid-1990s.
His father Dr. Harvey D. Strassman was a psychiatrist and medical academic. His mother Marjorie Mae Bell. When he was a kid Strassman asked his father to purchase some professional magic tricks, which led to his interest in magic and ventriloquism.
This led to him performing for local children in his neighbourhood.
Dave started his education in Ventriloquism in junior high school where he undertook a ventriloquism class as an elective alternative, taught by local Chicago children’s television host Steve Hart.
Strassman studied acting at the American Academy of Dramatic Arts in New York. Instead of going on to the second year, he opted to be a street performer, performing in New York, London, and Paris. Unable to perform in French, Strassman got a job performing magic and mime at the now-closed L’aiglon nightclub in Pigalle.
He started performing in New York’s comedy clubs, with late-night spots at the Improv and Comic Strip. Throughout the ’80s, Strassman worked at comedy clubs throughout the United States, as an opening act, then middle act and headliner.
In 1986, Strassman placed robotics in Chuck, inspired by his remote-controlled airplane hobby, and originated in the early 1950s by New York ventriloquist Stanley Burns.
At the end of his act, Strassman would get into an argument with Chuck Wood and leave the stage. Chuck would then appear to come to life, using radio-controlled robotics with Strassman speaking into an off-stage microphone.
In 1991, Strassman performed at The Comedy Club, Melbourne, Australia as part of the Melbourne Comedy Festival.
At the end of the day – and who knows maybe this is notice that Strassman wants to retire – I believe the artist has a relationship with his puppets that goes beyond the curtain coming down at show’s end.
The season continues until Saturday (March 15) and it is worth catching.
(Thanks to Wikipedia for additional information)