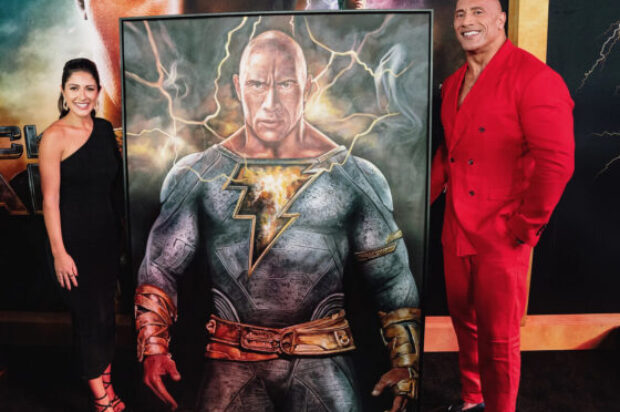 We spoke with the very lovely artist Danielle Weber who is based in Melbourne and runs her own studio and has recently returned from a whirlwind trip to New York. With our chat today Danielle tells us she was approached by Dwayne ‘The Rock’ Johnson (who she has known for 8 years) to paint an original piece which was unveiled at the global premiere in Times Square, NYC, of his HIT movie ‘Black Adam.’

It was at the beginning of 2022 Danielle says that I was approached by “The Rock” to paint a piece for his upcoming movie ‘Black Adam.’ Leading very busy lives, we both left this grand idea until the very last minute, however, we were determined to make it happen! DJ (Dwayne Johnson) had a very clear idea about what he envisioned for this piece, endeavouring to highlight the meaning of ‘Black Adam’ and capture the strong symbolism throughout the armour and film. We worked together on designing many powerful references, to ensure it represented DJ’s vision perfectly,” says Danielle.

‘The Rock’ decided it would be incredible for Danielle to present this special painting to him, at the New York, World Premiere, on the Black Carpet. With only a short timeframe available, Danielle knew she had to accomplish one of her most detailed paintings to date. Usually, a piece of this size and detail would take months to complete. Danielle painted this piece in just over 100 hours and completed it in 6 days. She then travelled over 50 hours, within 5 days, to make it to the NYC Premiere.

“There were thousands of people in Time Square that night and the energy on the Black Carpet was equally electric, inspiring and unforgettable. To witness DJ’s reaction, gratitude and excitement when seeing the piece for the first time, was truly an incredible experience and one, I will never forget. I really am honoured to have been trusted with this painting and helping to celebrate DJ’s biggest accomplishment to date.”

Danielle reflects that she’s a girl from Melbourne with a passion for Art and as Black Adam demonstrates, this powerful piece and special moment is a reminder that anything is possible. She wishes to inspire as many people as possible along the way. The ‘Black Adam’ painting will be displayed in Dwayne Johnson’s home.

Danielle will be having her first exhibition on 11th November and to get details go to her website
https://daniellesartwork.com