Alister graduated from the Australian National University in 1994 with degrees in Economics and Arts. He later attended the prestigious Australian Film and Television School (AFTRS) at North Ryde, graduating from their directing stream in 2004. At AFTRS he made a number of shorts, many of which have played at festivals around the world.

In 2005, his short film BOMB won several awards at the world’s biggest short film festival, Tropfest: Best Screenplay, Best Comedy and the People’s Choice Award for Best Film. Later in 2012, it was one of sixteen films from twenty years of Tropfest finalists chosen to screen in the ‘Best of the Best’ Tropfest competition in Las Vegas. He then co-wrote and directed the feature film Kokoda.

His next film, Sanctum, produced by James Cameron, was inspired by the near- death experience of co-producer, Andrew Wight, who had once been trapped in a terrifying cave collapse under the Nullarbor Plain. It was shot at Warner Roadshow Studios Queensland in 2010, utilizing the Cameron-Pace 3D fusion camera system and the largest underwater set ever built in Australia. Sanctum is currently the eighth highest grossing Australian film of all time with a world-wide box office gross of over $110 million.

The GCIFTN is proud to present Alister Grierson in what will surely be an insightful evening for all film network-goers.

Supporting guest of the night will be Writer and Producer, Mack Lindon, who will showcase the trailer for his recently completed film Rise of the Underdog, which is based on a true story. Our opening act entertainment for the evening will be Chick n Stu, who have combined Music/Performance experience of over 25 years in the industry and currently perform well-known cover songs as well as some of their originals to many loyal fans around Australia.

The GCIFTN is a great opportunity for film and TV industry folks to engage and network with their peers in a venue that helps promote film makers. Each network brings together some of the finest talent based in South East Queensland. As always, there are lucky door prizes to win. For bookings please contact Box Office at The Arts Centre GC on 07 5588 4000. 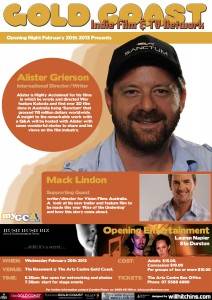