film festivals QLD the splendid film festival winton outback by Caroline Russo | on May 11, 2021 | 0 comments | in Film Festival | Like it Roll out the red carpet and get ready for stargazing as the 8th annual Vision Splendid Outback Film Festival returns to Winton, Australia’s Hollywood of the Outback this 25 June to 3 July 2021.

Spread across an unmissable nine-day program, festivalgoers will immerse in the unique outback experience, with screenings under the stars in Winton’s 103-year-old Royal Open Cinema, masterclasses, workshops and live entertainment.

Centred around the 2021 theme ‘Remember’, the program evokes feelings of nostalgia and captures Australia’s affinity for days gone by. With respect to the Koa people, Traditional Custodians of the land, the festival will also recognise the Year of Indigenous Tourism with First Nations peoples’ Dreamtime Stories, the latest feature films featuring Indigenous stories, and film tours with Indigenous tour guides.
Drawing on the legacy of independent festivals like Sundance Film Festival, Vision Splendid Outback Film Festival is the largest film festival dedicated to Australian cinema and looks to highlight the inspiring works of the local film industry. With 2020 ticket sales up 36 per cent on the festival’s previous record year, Festival Director Mark Melrose says the festival’s growing reputation in the film festival circuit attracts Australians near and far, while also playing a key role in promoting Outback Australia and the arts industry.
“Vision Splendid Outback Film Festival has gone from strength-to-strength since its inception and found its voice on the Australian film festival circuit as a not-to-be-missed regional instalment,” Mr Melrose said.
“The pandemic has left a cultural void for many Australians, and the festival presents a platform for local artists and creators to display their works – often providing the first run for some films that have struggled with commercial distributors.
“With the breathtaking backdrop of Winton and its surrounds, we’re able to create a truly unique outback experience that supports the local community and keeps festivalgoers coming back year-after-year,” he says.
The past year has seen an explosion of new productions, both from domestic and international players, and put Australia’s homegrown talent, state-of-the-art studio facilities and unique and dramatic locations in the spotlight. 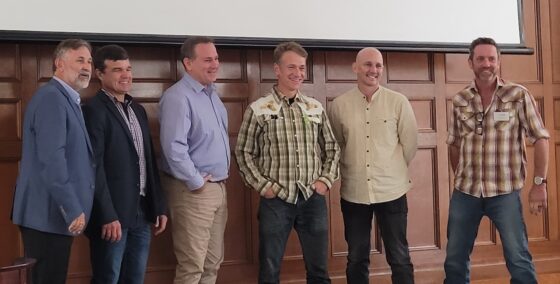 “From Indigenous masterpiece, My Name is Gulpilil to Hollywood blockbusters, Penguin Bloom and The Dry, this year’s Vision Splendid Outback Film Festival showcases Australia’s breadth of talent and Winton’s international reputation as a captivating film destination,” Mr Dolgopolov said.
“Australia’s film industry has hit its stride in the past year, and the festival is an opportunity to encourage and inspire people across the industry from cinematography and production to sound and lighting.”
For more information or to secure tickets for this not-to-be-missed outback experience, visit
www.visionsplendidfilmfest.com