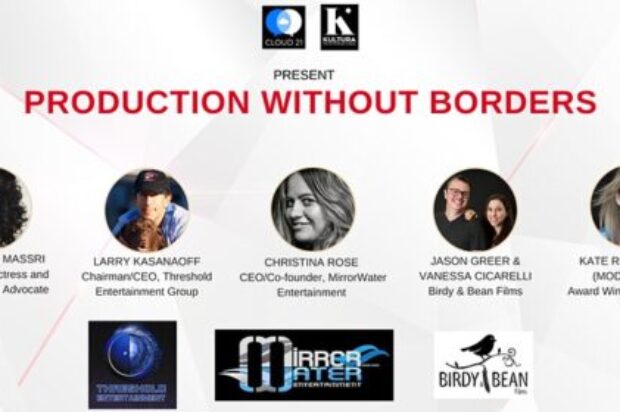 Cloud 21 International (www.cloud21.com) and Kultura PR International (www.kulturapr.com) are pleased to present the third annual “Production Without Borders” special event that will be held during the 2020 virtual American Film Market on November 10, 2020 at 11 a.m PST.

Register for complimentary event at: https://pwb2020.eventbrite.com

“We’re delighted to be able to hold our third annual Production Without Borders event once again this year,” comments Nicole Goesseringer Muj, founder Kultura PR International. “Even though the market will be online this year due to the pandemic, we can still reach the worldwide entertainment industry via our virtual event.”

“Our recent Global Entertainment Showcase held during the online Marché du Filme was a huge success,” adds Gotham Chandna, founder Cloud 21 International. “We’re pleased to invite the previous years’ attendees of our Santa Monica event, as well as filmmakers and industry executives from around the globe, to join us virtually in 2020.”

The online event will feature a panel of some of the top names and rising stars of the worldwide entertainment industry, including:

Yasmine Al Massri, International Actress and Human Rights Advocate
Yasmine Al Massri is an international actress and human rights advocate who lives between Los Angeles, Paris and Beirut. Her short film Refugee, written and directed by Brandt Andersen, was shortlisted for the 2020 Oscars. You can enjoy her latest work as ”Morena,” the Middle Eastern vampire on Netflix’s top animation show Castelvania. She guest-starred in Law and Order’s most acclaimed episode tackling the Harvey Weinstein scandal, and starred as twin FBI agents Nima and Reina Ameen who struggle in trying to be one person and fight terrorism in America in ABC’s drama series Quantico. She also played Selima El Sharad, Blackbeard’s love interest, in NBC’s drama series Crossbones.

Before her success in the U.S., Yasmine was well-known in Europe and the Middle East as an international actress, contemporary artist and dancer. Having a Palestinian father and an Egyptian mother, she was born and raised in Lebanon, and then moved to Paris at the age of 20 to study multimedia and live performances at the prestigious École des Beaux-Arts de Paris.

Yasmine’s first big break as an actress was in the award-winning Lebanese film Caramel, written and directed by Nadine Labaki that debuted at the 2007 Cannes Film Festival, generating great critical acclaim and becoming the most successful Arab film to date.

In 2008, director Najwa al Najjar cast her in the lead role of her award-winning film Pomegranates and Myrrh, alongside Hiam Abbass. The film opened at the Sundance Film Festival in 2009 and Al Massri went on to win the Youssef Chahine Best Actress Award for her performance at the Rabat International Film Festival.