ANDREI KONCHALOVSKY Moscow Netflix ROSKINO by Caroline Russo | on May 27, 2021 | 0 comments | in Film Festival | Like it 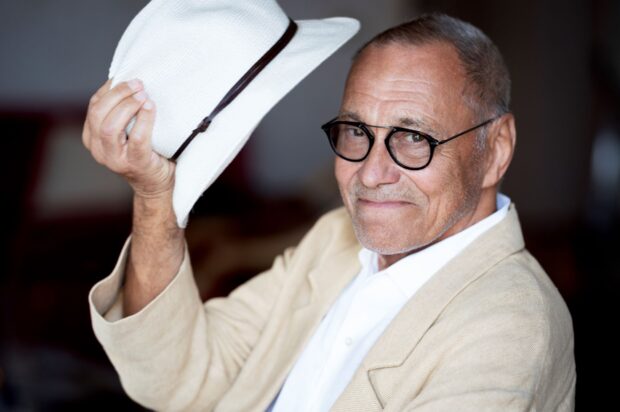 The international online content market KEY BUYERS EVENT: Digital today announced acclaimed director, screenwriter, and producer Andrei Konchalovsky will deliver the keynote address at the upcoming event organized by ROSKINO with the support of The Ministry of Culture, the Department of Entrepreneurship and Innovative Development of the City of Moscow and the Agency for Creative Industries.

Andrei Konchalovsky, the author of recent festival selections like The Postman’s White Nights, Paradise, Sin, Dear Comrades! will join ROSKINO’s CEO Evgenia Markova for an in-conversation on 9 June 2021. The event set for June 8 – 10, 2021 has now been extended due to an overwhelming showcase of content from 119 Russian companies and will run for 3 extra days of screenings and online matchmaking.

Andrei Konchalovsky has enjoyed equally distinguished careers directing on both stage and screen. The winner of multiple awards, both personal and for his work, as well as an acclaimed auteur, his career spans over seven decades.

A regular in the programmes of A-category film festivals, Konchalovsky has won the Venice Silver Lion (Best Director) award twice, for both The Postman’s White Nights (2014) and Paradise (2016) and the Grand Special Jury Prize for House of Fools (2002). In 1979 he won the Cannes Grand Prize of the Jury for Siberiade (1979); the San Sebastian Golden Shell for Homer and Eddie (1989) and Silver Shell for Uncle Vanya (1970); and the Karlovy Vary Crystal Globe for A Lover’s Romance (1974), to name a few.

His best-known credits also include English-language titles such as Runaway Train (1985), which earned three Academy Award® nominations, and The Odyssey mini-series (1997) produced by Francis Ford Coppola, Fred Fuchs, Robert Halmi Sr., as well as Tarkovsky’s Ivan’s Childhood (1962) and Andrei Rublev (1966) with Konchalovsky as a co-writer.

In recent years he has concentrated on shooting domestic and European films, his latest films include Sin, a Russian-Italian biopic of Renaissance artist Michelangelo, shot entirely on location in Italy. His most recent acclaimed feature Dear Comrades! premiered at the 77th Venice Film Festival, the film was awarded the Special Jury Prize.

ROSKINO’s CEO, Evgenia Markova commented: “Mutual and transparent communication is crucial for us – we aim to showcase Russian industry to the global community, as well as bring international trends to Russia. So, we tried to balance the keynote sessions from that point of view. Andrei Konchalovsky is one of the rare filmmakers who combines deep-rooted art tradition with a sharp look at the contemporary world, and the one who shows Russia to international audiences. Avi Armoza will share his international expertise and focus on global trends, which is of particular interest for the Russian community. Rob Kenneally, one of the most famous agents, works with both global and Russian talents and is a unique expert for both sides. We’re thrilled to have such an incredible line up of speakers who are shaping and transforming the industry.”

Avi Armoza, the pioneer of the Israeli formats industry internationally and one of Israel’s leading film and television producers, founder and CEO of Armoza Formats, will also deliver a keynote. Avi Armoza has served as Executive Producer on several of Armoza’s hit shows, including prime-time entertainment show I Can Do That!, which has become a well-known brand aired in over 85 territories, including in the US on NBC and prime time singing competition The Four, which has had two hit seasons on FOX.

Also attending the event as panelists are acclaimed casting director Frank Moiselle of Moiselle Casting (‘Vikings’, ‘Penny Dreadful’, ‘The Tudors’) to discuss the international career achievements and the future of Russian actors on the global stage. Joining the discussion of the global trend of Social Impact Entertainment is Andy Whittaker, Founder, and Chair of Dogwoof a London-based, documentary film company integrating production, sales, and UK theatrical distribution. Dogwoof has so far released 28 Oscar®-nominated documentaries, with four wins and an additional three BAFTA winners.

Netflix will be hosting an exclusive session to share expertise and experience on post-production, locally produced content, and how they collaborate with their partners. The session will be available for a selection of Russian companies upon pre-registration.

The full programme will feature 15 sessions and panel discussions, which will be available to the registered participants and press (except for the Netflix workshop).