PROMISE AND PROMISCUITY: A NEW MUSICAL BY JANE AUSTEN AND PENNY ASHTON “PRIDE AND PREJUDICE GONE WILD IN THE BEST WAY” Rip it Up, Adelaide

Flushed by four years’ success from Edinburgh to Toronto (and a week-3 weekly winner at the Adelaide Fringe), comes Kiwi Penny Ashton’s collaboration with Jane Austen (deceased). How will Miss Elspeth battle literary snobbery, cousin Horatio’s digestions and her mother’s nerves, armed only with a blushing countenance, excellent ukulele skills and being quite bright, you know…. for a girl? In this hilarious, one-woman show, Penny tackles all of Austen’s characters with song, dance and appalling cross-stitching.

“…you’ll be delighted whether or not you know your Bennets from your Dashwoods.” Canadian Broadcasting Corporation

“… Pride and Prejudice gone wild in the best way.” Rip It Up, Adelaide

“…a sparkling performer..” The Scotsman

Penny Ashton is NZ’s own global comedienne having performed over 500 solo shows all over the world. She has represented New Zealand in Theatresports and Performance Poetry and has performed by invitation at The Glastonbury Festival and Jane Austen Festival in Bath. She is a regular and original panelist on Radio NZ National’s The Panel and is a busy marriage celebrant. She also recently discovered she is related to Jane Austen’s rumoured flirtation, Thomas Langlois Lefroy. She is his 5th Great Niece! (This story is told in Becoming Jane with Anne Hathaway). 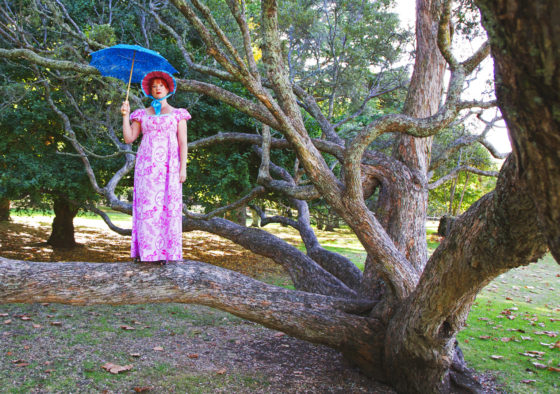