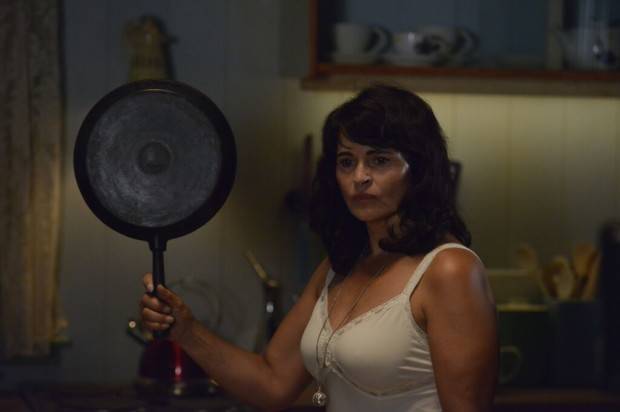 How would you describe the film, StalkHer?

I guess you would call it an intense, domestic, thriller, love story, twinged with cookery, drugs and investigative dialogue.

How did you end up getting involved with the film StalkHer initially and what was it about the project that drew you in?

John rang and asked me if I was keen to work on a two-hander with him and of course I said yes. I had been out of the limelight for a while bringing up my two daughters, who sing the title track StalkHer for the film. I have just stepped back into wanting to be an actress again.
That is my love when I’m not being the mother. The opportunity to work on a feature film with John and be able to dive into a role like Emily was too good to be true. It’s the most fabulous role. She’s a good girl, she’s a bad girl and she’s interesting. She’s a grown up and she’s a child. It was kind of everything and then some that I could have ever dreamed for.

What type of reaction have you been receiving thus far from the film tour?

People have loved it. Seriously I have been surprised at how much people have liked it. They have loved the inappropriate nature of the film. They love the fact they are seeing two older actors really going for it, in every way. Emotionally, us putting ourselves out there they like and they love the music too. They love the fact they know didn’t know where the film was taking them. Every twist and turn they were baffled and confused. That has been across all age groups. That includes 15’s up to 500’s. Quite a lot of older people come and see it. They like to see a representation that’s interesting with older people.

Has your family seen the film, what was their response?

My daughters have seen it and they said ‘Mum you’re hot’. If your daughters can say that in their early 20’s then I must okay. They didn’t want to stick their fingers down their throat and chuck up, so that’s good.

Your daughters, Maddy and Memphis Kelly (aka Wishful) wrote the title track, for StalkHer, how did they feel about writing the song?

They sung the title track song, Mark D’angelo and Craig Jansson wrote the song. The girls sang it and kind of reworked it a bit. Maddy and Memphis are great harmony singers as well as singer/songwriters themselves. They certainly understand the structure of a song. They took what Mark and Craig made and rewrote a bit of the lyrics and definitely reworked the way the song sat. This was to slide it into the feel of James Bond themed song. They worked the harmonies and finessed it. We are really close and we do lots of projects together. When the opportunity came up to do it, John and I sang that song first. We decided we needed another haunting vocal to it. We thought to bring Maddy and Memphis into it. They just smashed it and went ‘Oh yeah they did great’.

So you play Emily in StalkHer, tell me a little about your character and preparing for the role leading up to filming?

Emily is a complex theme and probably should have had therapy a long time ago and hasn’t. She has a messed up back-story if you go into that with things that happened to her as a kid. I was lucky enough to have the opportunity to work with Elizabeth Kemp. She comes from the New York acting studio, she came to Melbourne to do an event called the Julian Dream Workshop Week. This meant we worked with our dreams and the character we wanted to work on. I brought Emily into that workshop and it was a week long. Some days were 21 hours; it was crazy so I got to really explore every facet of Emily. If you’re working with Jung then you’re working with the shadow, which is the dark side. It certainly was appropriate in getting to know that darker side of the character of Emily. There’s a part of her that’s definitely hidden away, that we get to uncover when we go into her home.

How was it co-directing with John and starring in the film alongside him?

John and I have known each other since we were kids. Over 30 years we have known each other and we have worked together a couple of times. So working with Jon is kind of like working with a really good pal. We are comfortable with each other, respect each other and know how to push each other. We know how to talk things out and get the best out of each other. It wasn’t ever weird that’s what we do as artists. You work with people, it’s a collaborative process. It was just an extension of that and we were fortunate that we were able to do that. We had to be careful that we didn’t become self-indulgent in not having an outside eye watching us. We cared enough about the project and about each other to make sure we kept each other on track.

Is it likely you will work with John again?

I will work with him again, we get on really well. Like I said we have known each other for more than half our lives. For us when you find people that you like to work with you tend to come back and work with them again and again.

Do you have a further desire to do more directing in the future?

I worked as a theatre director for a long time. When I stepped away from being an actress and when I spent more time being a Mum and bringing up my kids, I started directing more. I was directing a lot of theatre and certainly directing film as an extension of that. For me it’s about getting good performance. I love directing I have been doing some while we have been doing this promotional tour for the film simultaneously. It’s a part of me that I enjoy very much. But for the moment I had unfinished business with my actress. She needed to come back and do some work.

What message do you believe audiences will take away from this film?

People are probably a bit messed up. Everyone has something going on that we don’t know about. People are complicated, passion is complicated. Hopefully that Australians are making great films with interesting characters.

What projects are you currently working on?

I have a little directing project; it’s a play that goes to primary school that works with kids with anxiety. I’ve got two short films called Pillars and the other called, The Entrepreneur. Those films are close to being complete.

Do you have any future projects that you will be involved in, that you can reveal?

I have a very small role in the film ‘Holding the Man.’ It’s a very important film to me because Timothy Conigrave and I lived together when I first moved out of home. Having Tim’s book being realised as a film, Neil Armfield the director wanted everyone who knew Tim to have something to do with the film. I feel really privileged to be in that. I did some work on the feature film coming out early next year called ‘What time is my heart’. It is a great film directed by Romi Trower, about a girl with multiple personalities disorder and a boy with OCD, I play their psychiatrist.