break the rock Monster films Qld Film Makers by Caroline Russo | on March 27, 2014 | 0 comments | in Interviews | Like it 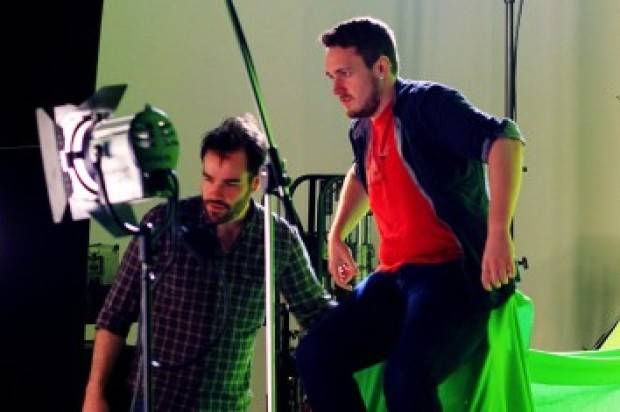 Michael O’Halloran is an independent filmmaker based in Brisbane and also the founder of Mohworks Films. A passionate emerging Queensland filmmaker, Michael self-funded his most recent short film ‘The Dossier Case’ and has now made an impressive concept trailer for what is to be his first feature, a monster film called ‘Break The Rock’.

Watching the trailer for ‘Break The Rock’, is the final product what you anticipated?
Yes, it is. It was exactly what I hoped it would be, for better or worse. Quite often you shoot something and you get into the edit and you look at it and you think ‘I remember this being better’ or ‘I thought we got a better take on the day’, but putting together ‘Break The Rock’ was fantastic, it was exactly what I wanted it to be. It was dream to edit.

How much of this was to do with the technology and production value of the project?
Well the gear was a lot better on this one than anything I’ve done before. We were really, really lucky to have a lot of amazing people to support the project and get behind us so we were able to play with the toys that the big guys use, I guess. But across the board, everyone really brought their A-game, from cast to crew.

Yes I read that light and Motion gave you a major donation of equipment.
Light and Motion very generously donated equipment and personnel to the project all to help give the concept trailer the production value of the full feature film. I really think they liked the idea and I think they liked the spirit in which we were doing things, so they were keen to get on board.

At this point in time, do you anticipate that the feature will be produced?
Oh definitely! I really think it will. This is a film I absolutely want to make and really feel will be a lot of fun and be very different. It has its roots in familiar sorts of films and genre styles but I think its concept is quite unusual also. I feel very confident it will get off the ground. We’ve had a lot of really good feedback on the trailer. Beyond making the full film, I think what we’ve made is not just a concept trailer for the film but also for the team. It’s almost like an audition showing what we can do with no money.

Where did the idea for ‘Break The Rock’ come from and why do you want to tell this story?
Well, the idea came from Adam Harmer, the screenwriter. He came up with the concept and I instantly fell in love with it. I could just see it fitting the style of so many of the great, big, fun monster movies I grew up loving. Not that we’re making a throwback as such… I think we need more movies that are just plain fun. And it was a concept for a monster that I’d never seen before and instantly sparked my imagination. I started dreaming up sequences and set pieces for the film. I just thought this would be so much fun to watch come to life!

What are the films that inspired and influenced how you put ‘Break The Rock’ together?
There are a lot of films and filmmakers that influence me anyway. Any time I think about action or adventure, I’m always thinking about ‘Raiders of the Lost Ark’, ‘Back To The Future’ and ‘Empire Strikes Back’. They’re really the gold standard for me and I find they are always on my mind. Specifically thinking about ‘Break The Rock’, the Spielberg monster films, ‘Jaws’ and ‘Jurassic Park’ were big influences.
‘King Kong’ was a big influence too, especially story-wise, in that our story concerns a theatre troupe that seek out interesting places to perform and find a monster, much like ‘King Kong’s film crew. So there’s some influence there in that I looked at how both the 1933 version and the 2005 Peter Jackson version balanced those elements. ‘Gremlins’ and ‘Ghostbusters’ were also big influences. Anything that combines fun adventure with genuine scares ended up being on my mind when we were developing the idea. I noticed you’ve worked with Adam Harmer on both projects, how did that relationship come about?
Adam and I went to film school together at QUT. We met there and immediately clicked. We liked so many of the same movies and wanted to make the same sort of movies too. And so we’ve been working together since we graduated in 2007. He’s a director as well so we work on each other’s films. I produced his last short film, The Doom Plan. He wrote and co-produced ‘The Dossier Case’ with me. We work extremely well together and we both have a similar vision for the kind of movies we’d like to make which, again, are like the movies we want to see. So yeah, we’ve been working together for a long time now. It’s very easy.

How did you fund your short film ‘The Dossier Case’?
That one I funded by working a lot! I had multiple jobs and worked every day, for the three years we spent making that one. We broke the film down into quarters, shooting wise. So I’d go to work for six months then we’d shoot a bit, and then I’d go back to work again, raise some more money and then we’d shoot the next segment.

Was it all shot in Queensland?
Yes it was. We used the Gold Coast and Brisbane. The film was a CIA film. Of course we wanted to make a CIA adventure film set in Cuba and the US in Queensland. Cuba in ‘The Dossier Case’ is just at Movie world. They let us shoot in the park in the Casablanca section to double as the streets of Cuba. And we used the Spit for our car chase. I think we got away with it.
‘The Dossier Case’ was good film for me to make in that it was kind of designed as the film where we made mistakes. We said let’s make this the one we make our mistakes in, let’s have fun with it. I really wanted to be the sole investor in it too because, though I believed it was going to be good, I also knew that I was doing things like trying to get away with doubling the Gold Coast for Cuba. There was a lot of potential for disaster and I wanted to be responsible for it. I noticed there were a lot of people from Queensland theatre in the cast of the ‘Break The Rock’ trailer. Was that a conscious decision?
Yes, absolutely. We have really amazing actors working here in Queensland. It’s not just the actors, but the crew in Queensland is extraordinary too. But a number of our cast I found just by going to the theatre and I was like ‘holy crap! They’re good!’ Hugh Parker, our leading man, was one. I saw him in a show and was like ‘Wow! Who is this guy?’ Then I saw him in a couple more shows and stalked him and said ‘hey, please be in my film!’ And luckily he said yes!
I think it’s especially fun having people like Margi Brown Ash too, who plays Angie. She’s a major face of Queensland theatre but having her on the other side, having her not in the theatre troupe as one of the locals was quite funny to me.

Yes, I thought that’s the great thing about it, everyone was from Queensland. And everyone volunteered, right?
Yeah, everyone volunteered so no one was paid. I think they were all there because they liked the spirit of the film and the enthusiasm with which we were making it. We were very lucky that so many great people put their faith in us. You don’t want to let that down.

Is it difficult being an independent filmmaker? Do you think of yourself as an independent in terms of your style?
Well, yes it is. But there are so many people willing to put their hand up to help that it becomes a lot easier. In terms of style, I feel like the line between being independent and commercial, is becoming more and more blurry. You used to be able to see an independent film and you could really tell but these days you can see Queensland independent films and you really can’t, the quality is just so good.
I saw a Queensland produced feature recently, Tailgate, and- it sounds like a back-handed compliment in a way but its not- as I was watching it, I forgot it was an independent movie, it was just so good! Which to me is pretty much the highest compliment.

Was that the reason you wanted to make ‘Break The Rock’ bigger and better than your typical low-budget film?
Kind of, yes…. my feeling was you could look at ‘Break The Rock’s script and be like ‘it’s a schlocky, quirky, low-budget kind of thing’ or, the way I saw it, you can make it a fun, Spielberg-y spectacle film. Even though there is a bit of camp or quirk to it, we didn’t want it to feel small. We wanted it to feel like it belonged on the big screen.

It seems that lot of people wanting to work in film move to Melbourne or Sydney or they go overseas to LA– would you like to do that sort of thing?
I would love to one day, sure. But really, to me, it’s more about being in the best place to make the movie I’m making at the moment. I don’t think we could have made the ‘Break The Rock’ trailer anywhere but in Queensland. Not only is the film set here, but we have so many great crew and cast members in Queensland and they were all excited by the idea of helping bring a big Queensland project to life. I feel like I want to be wherever I can work with talented, enthusiastic people who want to make great movies and right now that’s here.

It’s great that Queensland has people like yourself to build up the profile of the Queensland film Industry.
Well there are a lot of other great people making films in Brisbane too! I think the key moving forward is that we make more movies that don’t feel small and are made to be enjoyed by a much larger audience. With ‘Break The Rock’, we wanted to make it for everyone, a movie that everyone can enjoy. I think it’s going to be a fantastic film that audiences will really have a good time with. It’s a big, fun, scary adventure and one that I think will fit nicely alongside other great entries in the monster film genre.