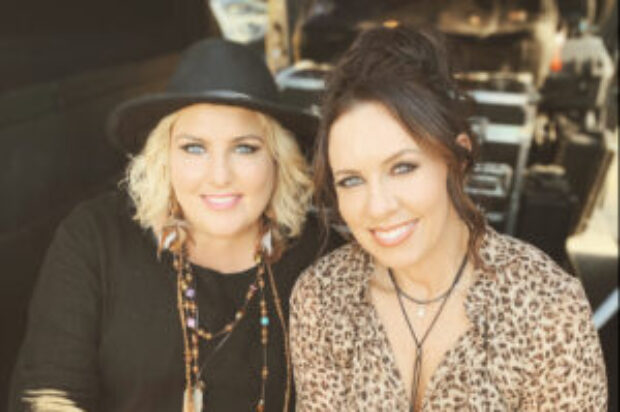 Innocent Eve have released their latest single ‘Mixed Bag’, and we worked a QA with the two sisters who Hail from a farm in Central Queensland.

Rachel and Bec Olsson – the Innocent Eve sisters – are a true testimony to the power of song as a binding force, and their new release comes off the back of the single ‘Viking’, which spent 16 weeks in the 2TM Top 20, including a week at #1.

We had a listen to ‘Mixed Bag’, and loved it and the sisters tell us bit more in our QA as to the song release plus whats been happening in the challanging COVID 19.

Q Tell us about new single Mixed Bag and its meaning to you?

A This song is our reflection on perceptions within society. We are both schoolteachers by trade and we noticed how young children so easily make friends with one another without judgement. They will play with a complete stranger in the sandpit or by the swing set, as they just see another human and they want to play. “Mixed Bag” makes comment on the idea of this youthful innocence and how as we age, our judgments become more rigid and prejudices around size, religion, ethnicity or gender can cloud the overarching need for love and acceptance. The song references the idea of society being a ‘Mixed Bag’ of people. Race, religion, identity. It all comes together. With children in mind, the concept of a mixed bag of lollies seemed fitting. Everyone loves a mixed bag of lollies, so why can’t we love a mixed bag of people and accept that difference can be a good, sweet and beautiful thing?

Q Where did you record it and how long did it take to get it all produced to final cut?

A We recorded this single as part of a whole 12 track album which will be released later in 2020. We recorded with producer and multi-instrumentalist Matt Fell at Love Hz Studios in Sydney over a period of about 10 days in the studio, and maybe 4 months of back and forth to get it exactly right. We love working with Matt. He is a creative genius who is so respectful of every artist’s unique sound, while managing to bring your idea to life with his creativity and talent.

Q Who produced the video? Did you have creative involvement?

A    Duncan Toombs at The Filmery produced the video. Working with Dunc is always a treat. A surprise. A creative explosion! We brought our own ideas to the table and so did Dunc. We definitely had creative involvement, but Duncan’s idea for this song kind of evolved along the way. Part was filmed last year and then it was finished this year during COVID19, so he had to get really creative with some parts during isolation. Duncan managed to capture the fun and cheeky side of this song, while maintain the message of inclusion, love and diversity.

Q When is album expected to be released?  We are looking at late in 2020.

Q What are you looking at in the next 12 months?

A   The next twelve months is hard to predict. We do have some festivals booked in, so hopefully they will go ahead as planned or at least in some form and we can be a part of them. Unfortunately, this year has seen Bec battle with thyroid cancer a second time. She had a neck dissection in March where some of the cancer had partially wrapped around her vocal cords. It’s been quite scary. She then underwent Radioactive Iodine Treatment and we are waiting to see the outcome of that. The future regarding the cancer is quite uncertain as we’ve recently found out that further treatment is required and potentially more surgery. Bec is such an amazing person. She is so strong and positive and resilient. Whatever happens, I know that she will face it head on and I’ll be by her side. Hopefully, we’ll be back singing and touring soon, but at the moment it’s hard to predict. All we know is that we have an album that we’re super proud of and we can’t wait to share the rest of that music with you, in whatever way we can.

A   Outside of music and the obvious reality all artists felt of no more gigs…we’ve been ok. We both live rurally, on properties where we were already pretty isolated. The only reason to go to town was to get groceries and that was only every 10 days or so. I’ve got 2 children who were home from school with me and it was actually lovely to be able to spend so much time with them. We also have a farm, so we were still going for walks or riding motorbikes, checking cattle, fishing in the dam. It wasn’t restrictive in the same way it was for others who were confined to an apartment in town. It was different for Bec who had to travel to and from Brisbane for her surgery and treatment, so she did some self-quarantine after those trips. But, outside of that, we still saw one another often as we only live 10 minutes down the road from one another. It was a bit like a forced holiday from the music side of things, but with Bec teaching and me being a farmer, our other jobs didn’t really stop as they were both “essential”.