1. How did the Melbourne Ska Orchestra came about?

We wanted to celebrate the 40th Anniversary of Ska in 2003 by putting on a gig at the Espy in St.Kilda. The Melbourne Ska Orchestra was basically an Allstars band made up up musicians in the ska/reggae scene around Melbourne. We were inundated with players who wanted to get involved so it’s been a big band from day one. The event was a complete smash and we thought we should do it again. We played once a year till 2009 where we decided to grow up and write some songs.

2. Could you briefly describe the style of Ska music and how it differs from Reggae, for people who aren’t too familiar with the genre?

Ska is the original seed of things Reggae, Rocksteady and beyond. It is distinctly Jamaican and it basically combines the boogie woogie influence of American Music with the heavy upbeat stroke of their traditional Mento music. It was also synonymous with the country’s independence from Great Britain in 1962. Early ska was full of optimism, up energy and exuberance.Still one of my favourite periods in music and always gives us a lift when the vinyl is spinning.

3. Do you think that the ska music scene has changed in the recent years?

I think it’s constantly evolving and because of its universal appeal it’ll be around for a long time. I think the distinct difference of late is the world music influences that have created hybrids that are unique but still respect the energy and form. I think the Melbourne Ska Orchestra are good exponents of this style.

4. And when it comes to the sound and style itself, a lot of music genres obviously change and develop overtime, do you think that’s the case for this particular style of music?

Modern recording techniques have certainly influenced the sonic structure of the genre. I think it is essentially community music so the sound of everyone in the same room, much like the early recordings, still has the best appeal for me. We took care when mixing the album to keep the room sound, especially with the horns so you could feel the resonance. I think the secret is in the combined harmonics of all the ingredients in the same space. Ambient microphones are crucial and in most cases this is the first thing we pull up in a mix. 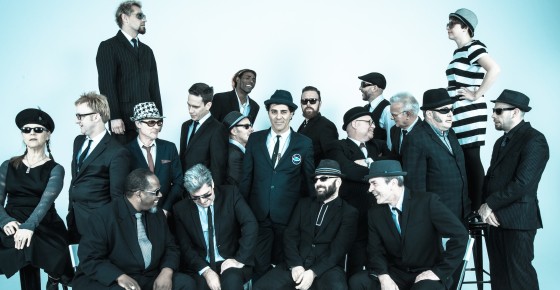 5. Now, there are 36 members in this band and you perform with at least 18 people, how does that effect the energy of the live performances?

I have never experienced so much joy and danger onstage at the same time. It’s a life force that propels you into a sense of community and love that is truly tangible. Safety in numbers can also mean a bigger train wreck but thankfully we’ve never derailed.

6. I’ve noticed that your group is very multicultural how many different backgrounds are in the Melbourne Ska Orchestra? 7. When it comes to your new album, ‘Saturn Return’, where did the inspiration of those songs come from?

Like Sierra Kilo Alpha, the songs were written as part of the same session but we just recorded too many good songs so Saturn Return is like the the second S.K.A. planetary mission. There were many writers involved but I would say personal experiences and observations/ lessons in life make up the majority of the inspirations.

8. Are there any artists in particular that have influenced you over the years?

We’re big fans of the Skatalites, Toots and the Maytals, Studio One recordings, Justin Hinds and the Dominoes, Owen Gray, Stranger Cole to name a few.

9. The Melbourne Ska Orchestra has performed in quite a few different countries and cities, which city would you say was your favourite? Why?

Istanbul and Japan spring to mind as does our first tour to Canada. Playing to 50,000 peeps in Montreal was kinda special. Looking forward to playing in Europe this year.

10. And could you tell us a little bit more about the upcoming tour dates?

Well in Australia , the next big shows are the SkaBQ dates around the country. A quintessentially Australian/Jamaican/UK celebration with a great line up, Caribbean food, Classic Scooters, drinking , dancing and extra mayhem. Looking forward to these dates with gleeeee!