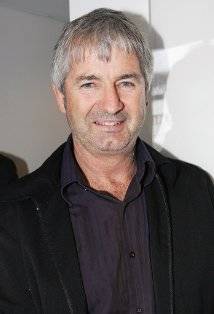 With the likes of Quentin Tarantino singing his praises and the much awaited reprisal of one of Australia’s creepiest villains in upcoming sequel to Wolfcreek, JOHN JARRETT’S star is well and truly on the rise.  Hush Hush Biz has a quick Q&A with the great Australian International Actor.

1  How did you decide to become a Actor and if you were not in this profession what would you have looked at doing instead?

I was involved in a concert at Longreach High School in 1968. The headmaster suggested that I should consider becoming an actor. I’d probably be a builder, I’ve built 9 houses plus worked as a builder’s labourer in between acting jobs.

2. You have had a great amount of work in TV and Films spanning now close to 35 years, what has stood out for you more so? TV or Film.?

38 years. My picks are, Picnic at Hanging Rock, The Odd Angry Shot, We of the Never Never, The Last Outlaw, Fields of Fire, All Men are Liars, Wolf Creek and Django Unchained.

3. How did you come to work on Bad Behaviour, which is now being released on DVD this year?

The script, always the script and I was impressed by Joseph Simms (director) and Kris Maric (Producer)

4. How does it feel to be regarded by filmmaker King  “Quentin Tarantino” as the best Australian Actor and what was it like when you first met up with him?

There are a lot of good Aussie actors, so it’s humbling that Quentin thinks that of me. I met him over a drink in Circular Quay in 2003 (I think) and here was arguably the best director of all time asking me questions about Oz film like an excited little kid.

5. Can you give us any good stories when you were on the set for Django Unchained?

Quentin came up to my partner and I on set and sang an Australian folk song to us at the top of his lungs, finished and walked on like nothing had happened. My partner said, “that man is beautifully mad” which I think is a very astute description of him.

6.  You are currently shooting Wolfcreek 2. Did you ever think there would be a part 2?

6.We were always going to do part 2, just took all this time for Greg Mclean to be happy with the script.

7.  In preparing for roles that are heavy duty, is their any preparation you do that has helped you over your years. Do you prefer playing the Bad Guy?

I always build a back story from when the character was born through to what I call page zero, just before page one of the script. Bad guys are usually more complex, interesting and funny.

8.  What advice do you give for anyone that is looking at coming into any form of film industry now days?

You’ve got to really want it. Absolutely determined, it’s not a hobby, it’s a job, a very tough job and you’ve got to know that you have a talent.

9. You have 5 children are any of them following in your footsteps?

I’ve got 6. My 2 sons with Noni have tried it, but not seriously.

10. Can you share some of the most outstanding times you have had so far as an actor?

There are many. The best for me was playing Jacko in Fields of Fire. I did a heartfelt speech at the bar of the hotel. For that instant I forgot I was John Jarratt completely, I WAS Jacko for a minute. Never happened to me before or since.

11. After Wolfcreek 2 what is next. I hear you’re directing a film?

My company Ozpix is making a film called StalkHer in June. It’s a gritty black comedy. Two people thrown together in a house one night. I play one of them and Sigrid Thornton plays the other and I’m directing it.

12. What are your favourite Directors, Actors, Movies?