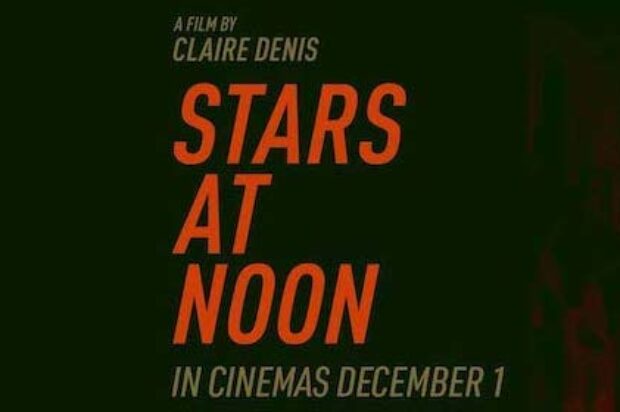 How did Stars at Noon come to be?

I discovered the poet and novelist Denis Johnson, relatively late, about 15 years ago.
His writing shocked me, and so I read all his work. Stars At Noon was the novel that struck me most. The way he sets his fiction amid a civil war, the tone – raw, ironic, and tender – pierces me.
His ability to describe the permanent disillusion- ment of his characters astounds.
Trish (Margaret Qualley) rushes into the street shouting: “Sin Esperanza, sin esperanza”.
Daniel (Joe Alwyn), before saying “I love you”, be- moans: “I’m caught, I’m caught”.
So, all is a love unreturned.
I didn’t think I’d find the courage to take on an adaptation of such a book.
Ten years ago, I spoke to Denis on the phone. He suggested we meet at La Haye, where he was at- tending a string of concerts.
We were both shy, and I didn’t dare mention my desire to adapt his novel.
In any case, he made it clear he would in no way participate in a script. He had undergone too many ordeals.
Stars At Noon tells his story: as a young man, he went to Nicaragua to “cover” the civil war.
He wanted to become a journalist, but all his ar- ticles were rejected.
It seemed he went through hell there, without mo- ney and without hope.
Back in the United States, he decided to write this novel, employing his notes and articles.

I’m not sure he trusted adaptation. But the film Je- sus’ Son pleased him, and I did not displease him. I learned of Denis’ passing while shooting “High Life” in Cologne. That’s when I said to myself: “I’ll give it a try”.

Written in 1986, Denis Johnson’s novel takes place in 1984 Nicaragua, during the Sandinista revolution. How did you treat this historical backdrop?

The film is not a period piece. It effectively takes place in present-day Nicaragua.
When we began shooting, Nicaragua was inacces- sible. The November 2021 elections led to much social unrest.
The film opens on a towering red tree, studded with lightbulbs. Next to it, another one, leveled and burnt. The President’s wife conceived these trees to symbolize Managua, Nicaragua’s capital. They each cost a fortune, money that would have been better spent on the people. Now, they’ve taken on a new meaning: the people’s anger.
The country of Panama was welcoming and per- mitted us to shoot on locations reminiscent of Ni- caragua.
As in the book, I wanted to describe a fortuitous encounter that becomes love, a sexual attraction that devours and blinds. And, as in the book, the violence rocking the country is seen from afar. Trish is a young American who wants only one thing: to return to the United States. Penniless, she has abandoned her journalistic aspirations.
Daniel, a young English businessman, appears reassuring and sincere, but in fact navigates between lies and obfuscation.
Their first encounter is transactional: Trish offers her- self in exchange for money. Isn’t this far from love?
It’s straight to the point. She prostitutes herself to survive, and he is not averse to paying for a fling. But this “conventional deal” dissipates once they go up to Daniel’s room. Skin to skin, few words, irony to conceal the confusion of what they feel.

The “sex scenes” are very present in the film.
And in the book as well.
I hope they don’t seem trivial. I wanted to film them frankly.
Eric Gautier chose “old-school” lenses. They were heavy and cumbersome, but they let us shoot Mar- garet and Joe as close as possible, with a mutual confidence. And I’d like to say: with love.

How did you choose your two leads, Margaret Qualley and Joe Alwyn?
I saw Margaret in Quentin Tarantino’s Once Upon a Time in Hollywood.
I contacted her. She said yes straight away.
Then the pandemic hit, and Margaret waited al- most three years for us.
Her confidence never wavered, and when she sensed I was overwhelmed, she would call me from Vancouver, where she was shooting “Maid” – a cheer up call.
I thought Robert Pattinson would play the Engli- shman, but the pandemic locked him into The Bat-
man for over two years.
I met Joe Alwyn over Zoom. I was in Panama and it was a few days before we were slated to shoot. I liked him a lot in Ang Lee’s Billy Lynn’s Long Halftime Walk. Ang Lee is incredible at observing actors, at loving them, at revealing themselves to themselves.
It happened very fast. We spoke on Friday. Him from London, me from Panama. And without hesi- tation, we felt the desire to work together.
On Monday, he flew to Panama.
With Margaret and Joe, all was simple.
Their talent, their engagement, their comprehen- sion of the characters, and above all, the way they complement each other. She is a resurrection of Paulette Goddard in Chaplin’s “Modern Times”. He is so blond, so tender, so sweet, his white skin like a cloud suspended above his body.

It wasn’t a simple shoot, was it?
No, but the excellent, mostly Panamanian crew, cohered easily with the French crew, and all the problems became solutions. It’s raining? Well,
we’ll shoot the rain. Not the set we’d hoped for? No big deal, we’ll find a better one, etc… A crew of fellow travelers.
The film hinges on the passion of the two protagonists, but it regularly opens onto landscapes, both urban and rural.
For me, they are two lenses in one pair of glasses. Eric Gautier, the cinematographer, and I agreed on everything. We were on exactly the same wavelength.
We traveled all over Panama with Arnaud (the set designer), Tello (the location manager), and Oli- vier Helie (the line producer). The landscapes be- came ingrained in our minds. Locations just struck us as obvious. It was an esthetics of obviousness.
“ With Margaret and Joe, all was simple.
Their talent, their engagement, their comprehen- sion of the characters, and above all, the way they complement each other. ”

Stars at Noon oscillates between Jean-Pierre Mel- ville’s Les Enfants Terribles and Nicolas Ray’s They Live by Night.
The boy and the girl fall madly in love, like children for the first time. And to save their skin, they try to make it to the Nicaraguan and Costa Rican border. Loving and fleeing are a nice pair, and in both cases, it’s a similar suspense. Their desire stays unfulfilled because they know they lack the time to wear each other out. They race forward, some- times at full speed, sometimes in slow motion, in an absolute present, wanting to shout “Just a litt- le more!” because they sense the finish line spells their end. Inevitably.
The characters’ psychology and backstories are barely alluded to because everything happens
between them so quickly. Their nascent love is so rushed, so caught up in the moment, that they fear unmasking themselves fully to each other. Trish says she is from here and there. Daniel says he’s married. But we can imagine that they lie blithely to purge any questions about their past, or worse, their future.
Their love is not a pretext to tell a story, to defend a cause, to explain a situation, or to save a world in decline. Their passion is a coat of arms, an ode to love, thuggish and undocumented.

Tell us about the other actors?

Working with Benny Safdie was my dream. He worked around his schedule and came to Pana- ma for a few days. He brought a disarming intel-
ligence to the part of the CIA agent. I met Danny Ramirez at a casting session in LA just before the pandemic. Thankfully, we stayed in touch. During pre-production in Panama, we chose actors (pro- fessional and non-professional) with the help of a local casting director–the type of person who mo- ves heaven and earth for you.
I will never forget meeting with Nick Romano, who plays the Subteniente. For a while, he could not believe that it was him, only him, that I wanted for the role.
Interview by Gérard Lefort