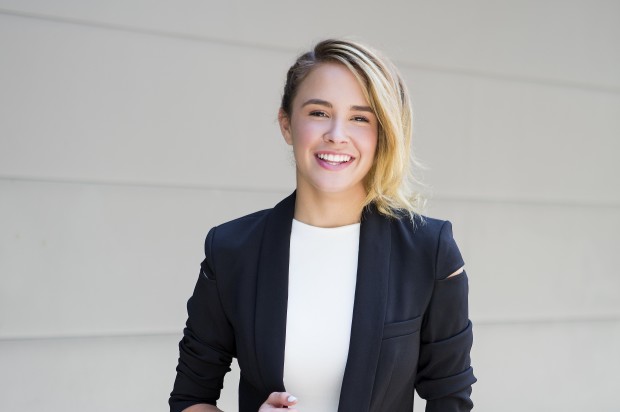 Based on the bestselling books written by Olympic gold medalist, Alex Morgan, Amazon Studio’s original series “The Kicks” has shot Sixx Orange into stardom as star soccer player ‘Devin Burke’. We spoke to the starlet about sports, moving cross-country and her successful new show.

HHB:Hi Sixx, congratulations on the success of “The Kicks”. Can you tell us a bit about the show?
SO: Hi! Thank you so much! The Kicks is about my character Devin Burke who is about to be named the captain of her soccer team. But then she has to move from Connecticut to Southern California for her dad’s job. Devin is of course super nervous about going to California because she knows there is many amazing soccer players that came from there. She soon finds out at her soccer tryout for her California schools soccer team is a joke. Luckily Devin is determined to bring out the best in her schools team and make them better.

The show is based on a book series, did you read the books before filming “The Kicks”?
Prior to filming I had already read the first Kicks book “Saving The Team”. Now I have read the second and third one!

The books were written by Olympic gold medallist Alex Morgan; did you get to meet her for starring as Devin?
I got to meet Alex Morgan during the pilot because she had a cameo in the episode. It was a surreal moment for me because before I even pursued acting or moved to California I would go watch Alex play whenever she came to my hometown!

Can you tell us a bit about your character Devin Burke?
Devin is a kind hearted but also a driven focused girl. She lives and breathes soccer. Any chance she gets to touch the ball she takes, without soccer Devin wouldn’t be herself. Besides soccer she loves her family and friends and always strives to be the best Devin she can be.

Do you and Devin have much in common?
Yes! Devin and I have lots in common. Just like Devin I moved from the East coast to the West coast and was extremely nervous to try out for a team. I knew soccer was a whole other level in California so I felt like I was about to face a huge challenge. I also connect with Devin on a personal level when it comes to pushing myself to be better. I am constantly critiquing myself and my skills in soccer and acting. But just like Devin I will never give up on my passion.

You’ve been playing soccer since you were 5; what does the sport mean to you?
Soccer means everything to me. There is no feeling like stepping on the field and being ready to kill the game. I love every part of soccer but my favourite part is being a part of a team. For me my team is my family the girls are like my sisters! We all have a common goal and work harder then ever on the field not only for ourselves but for each other.

Did you play any other sports growing up?
At the age of 4 I played lacrosse for only a season. Then I started soccer and I knew instantly that was the sport I wanted to play. And at about the age of 12 I started basketball which I really enjoyed but ended up stopping once I moved.

Your character Devin struggles with moving from Connecticut to California, you had a similar experience moving from Maryland to LA. Did that help you get into character for the show?
For sure! Obviously it was my choice to move to LA and Devin didn’t really have a choice but we had similar feelings. It was really hard to leave all of my friends, family, team, and pretty much everything I knew behind. I knew nothing about the life style in LA! I went from being a normal girl to an actress in a blink of an eye. Devin had a life that she loved in Connecticut and had to leave it behind for her dad’s career. But I think we both loved the idea of starting over, not necessarily forgetting our roots but exploring new things and new ways of doing things.

How do you balance playing soccer and being an actress?
Well for me acting comes first because that’s what I moved across the country for but I still put a lot of work into soccer. I have soccer practice 2 times a week and games on the weekend and so far acting hasn’t collided with that. But in my case playing on my club team is a great thing because I’m staying active and as I get better Devin gets better too! Its just about priorities for me really!

Who do you look up to in the industry?
My main idols are Meryl Streep and Jennifer Aniston! Meryl Streep is just incredible she can play anything and be 100% devoted to that character. I love Jennifer Aniston because I am a huge Friends fan and pretty much love all of her work.

What is next for you?
At the moment I am waiting for season 1 of The Kicks to come out but I am still auditioning and studying acting. So soon I hope to be working on some other things and maybe exploring other parts of the industry.

Any other comments?
Make sure to check out the first season of The Kicks on Amazon Prime later this Summer! It’s a fun and exciting season!