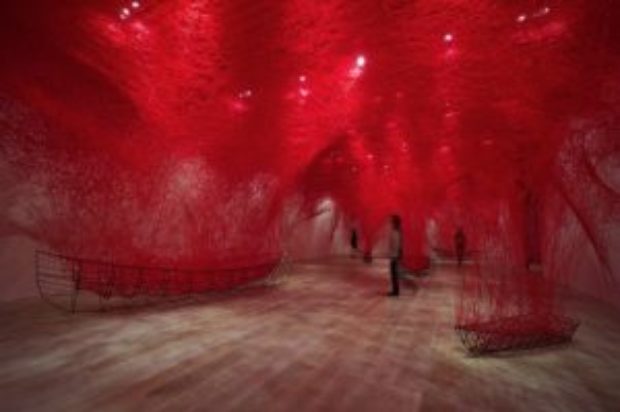 ‘From 21 March to 2 August, ‘Mavis Ngallametta: Show Me the Way to Go Home’ will be the first major survey of the artist’s work. It’s a celebration of Mrs Ngallametta’s art and life and it will feature many large-scale paintings of her country in and around Aurukun in Far North Queensland.

‘An elder of the Putch clan and a cultural leader of the Wik and Kugu people of Aurukun, Mrs Ngallametta was one of the most well regarded senior community-based artists in Australia. She made a profound contribution to arts and culture nationally before her passing in 2019,’ Mr Saines said.

‘Shiota is known internationally for her transformative installations constructed from millions of fine threads and works that express the intangible: memories, anxiety, dreams and silence. ‘The Soul Trembles’ is the largest solo exhibition of Shiota’s work to date,’ Mr Saines said.

From 27 June to 5 October ‘Unfinished Business: The Art of Gordon Bennett’, will explore the late Queensland-born artist’s interdisciplinary practice from his art school years in the late 1980s through to his untimely death in 2014.

‘With rarely and never-before-seen paintings, installations and drawings, ‘Unfinished Business’ will highlight Bennett’s passionate, ongoing interrogation of society and the impact of history and world views on the way individuals and cultures are understood. Additionally the exhibition will shed light on the importance of drawing as part of Bennett’s creative process.

‘We are thrilled to be working closely with the artist’s estate and many collections on an exhibition that will give fresh insight into Gordon Bennett’s ideals and objectives, while amplifying his significant contribution to Australian art,’ Mr Saines said.

‘Equally, we are excited to present a major survey exhibition on the work of leading Australian photographer and performance artist William Yang from 19 September 2020 to 7 February 2021.

‘Queensland-born, Sydney-based Yang is known for his raw and joyous depictions of Australia’s gay and lesbian scene in the 1970s and 80s. His documentary photography and performance across five decades has been informed by the cultural and political pressures of growing up as a gay man from a Chinese immigrant family in north Queensland.

‘The exhibition at QAG will trace Yang’s career through an expansive presentation of his photographic work, along with select video works and a newly commissioned spoken word performance,’ Mr Saines said.

From March 2020 until mid-way through 2021 the Gallery’s regional touring program will take ‘Patricia Piccinini on Tour’ and ‘Island Fashion on Tour’ to venues throughout the state including in Townsville, Toowoomba, Cairns, Mackay and beyond.

‘Island Fashion on Tour’ from January to April 2020.