Down Syndrome Association DSAQ Origin Sports Swimming TITANS by Caroline Russo | on June 22, 2016 | 0 comments | in Whats the Buzz | Like it 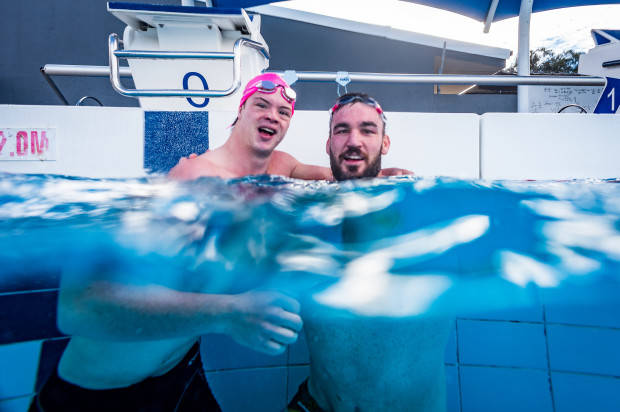 The Maroons team have won today’s State of Origin swim relay between four young Queensland swimmers with Down syndrome, who are off to Italy next month to compete in the Trisome Games, and Titan players Luke Douglas, Tyrone Roberts, Lachlan Burr and Ryan James in a 4 x 50m relay. (note Tyrone replaced Anthony Don).

And it’s all part of the Aquis Gold Coast Titans’ support of Down Syndrome Association Queensland (DSAQ) and the young athletes who will be taking part in the Trisome Games world championships in Florence from 16-22 July. 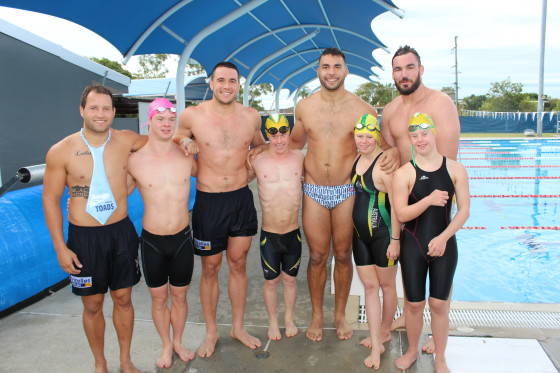 Titans prop Douglas is an ambassador for DSAQ and when he learned that several Down syndrome athletes from the association were heading to the Games to compete in swimming, he was keen to bring awareness to their achievements and help- with fund-raising.

At one home game each year the Titans involve DSAQ in activities which includes Down Syndrome Association members running onto the field with both teams. That will take place again in our round 16 clash with Canberra Raiders at Cbus Super Stadium this Sunday. where both clubs will together to promote DSAQ’s ‘More alike than different’ campaign. As a lead-up, and to celebrate State of Origin fever this week, we decided to give four world class swimmers – Michael, Taylor, Russell and Caitlin – a warm-up event at Miami pool where the Titans do their weekly recovery sessions.

The race went right down to the wire, with Michael slipping past Luke in the final few strokes.