brisbane powerhouse queer film festival by Caroline Russo | on April 1, 2013 | 0 comments | in Film Festival | Like it 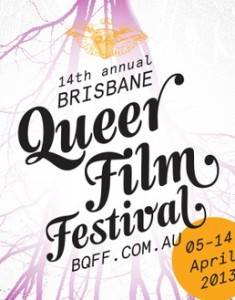 This year the festival introduces the Australian shorts series and, according to Festival Director Sarah Neal, the films truly represent the diversity of contemporary queer life.

“The Brisbane Queer Film Festival program has been curated with an eye to contemporary and historical issues both light-hearted and dark.

“From the crisis facing homosexuals in Uganda, to the private life of James Dean; from a comedy about the Serbian Gay Pride March to a look at the back-stage dramas at London Fashion Week, there’s a wealth of outstanding international cinema to experience.

“A new addition to the festival this year is the Australian shorts series – six films from local filmmakers looking at everything from The Golden Girls fan-fiction to Croatian romantic dramas. This new film package will complement our much loved Girls and Boys Shorts.

“If you’re looking for entertainment, escape or enlightenment in fine company, Brisbane Queer Film Festival is the place to be.”