RED CARPET LIVE CHATS WITH THE STARS OF THE HATEFUL EIGHT 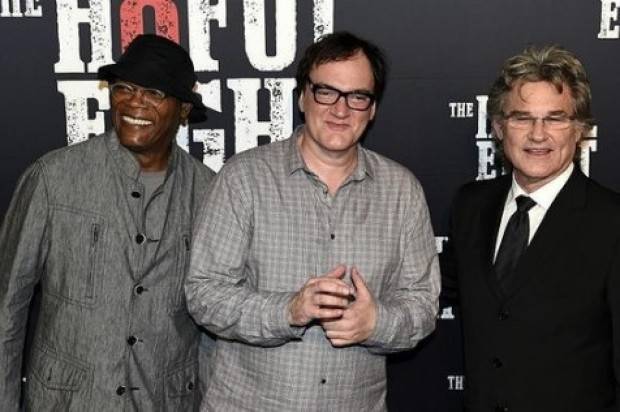 RED CARPET CHATS WITH THE STARS

On the eve of the Australian premiere of ‘The Hateful Eight’ in Sydney, writer/director Quentin Tarantino and his two leading men, Samuel L. Jackson and Kurt Russell, attended the event to lend their considerable fan-favoured weight to the evening’s proceedings. As Tarantino was ushered about to specific media groups before sipping on a local beer and enjoying his lavish film with a crowd of enthused fans, Russell and Jackson did the rounds on the black carpet where I was fortunate enough to check in with the two on their experiences working with the cinematic maestro that is Quentin Tarantino.

With his self-proclaimed “bombastic” moustache nowhere in sight Kurt Russell looked more movie star than usual as he touched base with the on-hand media where he described working with Tarantino as “a great opportunity”.

“He (Quentin) gives you the opportunity to create memorable characters, no matter what the subject matter. He (John “The Hangman” Ruth) was unlike any character I’ve played before”

As exciting as it was to collaborate on the character, Russell did mention that bringing the energy required for his particular character was a challenge to recreate each day. I can only assume the moustache helped though.

When it came time to sharing face time with the incomparable Samuel L. Jackson there was an increase in the level of excitement that was brimming in the foyer of the George Street Event Cinema. It didn’t escape the media group that the actor has played some of the most iconic characters in film history (an Avenger and a Jedi for starters) but how did his ‘Hateful Eight’ character hold up in comparison?

“He’s an important character in one of Quentin’s stories. Once again he’s a smart guy, he’s a ruthless guy, and he’s got a history…a story to tell. And Quentin lets him tell it”

Comparing his characters was one thing but it was much harder for him to pinpoint a favourite from his backlog, and as for if he’ll work with Tarantino again?

“He’s got a few things yet to tackle; I know he wants to do a horror film one of these days”.

A wave of enthusiasm crashed over us at the idea of Tarantino putting his stamp on the horror genre, and Jackson said he was more than willing to put his hand up for it – “If he wants me to read it, I read it”

As ‘The Hateful Eight’ charges into theatres this week there’s a certain air of sadness that follows as the long-standing rumour that Tarantino will retire after he makes his 10th film still lingers. With 8 down we’re only a duo away from potentially losing one of cinema’s most unique, and divisive, players – but at least we know he’ll go out with a bloody bang.