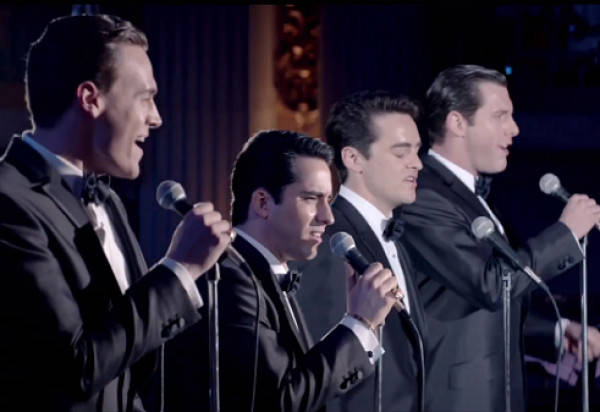 While Clint Eastwood doesn’t seem like the most likely choice to direct the feature adaptation of the Broadway musical ‘Jersey Boys’, there’s no denying his strength behind the camera and he usually has a hand in composing his own soundtracks so he does at least strike as a viable candidate. I haven’t been fortunate enough to see the stage production so I have nothing as a basis of comparison (though I was informed the show blew this out of the water) but even on its own merits, this theatrical take on ‘Jersey Boys’ is particularly deflated.

Presented as more of a straight-forward musical biopic than an all-out musical, ‘Jersey Boys’ chronicles the rise (and fall) of the group The Four Seasons from their struggles to get heard to the in-fighting that brought them down at the height of their success; it’s a tale we’ve seen many times over, and unfortunately one we’ve seen done better. In a case of one ingredient that the film both excels and fails to deliver on is the casting of John Lloyd Young as lead singer Frankie Valli who is pitch perfect in terms of his vocal ability; the actor performed the role on Broadway and effortlessly nails Valli’s trademark falsetto. And though there’s nothing wrong with his performance per se, it’s a tough pill to swallow in the early stages when he portrays Valli as a 16-year old looking closer to the mid-30’s of Young’s actual age. Michael Lomenda and Erich Bergen as members Nick Massi and Bob Gaudio respectively have the lesser showy roles, which perhaps make them stand out even moreso, and Vincent Piazza as the group’s founder Tommy DeVito is the most “cinema” created character with the actor walking around like he’s stepped out of a Scorsese movie. Funnily enough Tommy DeVito ended up being used as Joe Pesci’s character name in Scorsese’s ‘Goodfellas’ as a nod to Pesci’s real-life friendship with DeVito, something that is mentioned throughout the film. The best bit of casting though is that of Christopher Walken as a loan shark of sorts who clearly holds a soft spot for talent. Walken possesses enough likeability that even in the minutest of supporting roles he makes his mark, and is often missed when away from the screen.

Seemingly not learning from his ill-received ‘J. Edgar’, Eastwood has once again travelled the old-age makeup route with disastrous results as the finale presents the quartet as elderly men looking far more grotesque than they should thanks to some shocking cosmetics, proving that even someone as talented as Eastwood is capable of a flub. Similarly his choice to use process shots during the driving scenes which recall a bad sixties beach movie seem wildly out of place with the rest of proceedings. Whilst these stand out the most when recalling the film’s more negative aspects, overall everything is just so flat that it ironically becomes difficult to pinpoint where the film goes wrong. Eastwood does get points for his lively climax though as he produces the one true “musical number” during the closing credits which brings the cast together for a lively rendition of “December 1963 (Oh, What A Night)”. The energy produced here almost makes you wish the whole film had adopted this approach, though it undoubtedly would’ve been difficult to sustain.

I wanted to enjoy ‘Jersey Boys’ far more than I did, and it’s a shame it didn’t deliver given the talent and music involved, though its soundtrack can’t be faulted in any way. By no means should Hollywood give up on producing musicals for the big screen but at the same time not every show on Broadway needs to be given the theatrical treatment. If you’ve seen the stage show you’re better off not tainting the memories with this feature, and if you haven’t been as fortunate, stick with the soundtrack and Eastwood’s back catalogue.