Rich and Famous Homes For Sale 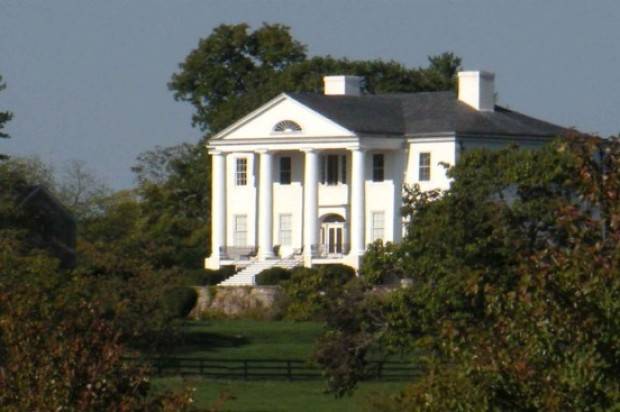 George Washington Cousin’s Farm!
Sixty minutes west of Washington, D.C. puts one right in the middle of Virginia’s famed horse country. Celebrities, high-ranking politicians and old-guard families gravitate to the verdant rolling hills, deep forests and mountain views of the upper Shenandoah Valley down to Charlottesville. Any driving route into the District of Columbia has views of elegant estates and pastures populated with fine horse flesh. Late spring is an especially nice time for a driving tour when new foals prance alongside their well-bred mothers. This is where the Colonial tradition of fox hunting still reigns as the primary social sport and most any Saturday afternoon there’s a steeple chase to attend. The entire area is blessed with a plethora of picturesque villages, fine restaurants and country inns to explore. This is also a good area to visit some of Virginia’s wineries and enjoy their tasting rooms. Steeped in history, the town of Manassas was the site of two major Civil War battles on the banks of Bull Run, and throughout the area. Colonel John Singleton Mosby, the famous Confederate raider, is well remembered for making the neighborhood miserable for the Civil War Yankees.

George Washington’s first cousin, Warner Washington, purchased over a thousand acres from Lord Fairfax, just north of Berryville, Virginia in 1764. George knew the area well since he worked as a surveyor on the Fairfax land. He visited Warner many times, making the ride from Mount Vernon after Warner had built his mansion, Fairfield. Today, it is known as Clifton Farm, located on more than 400 acres of the original Fairfield estate. The farm along with livestock management buildings, main mansion and guest homes will be going to auction on June 3rd.

With presidential connections and strong historical background, the highest bidder will be only the fourth owner in the history of this estate. Started in 1795 and completed in 1834, the house has been totally restored by its current owners, maintaining its original Colonial charm, including the original heart pine floors and upgrading the features expected today. Built in the Palladian Classical Revival Style with a four-over-four floor plan, the rooms and central halls are large and airy with tall windows and twelve-and-a-half-foot ceilings. There are five bedrooms, five baths, formal rooms, a library and seven fireplaces. The guest house, named Little Clifton Manor, was built of stone in 1844 and has three bedrooms and a library. The original stone summer kitchen and round ice house have been restored and were there when George Washington strolled the property. Farm operation facilities are complete and efficient for both a cattle operation and for horses. Livestock are not included in the sale. 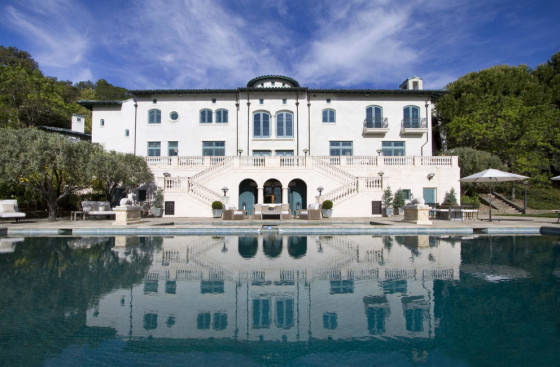 Robin Williams, Juilliard-trained actor and comedian, clearly has had it all. From his first guest appearance as Mork in “Happy Days” to his new films, “Secret of the Tomb” and “Dr. Jekyll and Mr. Hyde,” to be released later this year, and with a “Mrs. Doubtfire” sequel announced for 2015, Robin is one of America’s busiest celebrities. Is it any wonder that Williams never has the time to spend at his stunning California vineyard estate?

Villa Sorriso, located in the Mayacama Mountains and straddling the Napa and Sonoma Valleys, sits majestically among 23 acres of vineyards and olive groves, with about 653 acres in six parcels. Views over the valley are classic Napa and the land is blessed with a natural pond, groomed and landscaped grounds, all expertly maintained by an on-site estate manager. A productive estate, there are over 100 olive trees which can produce 30-50 gallons of oil per year, approximately 18.4 acres of vineyards producing Cabernet Sauvignon, Merlot and Cabernet Franc wines with existing contracts through 2014.

Within the 20,000 square feet of living space in Robin’s villa, there are five bedrooms, six full baths, five half baths, library, theater, elevator, climate-controlled cellars for art and wine, bridge gallery and viewing tower overlooking the valley. Also featured are three safe rooms and smart house technology. Antique European stone terraces surround pools and sculpture gardens. The 65-foot infinity pool overlooks valley views, lawns and lush landscaping. Roads access 53 acres and the remaining acreage can be enjoyed by horseback. A stable is provided for your horses. The property adjoins the thousands of acres of Sugarloaf State Park and the entrance to Villa Sorriso is at the end of a public access road, guaranteeing privacy. Live in magical Tuscany without the inconvenience of travel. 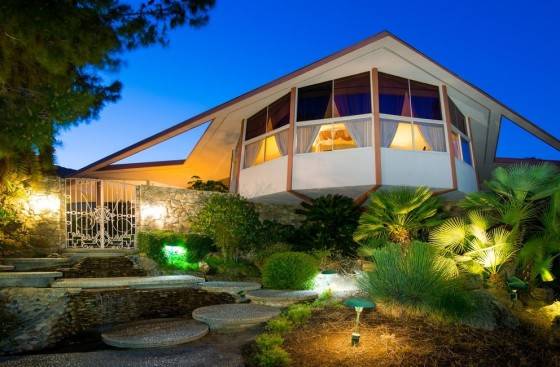 Elvis Honeymoon House!
With Graceland being our knee jerk connection between Elvis and where he lived, the reality is that Elvis was connected to a number of properties. He bought Graceland at age 22 when the $40,000 house he’d purchased a few years earlier for his mom and dad became inundated with fans and press that disturbed the neighbors. At that time, he handed his parents $100,000 and told them to go find something more fitting. So Graceland actually was inhabited by his parents, grandmother and later his aunt – more a family home than that of a successful young man on his own. He lived at Graceland, on and off, but Elvis was spending so much time in California due to his career that he also lived in other homes closer to the studios.

Possibly the most interesting of all was this mid-century modern in Palm Springs that Elvis leased for a year as a respite from the rigors of his fast paced life in Hollywood and where he and Priscilla spent their honeymoon. Romantic and private, those in the know about this honeymoon retreat, enjoy telling about their daughter, Lisa Marie, being born exactly nine months later.

The Alexander Estate, originally home to developer Robert Alexander, was often referred to in 1966 as “The House of Tomorrow.” It was designed with three stories in four concentric circles with not a square room in the home. Though this was a cutting-edge concept in the U.S., circular design has long been favored by some cultures who believe evil spirits hide in square corners. The 5,500-square-foot contemporary home has four bedrooms, five baths and Art Deco design and furnishings throughout with mountain views. The exterior has lush plantings affording complete privacy for the pool, stage, private garden, tennis court and fruit orchard.

The home has been featured on the Travel Channel, Fodor’s Travel Guide, Time Magazine and Architectural Digest. A number of Elvis-related films have been shot there and the pool is said to be the most photographed in the Valley.