MEMOIR RIGBY SHLEPT TERRENCE RIGBY by Caroline Russo | on September 9, 2015 | 0 comments | in Book Reviews | Like it 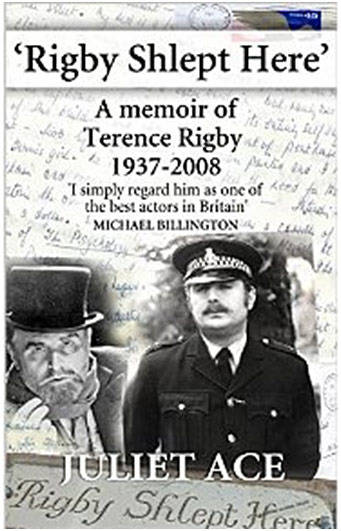 Fulfilling a promise to Rigby, dramatist, Juliet Ace, recounts the life and career of the man many critics hailed “the best actor in Britain”. Through vignettes, letters and memos, Ace not only chronicles the life of Rigby both under and out of the spotlight, but gives vital insights into what it was like to work with some of the greatest names in television and theatre during his life. One reviewer recently wrote, “Terence Rigby would be astonished by the sight of himself, I think … His shade, and his memory, have been fortunate in their chronicler..”

United Kingdom –Before his death, actor Terence Rigby asked dramatist and close friend, Juliet Ace, to assist him in compiling his biography. With such a wide and varied career, Ace knew it would be no easy task. Unfortunately, Rigby died before she had even scratched the surface.

However, seven years later, the fascinating volume is complete and finally being published to the world. While millions knew Rigby for his exuberance on screen and stage – he was a deeply private man. In ‘Rigby Shlept Here: A Memoir of Terence Rigby’, Ace bares all for the first time.

In a post card, Rigby wrote to Juliet: “Have you made much headway with the scandalizing version of my biography? I’ve certainly started on yours.” But as director and critic Ned Chaillet notes in his foreword, “Juliet Ace has written much more than a ‘scandalizing’ life of the wonderfully memorable and professionally esteemed actor that was Terence Rigby “

He was one of Harold Pinter’s favourite actors – memorably creating Joey in The Homecoming and Briggs in No Man’s Land – and Terence Rigby’s television work ranged from the dog-handler Sergeant Snow in the police series Softly Softly to the rough-hewn spy Roy Bland in the great Tinker Tailor Soldier Spy with Alec Guinness. His performance as the newly created character Albert the Horse in Alan Bennett’s version of The Wind in the Willows at the Royal National Theatre was widely praised and gave voice to Rigby’s deadpan humour in his native Brummie accent. But this very public and exuberant actor retained a deeply private life, a mystery even to the agent who served him throughout most of his career.

In her biographical memoir of Terence Rigby the dramatist Juliet Ace offers a rare glimpse into his private world while exploring his work and artistic process. It is a picture of an actor’s life that is at once intimate and professionally revealing, ranging from the privacy of repeated encounters over Juliet’s kitchen table to the memories of his contemporaries and colleagues, ranging from Peter Hall and Michael Gambon to fellow students from his RADA days, spiced by Rigby’s own notes and letters.

“I first met Terence in the 1960s and we became extremely close. I had an inside look into his life that was equally as tumultuous and engrossing as the personas he portrayed to the public,” explains Ace. “Rigby was a great man, a true “actor’s actor” who forged rock-solid friendships with people on both sides of the Atlantic. He was also so multi-faceted in his work; becoming one of the most notable faces on British television and, after getting his U.S. Green Card, replicating that same success on Broadway.”

Continuing, “As much as this book is about Rigby’s life, it’s also about great directors, the process of rehearsal and creating character and the approach towards performance of Shakespeare, Pinter, and Beckett. Rigby appeared in the original productions of The Homecoming and No Man’s Land and built a close relationship with Harold Pinter which is described in great detail. There’s also new information about his relationships with Sir Michael Gambon, Douglas McFerrin and others.”

Since its release, the book has garnered over two dozen five-star reviews. Critic Russell Davies comments, “Terence Rigby would be astonished by the sight of himself, I think … His shade, and his memory, have been fortunate in their chronicler. [Rigby’s] almost threatening contradictions speak throughout the whole narrative – no wonder he got on so well with Pinter – but always in a strange harmony with his lovable qualities. As an account of the complexities that can beset an acting life, it’s unparalleled, I think. And the way that the bones of the book are allowed to show through, in the progress of its compilation, seems absolutely right. Surely it is destined to be a ‘real’ book, rather than a virtual book. The sheer solidity of Rigby requires hard covers.”

R.M. Alexander adds, “Playwright Juliet Ace has written an affectionate and admirably researched memoir of the late Terence Rigby. Although well known to the general play-going or TV-watching public as well as theatre icons such as Peter Hall and Michael Gambon, few observers have made comprehensive sense of Rigby who strictly compartmentalised his life. This is where his biographer has provided an innovative and comprehensive three dimensional picture of the man – warts and all.”

Juliet Ace (born 27 June 1938) is a dramatist and playwright who wrote for EastEnders and The District Nurse. She has contributed many original scripts and dramatisations to BBCRadio drama, including The Archers. Her screenplay for the Welsh film Cameleon[1] saw the movie win the Golden Spire Award for Best Dramatic Television Feature at the 1998 San Francisco International Film Festival it was shown at Cannes and invited to the Edinburgh Film Festival (where it was given four stars by The Scotsman).

Juliet Ace was the third daughter of Charles and Glenys Ace, born and raised in Llanelli, Carmarthenshire in South Wales. She was educated at Llanelli Girls’ Grammar School, City of Coventry Training College[3],where she specialised in Drama and Art, and then trained at Rose Bruford College of Speech and Drama.

In 1979 Ace won a Gulbenkian Foundation/Arts Council of Great Britain Award to work with professional directors and actors on new writing. As a result of this workshop her first play, Speak No Evil was produced first as a stage play in Bristol and then as a radio play, directed by Enyd Williams. It was nominated for a Pye Award.

After her early work in radio she moved into television, where she worked with Julia Smith and Tony Holland and was taken from The District Nurse series to the creation of the BBC’s EastEnders.

In 1988, her play A Slight Hitch was included in the Oxford University Press collection, New Plays, Volume 1edited by Peter Terson, which included plays by Terson, Arnold Wesker and Henry Livings.

Ace’s book about the actor Terence Rigby, Rigby Shlept Here: A Memoir of Terence Rigby 1937-2008, was published in November, 2014, and the actor and director Peter Eyre described it in his review as ‘a fascinating and unusual memoir of a fascinating and unusual actor … There is unknown and detailed documentation of his work with Pinter, Peter Hall and Ian McKellen, among others, some of it quite shocking. This book should be read by anyone who likes the theatre.’[9] It includes diary entries from Ace covering decades of her friendship with Rigby, interviews with colleagues such as Michael Gambon, and letters and extracts from an attempted autobiography by Rigby, interrupted by his early death.

Juliet Ace lives in London. In September 2014 she was made a Fellow of the renamed Rose Bruford College of Theatre & Performance, in a ceremony which also made Katie Mitchell and Jenny Sealey Honorary Fellows.