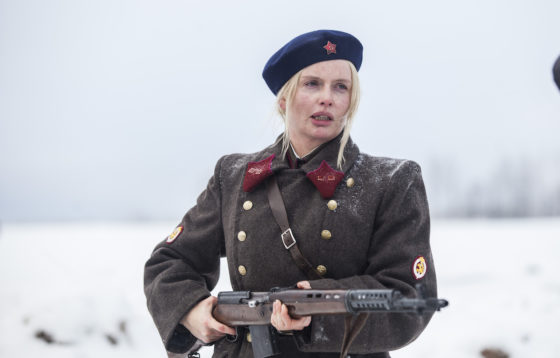 Happy Birthday to the Russian Resurrection Film Festival! This year, one of Australia and New Zealand’s favourite film festivals is back and better than ever!

The festival has released a sneak peek of the lineup, confirming some of this year’s most anticipated Russian films. Sobibor and Selfie, the latest two films by Russian actor, Konstantin Khabensky, have been confirmed, as well as The Last Warrior, a captivating new fantasy film, Ice, a figure skating melodrama, Night Shift, a raucous comedy about male strippers, and Coach, Danila Kozlovsky’s directorial debut. Kozlovsky cleverly aligned Coach to release just before this year’s FIFA World Cup in Russia.

“Russian Resurrection is thrilled to be celebrating our 15-year anniversary this year and is looking forward to showcasing the best of Russian cinema with audiences across Australia and New Zealand in November. We have already locked in a wonderful selection of new Russian films and will be announcing more in coming weeks,” said Festival Director Nicholas Maksymow.

Following the success of the World Cup this year, the festival will be screening the popular new sports drama Coach. Directed by Danila Kozlovsky, who also plays the main role, Coach tells the story of a professional soccer player who, after being forced to leave the national team, takes on the job of coaching a small-town provincial team. The cast also includes Irina Gorbacheva, notable for Arrhythmia, one of the most popular films from last year’s program.

Selfie is a 2018 Russian thriller directed by Nikolay Khomeriki, and starring Konstantin Khabensky and Feodor Bondarchuk. The film follows popular writer and TV presenter, Vladimir Bogdanov, who has a look alike that takes over his life. This psychological thriller is not just about identity theft, but about something deeper – the doppelgänger tragedy, and how our online personas take up most of our lives.

2018 marks the 75th anniversary of the Sobibor extermination camp mass breakout – the most successful attempt in any World War II camp. New Russian historical drama Sobibor is dedicated to these events. The film is the highly anticipated directorial debut of Konstantin Khabensky. He stars alongside leading Russian and Hollywood actors.

On a much lighter note, Max loses his job at the factory and he takes up the obscure job of a male stripper in order to feed his family. The Kremlin can eat its heart out in this hilarious comedy, Night Shift.

Ice was a huge success at the Russian box office  earlier  this year. The film follows Nadya, an aspirational figure skater. Her hard work,  faith, and perseverance pay off, but, just when her dreams are about to come true, the ice  cracks  beneath her. In order to survive, Nadya must dream-the-dream again and work harder than ever.

New fantasy film The Last Warrior will take audiences to the land of Belogorie, where Russian fairy tale characters, magic, and enchanted sword fights are part of everyday life! Channelling classic fantasy stories like Harry Potter and the Chronicles of Narnia, this film is a must see for lovers of fantasy – both young and old.

Directed by Lera Surkova, new drama Pagans will also screen at this November. Based on the play by Anna Yablonskaya, the film is set inside the confines of an apartment and a drama is played out between family members, mixed with a hidden blind faith in a miracle, following a visit of a devout grandmother. Among this family madness, a tragic love story of a teenage girl unfolds.