events in film GIVE AWAY global films russian arts RUSSIAN FILM FESTIVAL by Caroline Russo | on October 10, 2019 | 0 comments | in Competitions | Like it From big-budget action blockbusters, to razor sharp female-led comedy and edge-of-your seat thrillers, the Russian Resurrection Film Festival is proud to be returning down-under in 2019, bringing with it a smorgasbord of the very best new Russian cinema.

“We’re thrilled to bring you the best Russian cinema of 2019! This year’s program features the distinctive perspectives of Russian filmmakers, showcasing both seasoned cinematic legends and the voices of rising stars,” Festival Director Nicholas Maksymow said. “From scintillating spy thrillers, to irreverent romantic comedies and avant-garde arthouse drama, this is one of our strongest programs yet.”

As is tradition with the Russian Resurrection Film Festival, audiences across Sydney, Melbourne, Perth, Brisbane, Adelaide and Canberra will be treated to a stellar opening night film accompanied by the biggest and wildest opening night party. Leave your inhibitions at the door and dive headfirst into a Russian extravaganza teeming with ice cold vodka, tasty traditional delicacies, dancing and raucous live entertainment.

HHB have 5 admit two in-season passes which are valid for any film screening excluding special events. 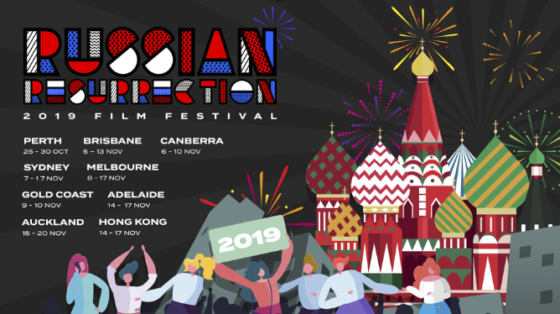 Audiences can also look forward to historical drama Beanpole, which earned director Kantemir Balagov the Un Certain Regard Best Director Award and the FIPRESCI Prize for Best Film. Set during the devastation of World War II in Soviet-era Leningrad, the film is a powerful exploration of the lasting psychological, financial and physical impacts of war on society.

ACTION
Mind-blowing stunts abound in thrill-a-minute spy drama Hero starring local favourite Alexander Petrov (Attraction) as a former Secret Service student forced to run for his life after being double-crossed by his agency; historic-epic Tobol, chronicles a Tsar guard of the Russian Empire’s perilous journey to a distant fortress in wild Siberia where he finds both romance and mortal danger; and the controversial must-see war-drama Leaving Afghanistan, which has drawn criticism from some Russian politicians for its an unvarnished portrayal of the real life events that led to the USSR withdrawal from the Soviet-Afghan war in 1989.

COMEDIES
This year’s program features a stellar selection of comedies including: the razor-sharp Mistresses, an empowered revenge story about three women who team up to take down the philandering ex-lovers of jilted women; Another Woman, a character-driven comedy chronicling a woman’s desperate plot to win back her husband via any means necessary; and How I Became Russian, an irreverent rom-com about the increasingly ludicrous lengths a Chinese man must go to in order to win over the ultra-conservative family of his Russian bride to be.

DRAMAS
Dramas from award winning filmmakers include: Golden Eagle Award winner Valery Todorovsky’s (Hipsters) Odessa, a nostalgic examination of a dysfunctional family forced to spend time together when a cholera outbreak sends their city into lockdown; and Sochi Open Russian Film Festival Grand Prize winner Boris Akopov’s The Bull, a taut arthouse drama set in the 1990s that recaptures the hostile spirit of post-Soviet Russia through the eyes of a young gang leader embattled by his brushes with the law.
Not to be missed are impactful dramas: Temporary Difficulties, a challenging exploration of neglect, resentment and revenge based on a man born with a physical disability and his father; and moving melodrama Above the Sky, a sophisticated and visually resplendent romance about the complex and conflicting emotional experiences of children and their parents during adolescence.

THRILLERS
Edge-of-your-seat nail biters include: Outbreak, a gripping medical thriller about a family trapped in Moscow during the emergence of an unknown killer virus that paralyses the city; and high-stakes disaster thriller Breakaway, about a group of friends whose exciting New Year’s Eve plans turn deadly when their cable car breaks down above an icy abyss.

ANIMATION
Move over Frozen! Kids can look forward to the beautiful and uniquely Russian animation style of Snow Queen: Mirrorlands. In this captivating new instalment to the series, a powerful king loses his family at the hands of the villainous snow queen. He retaliates by banning all magic from the realm – trapping all the magicians in the treacherous Mirrorlands. A non-magical girl must embark on a mission to restore peace and magic to the land.

HORROR
Those yearning for spine-tingling horror will be treated to Kirill Sokolov’s award-winning 2019 Sydney Film Festival title Why Don’t You Just Die. The film chronicles a night of blood spurting mayhem that takes place when a group of disgruntled misfits are brought together under one roof. Set in one apartment, the film is a spectacularly gruesome non-linear carnival of carnage with a wicked injection of dark humour and stylistic nods to Tarantino.

RETROSPECTIVE
RRFF will present three retrospective features from influential Russian director Pavel Lungin’s remarkable catalogue. One of the few Soviet filmmakers to successfully make the transition to the post-Soviet period and to flourish under the new conditions. He has crafted a broad range of films from the masterly, epic tales of The Island (2006), Tsar (2009) Queen of Spades (2016) to hilarious tragi-comedies that capture the real world foibles of Russians from all walks of life and position him as one of the great auteurs of new Russian cinema. In 2019 we explore some of his early works.

Films screening as part of the retrospective program include: Lungin’s debut feature, winner of the 1990 Cannes Film Festival award for Best Director, Taxi Blues about the unlikely friendship between an alcoholic intellectual Jewish musician and a bitter, tormented, vaguely anti-Semitic taxi driver; hilarious melodrama The Wedding, about a couple of high school sweethearts whose dream wedding devolves into chaos at the hands of meddling relatives and a series of unlikely mishaps; and dramedy Roots, about a conman who tricks wealthy Jewish foreigners into purchasing “heritage” trips to meet lost family members abroad, only to have them meet fictional relatives.

Stay up to date with RRFF:
Website: www.russianresurrection.com
Facebook: www.facebook.com/RussianResurrectionFilmFest/
For the Festival Program visit here
For images visit here
Screening links for some films available for review purposes. Please be in touch with Georgina Stegman