“Can Ryan Adams’ Taylor Swift 1989 cover album just get here already?”—BILLBOARD “Could be the album of the year.”—DETAILS

“Not only does Ryan Adams’s 1989 appear to actually exist, but judging by what’s been shared, it could be pretty wonderful.”—GRANT LAND

“Yes, please… Part of the fun of any cover is getting a glimpse into the person, not just the performer. Getting to see what they geek out over, just as we’re geeking out over them. That Adams is a mega-fan of Swift, who also got started as a teenager on the alt-country circuit, albeit in a slightly more wholesome manner, is no surprise but is still perfect.”—VANITY FAIR

“Ryan Adams’ cover of Taylor Swift’s 1989 is almost here… we were starting to fret… Adams posted… that he’ll have a final ‘mix and master’ of the cover album done this week, which means get ready for the most turned down Taylor Swift listening experience of your life. We might be OK, but we’re not fine at all.”—WIRED

Fans who pre ordered the album through iTunes after the announcement immediately received the instant grat track ‘Bad Blood’. For details on 1989’s impending release on CD and vinyl, stay tuned here.

Produced by Adams, the first news of this reinterpretation of 1989 was revealed last month on the Grammy-nominated singer/songwriter’s Instagram (misterryanadams) with the post “Taylor Swift 1989 full album cover night 1. As played by the Smiths.” Several subsequent posts of song snippets revealed much more range than that—including a take on ‘Bad Blood’ that VANITY FAIR called “a lovely Heartbreaker-era style version” referencing Adams’ classic debut, a string quartet-enhanced version of ‘Blank Space’, what Adams promised to be the “guaranteed saddest version of ‘Welcome to New York’ ever – or your tears back,” and more.

Every bit of 1989 music Adams has let out has built excitement and anticipation—not least with Swift herself who tweeted in response to Adams’ informing her that he’d “just finished ’Style’” August 6: “@TheRyanAdams Cool I’m not gonna be able to sleep tonight or ever again and I’m going to celebrate today every year as a holiday. I’M CALM” 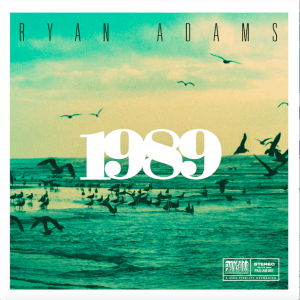