Sony Music Entertainment is pleased to announce that off the back of her incredible performance of ‘Shake That’ featuring Pitbull on The X Factor Australia tonight, Samantha Jade has announced that she will be releasing her debut artist-album NINE on Friday November 20th through Sony Music Entertainment Australia. NINE is available to pre order now – http://smarturl.it/nine.it

NINE is an album of beauty and complexity, which on the surface first blossoms as melodic pop affair, but which slowly reveals its complexities and maturity. Samantha Jade is proud of her passion for pop music, and doesn’t shy away from the wide appeal of her musical style. The songs on offer aren’t trendy, of-the-moment, producer-stamped recordings, but instead deliver fresh, catchy, and instantly-dynamic hooks that revel in joy and positivity.

“When we started to make this album my team at Sony asked me what kind of record I wanted to make and I told them I wanted to make a pop record because that’s what I love. I wanted to make pop music that wasn’t too in your face, and had an influence from a number of styles and tempos. I like all different sides of pop music so I really wanted some diversity from the songs I included on the album.

“Songs like ‘Show Me Love’, ‘Always’, ‘Shake That’, and ‘What You Want’ are very fun pop songs that make you feel like letting go and enjoying the good times, whereas songs like ‘Castle’ and ‘Nine’ are songs to inspire people and to give them strength and courage.”

Recorded in the US and Australia with a team of international writers and producers from around the globe that includes the likes of Babyface (Whitney Houston), The Rascals (Ariana Grande), Jon Levine (Rachel Platten), Mason ‘MDL’ Levy (Justin Bieber), The Fliptones (Britney Spears), DNA (Jessica Mauboy), Tiffany Fred (Jason DeRulo) and Mansur Zafr (Rihanna), NINE is an undeniable collection of heavyweight pop genius. Despite this involvement, it’s the songs themselves that anchor this album, and no more so than on the cornerstone title track ‘Nine’ which reveals the true depth of Samantha Jade’s artistic ability and song writing prowess.
   
“When I wrote ‘Nine’, I wanted to get a sense of positivity in even the darkest moments so it came with the reference of being on cloud 9 or a cat with nine lives. The number 9 has also always been important in our family, and our birth dates have some sort of connection with it too. The song is very organic in that sense and directly from my heart.”

The range of material on NINE is a reflection of a wealth of industry experience which has informed the artist Samantha Jade is today. She isn’t a just a pretty young popstar on the rise, Samantha Jade is a woman of experience, determination, and talent, with something to say. 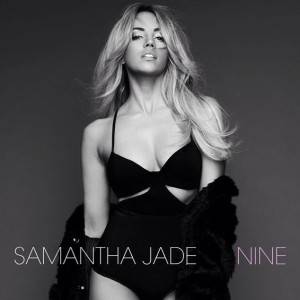