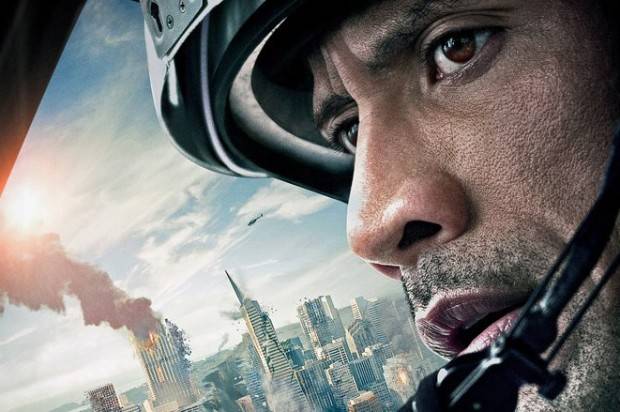 Wearing its ambition to be the biggest disaster movie to date on its sleeve, ‘San Andreas’ offers little in terms of surprises but delivers on spectacle and sentiment with the rock-solid Dwayne Johnson (pun not intended) front and centre and ready to save the world as a cavalcade of CG-enhanced chaos ensues. Oceans swell, buildings topple, and bridges disintegrate as director Brad Peyton ably choreographs the wrath of mother nature amongst a surprisingly effective (as far as disaster movies are concerned) human tale where Johnson’s LAFD helicopter pilot Ray allows the actor to stretch his muscle as both a performer and an action hero.

For the geographically-challenged, the title refers to the near 800-mile fault line that runs through California, and as we are informed by seismologist Lawrence Hayes (Paul Giamatti) early on in the proceedings, a substantial earthquake is predicted to happen every 150 years and as we are 100 years into this interval, it isn’t so much a question of “if” but “when”. Setting up the destructive scenario to come means we have to hear a little sprouting of science talk (appreciatively easy to digest) so it’s quickly explained that a magnitude 7.1 along a previously unknown fault near the Hoover Dam will activate a “seismic swarm” along the titular fault, triggering a 9.1 in Southern California and an even greater 9.6 in San Francisco; the 9.5 that struck Chile in the 1960’s, also known as the Great Chilean earthquake, is currently the most powerful earthquake ever recorded if you needed some context.

As heavy handed and scientific as this all sounds, ‘San Andreas’ is remarkably light and wastes no time on setting up Ray as our seemingly indestructible hero as he flies through downtown Los Angeles to rescue his soon-to-be-ex-wife Emma (Carla Gugino) from the first gravity-shaking occurrence; the film’s extreme mentality at play here as it delivers not one but two earthquakes in the near 2-hour runtime. Opting to focus solely on Ray and Emma’s plight, as well as the perilous situations their college-aged daughter Blake (Alexandra Daddario) finds herself in, ‘San Andreas’ benefits from downsizing its focus to just a few core players, allowing the audience to actually invest in these characters along the way, which also includes the brotherly duo of Ben (a charming Hugo Johnstone-Burt) and Ollie (Art Parkinson), two British lads who take a fancy to Blake only moments before the first quake hits; Ioan Grufford as Emma’s spineless new boyfriend manages a few minor cutaways throughout, the best being his “reward” for abandoning Blake when they are initially trapped together in an underground parking lot.

To call ‘San Andreas’ clichéd would be an understatement, but the film isn’t striving to break the mould within the disaster genre, it merely wants to play with it and test the limits, and director Peyton creates some truly spectacular imagery throughout. As Johnson does the heavy-lifting both physically and emotionally, Peyton’s work feels like that of a kid in a candy store as the destruction of the Los Angeles skyline, the fracturing of the Hoover Dam, and the eventual obliteration of the San Francisco Bay flow on-screen with a natural terror, culminating in the ultimate exhibition that is a giant tsunami crashing into the Golden Gate Bridge (amongst other things) bringing cruise ships and container tankers along for the ride. Though set in California, the majority of the feature was filmed here in Queensland, with Brisbane and the Gold Coast substituting for the West Coast of the US, and though us eagle-eyed locals might be able to pick out a scene or two featuring familiar locales, ‘San Andreas’ never feels like anything less than an international production; the homegrown connection is likely to explain the inexplicable stunt casting of poppet Kylie Minogue though. Foregoing her Aussie accent, Minogue braves an admirable American inflection and adopts the harshest of gazes as Emma’s could-be sister-in-law, but it’s unsurprising that her appearance is over before it begins.

As “been there, done that” as ‘San Andreas’ is, a feeling that seems to follow all disaster films of recent memory, there’s no denying how much fun there is to be had in the ridiculousness of the film that manages to imply the deaths of millions of innocents without batting an eye – just as long as the handful of people the script wants us to care about make it out with minor scrapes and injuries. It isn’t overly dramatic (give or take an obligatory American flag shot) nor unnecessarily sentimental, and if there’s anyone you want to watch save the world, it might as well be the hulking frame of Dwayne Johnson, a man who knows his limits as a performer and what to deliver in a genre he is marking as his own.