On the surface everything about ‘Savages’ made it appear like it was tailor-made for success; the casting looked solid, the novel it’s based on was unanimously praised by critics, and you have Oliver Stone back to working on the gritty material that had been so sorely absent from his recent pictures.  Yet all these ingredients haven’t meshed well and what we are left with is truly one of 2012’s biggest disappointments. 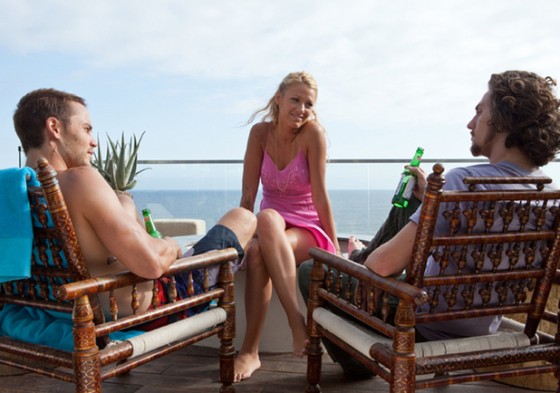 After missing the mark with the expensive mess that was ‘Alexander’ and underwhelming his audience with ‘World Trade Center’, Stone was showing signs that his role as director was waning as his material became less extreme than its predecessors, so the prospect of him directing the adaptation of the best-selling crime novel ‘Savages’ appeared like a step back in the right direction, bringing to mind the success he found with the visceral ‘Natural Born Killers’ in 1994.  If only we were that fortunate.

In ‘Savages’ we follow the unconventional relationship of Chon (Taylor Kitsch) and Ben (Aaron Johnson), two marijuana growers living a rather luxurious life in California’s Laguna Beach.  Ben is the more level-headed of the two, he has all the makings of a hippie (made complete by his dreadlocked appearance and ‘save the universe’ mentality) but holds a degree in business and botany.  Chon, fresh off tours in Iraq, is wired, aggressive and always willing to solve a problem with violence.  Together they essentially balance each other out and so in their minds it makes sense to share one girlfriend – O (Blake Lively).  As we are informed in the opening moments of the film via narration from O, all is not going to end well for our threesome so when they reject an offer to partner with cartel enforcer Lado (Benicio Del Toro, chewing the scenery like he’s starving) you can sense the danger that will befall them.

Seeking out advice from a corrupt DEA agent (John Travolta), Ben and Chon are adamant about not associating themselves with the cartel, but their plans backfires when they are informed of O’s kidnapping and cartel leader Elena (Salma Hayek) contacts the boys in hopes of changing their minds, reminding them she has their beloved O and she’s not afraid to hurt her.  Despite being fully aware of what the cartel is capable of Ben and Chon take matters into their own hands and an all-out war is brought about.  At this point in time we have already been subjected to countless graphically violent images and a duo of sex scenes that push the films MA15+ classification, but in true Stone style it only escalates as the film continues and it almost appears as if he thought adding in as much adult content as he could would distract the audience from realising just how poor the whole production is.  And even if he was succeeding there’s no escaping the frustration endured regarding the films climactic moments.  I don’t want to spoil anything but I dare say you’ll be hard pressed to find another sequence this year that irks you quite as much.  Cinematic deception at its finest.

I really wanted to like ‘Savages’, and to give the film credit I was happy going along with it before the aforementioned ending, but ultimately it just left me frustrated and empty, something a film from Oliver Stone should never do.

My rating 2/5 (Too much style, not enough substance)