A monster that leads you through nightmares on TikTok, a choose-your-own adventure interactive romantic comedy, and a third season of hit YouTube series Meta Runner are among the latest online projects to be supported by Screen Australia. The nine projects will share in $1.8 million of online production funding.

Screen Australia’s Head of Online, Lee Naimo said: “We’ve been blown away by the volume of great applications coming in this year and we are proud to announce such a large slate of projects as part of Screen Australia’s ongoing commitment to online storytelling. Covering platforms from YouTube, Facebook and IGTV to TikTok, VR and even a bespoke smartphone app and website, the assortment of release platforms speaks to the ingenuity of online creators when identifying and finding their audiences. These projects showcase the depth of local talent working in the online space, as well as the broad range of genres cutting through to online viewers.”

THE FUNDED PROJECTS ARE:

1 For All Seasons 4 and 5: The popular YouTube series, which has gained over 16 million views online, returns to continue the ‘roll of the dice’ adventure, an homage to Dungeons and Dragons. The team continue the series with 12 new episodes. Three inept adventurers will botch more dangerous quests, befriend terrifying monsters and leave chaos in their wake. Writer/director Elliot Ryan (1 For All) and executive producer/cinematographer Goldie Soetianto (Water Horse) once again team up with producer Vincent Power. 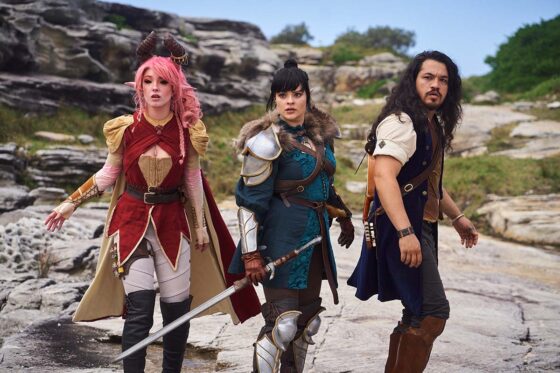 Childish Deano: A six episode animated comedy about a rambunctious 8-year-old boy with a grown man’s voice and a heart of gold. Deano lives for mischief but he is so charming and full of life that people can’t help falling in love with him. Inspired by writer/director/producer Dean Thomas’ own childhood, the series will explore issues including racism, socioeconomic prejudice, Aboriginality and bullying. Dean Thomas, who is best known as a presenter on the Chrissie, Sam and Browny breakfast show on Nova, has teamed up with writer/director/producer David Ferrier, producer Amanda Reedy (Superwog) and executive producer Adele Thomas. This project will release on Facebook and IGTV.

Black AS Rebooted: Picking up from the popular TV series Black AS, this eight-part series will follow the Black AS boys on their ride into the heart of Arnhem Land, as they traverse their ancestral lands on the hunt for adventure and a good feed. Each episode delivers insights into their bush knowledge, innovative car fixes, survival skills and a healthy respect for their ancient ways, celebrating what it is to be a young fella in the bush today. Behind the wheel are the creators and writers David Batty (Black AS Season 1, Season 2) and the Black AS boys; Dino Wanyabarrnga, Chicko Wanyabarrnga, Jerome Lilypiyana and Joseph Smith. They are joined by producer Steve Crombie and David Batty will direct. This project will release on TikTok and YouTube through Totem Network.

Crossing Paths: An interactive film that allows viewers to choose their own adventure as they follow the interconnecting lives of 12 characters over the course of a day. With over 700 different combinations of journeys, the story takes place over a lazy Summer Saturday and follows the intertwining mix of housemates, lovers, mates, friends of friends and perfect strangers. Writer/director JJ Winlove (June Again) will team up with producer Emily Bull (Rocky & Me) in this romantic comedy. The project will be released on a bespoke website and also available on Smartphone.

Meta Runner Season 3: The third season of Glitch Productions’ highly successful animated series picks up right where it left off as MD-5 grapple with the repercussions of TAS-Corp’s downfall and the discoveries they have made into their own lives. Follow Tari in this eight-part series as she delves deeper into the conspiracies of her past while competing for the survival of both her friends and herself. The season sees the return of Meta Runner writer Jasmine Yang (Meta Runner Season 2), director Matthew Peckham and producers Kevin Lerdwichagul (Meta Runner 1) and Luke Lerdwichagul (Sunset Paradise). The season will release on YouTube where Meta Runner has already amassed over 20 million views.

Sorella’s Story: This immersive 360-degree film tells the true story of the thousands of Jewish women and children who perished at the hands of Nazi collaborators during the Holocaust, on the cold beach of Skede in Latvia. The story is narrated by 11-year-old Sorella as the audience witnesses her family’s final journey. Sorella’s Story is written, directed and produced by Peter Hegedus (Lili) and produced by Jaclyn McLendon and Bobbi-Lea Dionysius. The film is financed in association with Griffith University, with finance support from Screen Queensland and in-kind support from Griffith Film School.

The Future Of Everything: An absurdist anthology series that projects Australia into alternate versions of the future, challenging toxic masculinity, housing affordability, online radicalisation and internet dependency through a satirical lens. This five-part series of animated shorts is based off the popular Instagram comics of accomplished animator Mike Greaney (Supaphresh) and is produced by Nicholas Colla (Rebooted) and Nicolette Minster (The Girl At The Window). The Future of Everything will be released on IGTV.
The Monster With Me: From the popular TikTok channel, Shortest Blockbusters, which has generated more than 2.5 billion views and attracted over 12 million followers, comes a 10-part short horror anthology series. Featuring a monster that leads viewers through terrifying and immersive surreal experiences, this animated series is set to make the audience face their deepest fears through terrifying nightmares whilst awake. Writer/director/producer Artin Rain (Shortest Blockbusters) teams up with producer Lucy Hayes (Lost & Found).

Triple Oh!: Inspired by real people and true stories, Triple Oh! is a dark comedy-drama about a mismatched pair of queer ambulance paramedics who get hands-on with life, death, and each other. Director and producer Poppy Stockell (Searching 4 Sandeep) joins forces with writer Erica Harrison (A Cautionary Tail) and executive producer Julie Kalceff (First Day). The six-part series will be primarily released on the YouTube Channel, OML (One More Lesbian).