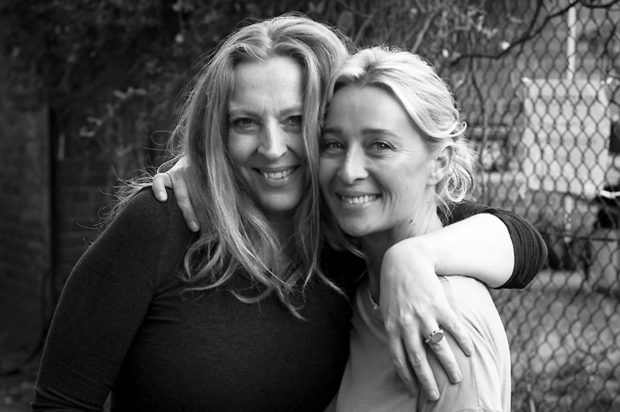 Imogen Banks and Asher Keddie on The Sisters Antipodes

The slate includes a new feature film from Abe Forsythe, Jodi Matterson and Bruna Papandrea (currently untitled) based on a real missing person case in a remote Northern Territory town; a television series produced by Asher Keddie and Imogen Banks (Offspring) about estranged families who are pushed to opposite sides of the world in The Sisters Antipodes; and an online series from writer/director Kauthar Abdulalim about a mother who sets her sights on winning the Australian Open in Salma and the City.

Screen Australia’s Head of Development Nerida Moore said: “It’s fantastic to see such strong applications coming through, and in this round we’ve noticed an increase in series as well as a lot of female writers attached to projects.”

“We have 17 female writers attached across 11 of the projects, including new talent driving fresh online comedies with Caitlyn Staples on Nark Mikoladis the Trading Card King and Claudia Pickering on Cheetah Airways. We also have a number of established writers bringing their experience to distinctive new projects, including Lou Sanz working on her first feature Audrey and Fiona Seres adapting true events for television in The Sisters Antipodes.”

THE PROJECTS FUNDED FOR DEVELOPMENT INCLUDE

Audrey: A feature film from Invisible Republic about frustrated mother Ronnie who lives vicariously through her two daughters. When her daughter Audrey ends up in a coma after an accident, Ronnie has no choice but to follow her own dreams of becoming an actor. Director Natalie Bailey (Damned) and writer Lou Sanz, both working on their first feature, will team up with producer Michael Wrenn (Slam) and executive producer Jenni Tosi from Princess Pictures on this dark comedy.
Cheetah Airways: A six-part online series by comedy troupe Frothpocalypse which will go behind the scenes of a dodgy budget airline following the corporate big-wigs, flight attendants, baggage handlers and check-in staff as they deliver the worst customer service experience imaginable. Comedy filmmaker Claudia Pickering, fresh off the back of her webseries Resting Pitch Face, will write, direct and produce this project. She will be joined by Emma Leonard as writer/producer, Prudence Vindin as writer, Catherine van der Rijt as producer and Luke Eve (High Life) as executive producer.
Last Man Standing: A feature film from Deeper Water Films about the story of iconic athlete Steven Bradbury, the underdog who overcame insurmountable odds in his quest to win Australia’s first ever Olympic Winter Games Gold Medal. This is a new project from the seasoned team who have recently completed the feature Danger Close, including writer Stuart Beattie, director Kriv Stenders and producers John Schwarz and Michael Schwarz.
Nark Mikoladis The Trading Card King: A six-part online comedy following 26-year-old Angie who, after discovering that a rare Pokemon card is now worth a mini fortune, begins a quest to reclaim the card from the primary school bully who stole it from her 15 years ago. This adventure into nineties nostalgia will be written and created by comedian Caitlyn Staples, with comedians Jayden Masciulli, Ryan Zorzut, Mario Hannah and Elyce Phillips also attached as writers. It is the first project outside of Aunty Donna from the group’s production arm Haven’t You Done Well Productions.
Salma and the City: A six-part online series by writer/director Kauthar Abdulalim and producer Tony Jackson (You See Monsters) from Chemical Media. This project tells the story of a 45-year-old Australian-Pakistani mother who suddenly decides it’s time to chase her dream of winning the Australian Open, which means battling family expectations, gender stereotypes and centuries of tradition before she even meets an opponent on the tennis court. Told in Urdu and English, this comedy follows a woman’s journey of reinvention as she makes a choice between what people expect of her and what she demands of herself.
The Force (working title): An eight-part television series from No Coincidence Media centred on a team of ambos, police officers and firefighters who must work together to serve the community, but their rivalry to be the hero stands in the way. This comedy brings together writer/producer Mitchell Stanley and director Dena Curtis who have worked together previously on Colour Theory Underground, as well as writer Steven Oliver (Black Comedy). Script producer Jodi Molloy (The Jaquie Brown Diaries) and story consultants Shari Sebbens (Top End Wedding) and Rachel House (Hunt for the Wilderpeople) are also attached.
The Sisters Antipodes: A six-part television series from Endemol Shine Banks which follows true events from the 1960’s when two couples switched partners and as a result, two little girls were given each other’s fathers. The scandal pushed the realigned families to opposite sides of the world and it was seven years before they saw each other again. Based on an intimate memoir of the same name by Jane Alison this drama is presented by an all-female team, including acclaimed actor Asher Keddie producing alongside the renowned Imogen Banks (Offspring). Fiona Seres (Puberty Blues) and Rebecca Rigg are attached as writers.
Untitled Abe Forsythe Project: A feature film from the team behind Little Monsters, including writer/director Abe Forsythe and producers Jodi Matterson, Bruna Papandrea and Steve Hutensky from Made Up Stories. Inspired by a true missing person case, this mystery drama centres on a remote Northern Territory town where everyone is a suspect. Margot Robbie and Tom Ackerley from LuckyChap Entertainment and Emmy-nominated Janice Williams are also on board to produce.
Zac Power The Movie: An animated feature film based on the best-selling children’s book series of the same name. This family adventure film sees teenage spy Zac Power disobey orders to embark on a rogue mission against a crazy super-villain, risking everything in an attempt to rescue his kidnapped parents and save the world from being sucked into a black hole. Presented by Cheeky Little Media, this project will be written by John Armstrong (Beat Bugs), directed by David Webster (Spongo, Fuzz & Jalapeña), and produced by Barbara Stephen (Blinky Bill the Movie), Patrick Egerton (Spongo, Fuzz & Jalapeña) and Celine Goetz (Kazoops!).