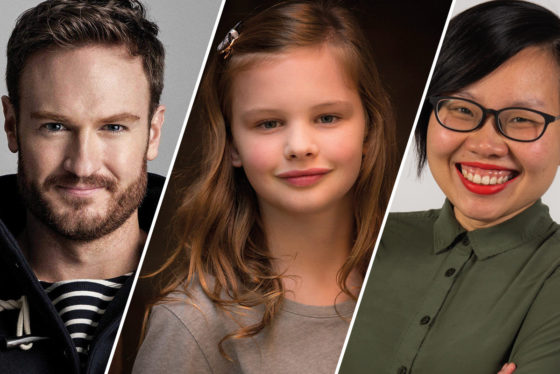 “Leah Purcell has an impressive body of work, telling powerful stories from behind and in front of the camera, and we’re thrilled to support her first feature as director and lead. The Drover’s Wife: The Legend of Molly Johnson is a brutal and beautiful story of identity, and there’s no one better to tell it on screen.”

“It’s also exciting to support some stories which offer viewers a chance to connect with Australian experiences and perspectives that are rarely seen on our screens. In First Day we see an authentic portrayal of personal growth and acceptance; and Girl, Interpreted, a bilingual comedy series about a Mandarin interpreter in Melbourne, brings humour that carries across cultural boundaries. I’m confident these will resonate with viewers,” Mason continued.

THE FEATURE FILM PROJECTS ARE

Run Rabbit Run: A modern day ghost story from director Daina Reid (The Handmaid’s Tale) and writer Hannah Kent, acclaimed author of the award-winning Burial Rites. The film follows Sarah, a fertility doctor, who is frightened by her young daughter’s inexplicable memories of a past identity. This feature will be produced by Carver Films’ Sarah Shaw and Anna McLeish (Relic, Snowtown) who previously worked with Reid on the SBS drama series Sunshine. Run Rabbit Run received development funding under Screen Australia’s Gender Matters Brilliant Stories initiative and will be the third feature from the initiative to go into production. This project received major production investment from Screen Australia and 30WEST, in association with Film Victoria and the South Australian Film Corporation.
The Drover’s Wife: The Legend of Molly Johnson: A film adaptation of Leah Purcell’s award-winning stage play and reimagining of Henry Lawson’s classic short story. Set in the Snowy Mountains of NSW in 1893, the film follows Molly Johnson as she and her children struggle to survive the elements. Molly forms a bond with run-away man Yadaka, who helps her to understand her true identity. This revenge Western asks the question, how far will you go to protect the ones you love? It is written and directed by Purcell who will also star as Molly, alongside Rob Collins as Yadaka. The producers are David Jowsey and Greer Simpkin whose credits include Mystery Road and Sweet Country, as well as Bain Stewart (She.Say.). The project has received development support from Create NSW.
Tin: A romantic comedy and second feature from writer/director Josh Lawson (Little Death) who is collaborating again with producer Jamie Hilton (Breath) as well as Michael Pontin (Standing Up For Sunny) and Isabel Stanfield. This film tells the story of time-poor Teddy who wakes up the morning after his wedding to discover that every few minutes he is jumping forward to the next year. Teddy must use every precious moment wisely to keep from losing the love of his life, and to learn to love the life he’s losing. This project is financed with support from Create NSW, Spectrum Films and Cumulus.
The full list of funded feature film blocklines can be found here

THE CHILDREN’S TELEVISION PROJECTS ARE

First Day: A four-part series which follows 12-year-old transgender girl Hannah as she navigates the challenges of starting high school and finding the courage to live her most authentic self. The series is based on the stand-alone episode created in 2017 through Screen Australia and ABC Children’s Girls initiative, a funding program to uncover and support the next generation of Australian female content makers. The episode won the inaugural MIPCOM Diversify TV Excellence Award for Kids’ Programming and the Gender Equity Prize at the prestigious Prix Jeunesse International Children’s Television Festival in 2018. The series is written and directed by Julie Kalceff, creator of hit online drama Starting From Now, and will star Evie Macdonald as Hannah. Producers Kirsty Stark (Unboxed) and Kate Croser (Top End Wedding) and co-producer Kate Butler are also attached. This project is commissioned by ABC Children’s and financed with support from the South Australian Film Corporation and the Australian Children’s Television Foundation.
Kangaroo Beach: A 26-part animated series centred on the adventures of four junior lifeguards – joey Pounce, koala Frizzy, wombat Neville and platypus Gemma. The furry friends are never far from fun, or danger, but under the guidance of grown-up lifeguards the young cadets are on their way to becoming pint-sized heroes of Kangaroo Beach. Each episode has an important water safety message, and consulting on water safety information will be Bruce ‘Hoppo’ Hopkins (Bondi Rescue) and Craig Riddington of Surf Educators International. This series is created by Tim Bain who has written for global hits such as PJ Masks, Fireman Sam and Thomas the Tank Engine. The writers are Tim Bain, Charlotte Rose Hamlyn (Blinky Bill), Simon Dodd (Spongo, Fuzz & Jalapena) and Samantha Carroll (The Deep). Also on board are producers Celine Goetz and Isla Curtis, and executive producer Patrick Egerton from Cheeky Little Media (Kazoops!). Kangaroo Beach is commissioned by ABC Children’s and is financed with support from UYoung Media.
The full list of funded television drama blocklines can be found here

THE ONLINE PROJECTS ARE

Girl, Interpreted: A 5 x 5-minute bilingual comedy series for YouTube about Lillian, a pedantic Mandarin interpreter eager to impress in her new job in Melbourne. Inspired by writer/director Grace Feng Fang Juan’s professional experience as an interpreter, the series follows Lillian as she is reluctantly caught in a tussle of cultures and words during the most unexpected assignments. It is produced by Nikki Tran off the back of her online dramedy FRESH!, and executive produced by Stuart Menzies (The Cry). Girl, Interpreted is financed with support from Film Victoria.
Meta Runner: A 10 x 12-minute animated series for YouTube set in a future where video games are everything, and technologically-enhanced e-sports competitors known as Meta Runners reign supreme. The series follows Tari, a young Meta Runner, as she weaves her way through this high-stakes and sometimes dangerous world where everyone wants to be number one. It is presented by writer/director Luke Lerdwichagul and writer/producer Kevin Lerdwichagul, creators of the highly popular YouTube channel SMG4. Meta Runner has received completion funding from Screen Australia and is financed with support from Epic Games and AMD