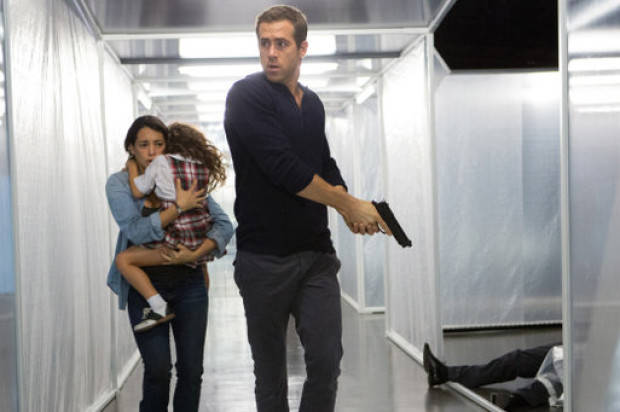 Sometimes I wonder what kind of career Ryan Reynolds would’ve had if 2011’s ‘Green Lantern’ had succeeded. That film failed to capitalise on any comic-book-to-movie hype the genre had going for it, and the general abysmal reaction both critically and commercially seemed to of almost blackballed the actor in the leading man stakes. Though he’s had his share of “star vehicles” in the years since, many of them have failed to connect with audiences and, sadly, ‘Self/Less’ is another plodding step in his career path. Though he has little to do in the feature, it should be noted that the film itself is surprisingly not as awful as one would expect given its rather low-rent entrance into the theatres.

Working with an intriguing-enough premise to satisfy a 100+minute running time, ‘Self/Less’ introduces us to terminally ill billionaire Damian Hayes (Ben Kingsley) who is fast approaching his final days on account of his cancer diagnosis. Learning of a treatment known as “shedding” Hayes gets his affairs in order so that he can “die”, only to be reborn in a younger body; his consciousness transferred to a newer model free of flaws. All seems to go to plan rather smoothly as the new Damian, now known as Edward (Reynolds), learns the ins and outs of new-found vitality, and promptly sets up shop in a swanky New Orleans estate. After an initially stimulating forty minutes-or-so, where it’s alluded to that Damian’s new body may not be all that it appears to be, ‘Self/Less’ descends into familiar territory as it adopts a ‘Bourne Identity’-type mindset placing Edward on the run as he looks to uncover the conspiracy behind the “shedding” program. Hand-to-hand combat, a car chase or two, and a neat sequence involving a flame thrower proceed to fill up the time as Edward learns who he really is, leading him to meet Madeline (Natalie Martinez), who knows Edward by face but not nature.

Director Tarsem Singh (‘The Cell’, ‘Immortals’) usually displays an eye for theatrical visuals, so it makes ‘Self/Less’ all the more ordinary that his direction is void of flare, not to mention the movie-borrowing he appears guilty of with the aforementioned ‘Bourne Identity’ and the Arnold Schwarzenegger actioner ‘The Sixth Day’ both obviously influential in terms of narrative. It doesn’t help either that as likeable as Reynolds is, there’s little-to-no-continuity in his performance against his former self in the form of Ben Kingsley. Never once do we feel like we are watching the same character as the seemingly meek Damian never displays the type of brawn that Edward possesses; the film tries to get away with this as it explains a little about muscle memory and the subconscious of a pre-Damian inhabited Edward but it’s not enough to justify his killing spree. Kingsley delivers a satisfactory performance though, but as to be expected he disappears from the film all together once he’s transferred to his new body. In addition to Reynolds and Kingsley, there’s a surprisingly decent support cast on hand with Derek Luke (as one of Edward’s new friends), Matthew Goode (all too convincing as the snide doctor in charge of the body swapping process) and ‘Downton Abbey’s Michelle Dockery (as Kingsley’s disapproving daughter); Dockery is severely sidelined though in a role I suspect has traces left on a cutting room floor somewhere.

Disposable but still watchable, ‘Self/Less’ is likely to come and go in cinemas without much fuss; it’s entertaining enough to warrant a viewing but simultaneously unremarkable that you won’t be missing out on anything stellar if you bypass it in theatres and wait for it on DVD – a destination I imagine this film will have more of a lifespan. I ventured into the film with zero expectations; I suggest you do the same if you wish to exit on somewhat of a satisfied high.