DOCOMENTARY ivew shaun micallef by Caroline Russo | on November 7, 2019 | 0 comments | in Film | Like it 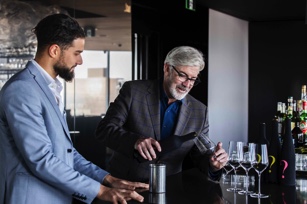 ABC and Screen Australia today announced a new 3 x 60’ documentary, Shaun Micallef’s On The Sauce, to be hosted by award-winning ABC favourite, Shaun Micallef, and produced by CJZ.

Shaun Micallef drank neither wisely nor well back in his university days and swore off it in his mid-twenties. Now his sons have hit drinking age, it’s got him thinking – what kind of national drinking culture are they getting into?

In this timely documentary Shaun looks beyond clichés and misconceptions to discover the new face of alcohol in Australia. It’s changing rapidly, right under our noses.

“Personally, I’ve never quite understood alcohol. I don’t get it. It tastes funny and I’m not very good at it. Two glasses of beer and I’m under the table. So about thirty years ago, I decided I’d be better off without it. But I have children now of drinking age, and I’m wondering what advice I can give them about drinking if I don’t understand it?” says host Shaun Micallef.

Across the series, Shaun explores Australia’s long and torrid love affair with alcohol and journeys around the country meeting people whose lives have been touched by alcohol in good ways and bad.

Head of Entertainment Josie Mason-Campbell said: “Shaun Micallef has one of our most curious and interesting minds. We’re proud to work with Shaun on this deeply personal journey. Shaun will traverse Australia to get to the heart of our relationship with alcohol in this timely and important factual series.”

Screen Australia’s Head of Documentary Bernadine Lim said: “Australia’s relationship with alcohol is an important topic, and with Shaun Micallef’s willingness to use his personal journey as a vehicle to prompt broader national discussion, this documentary will encourage viewers to reflect on different perspectives.”

Shaun Micallef’s On The Sauce was announced today at the ABC 2020 Content Reveal and will air on ABC and iview in 2020.